NEW YORK (IDN) – A deafening chorus of negative grumbling from the left, right, and center of the U.S. political spectrum in response to Trump’s decision to remove U.S. troops from Syria and halve their numbers in Afghanistan appears to have slowed down his attempt to bring our forces home. [2019-01-09 | P18]  CHINESE | JAPANESE TEXT VERSION PDF | KOREAN COPENHAGEN | SANTA BARBARA, CA (IDN) – One of the five “M’s” can trigger a nuclear war any time: malice, madness, mistake, miscalculation and manipulation. "Of these five, only malice is subject to possibly being prevented by nuclear deterrence and of this there is no certainty. But nuclear deterrence (threat of nuclear retaliation) will not be at all effective against madness, mistake, miscalculation or manipulation (hacking)," David Krieger tells John Scales Avery in an exceptional interview. [P 16] BAHASA | JAPANESE TEXT VERSION PDF | THAI

NEW YORK (IDN) – The Trump administration’s increasingly cozy relationship with Saudi Arabia has led to widespread speculation that the United States may be assisting the Saudis – directly or indirectly – to achieve their long term goal of acquiring nuclear weapons.

The speculation has been triggered by ongoing secret negotiations between the two countries to help Saudi Arabia gain access to nuclear energy in a proposed deal estimated at over a hefty $80 billion, according to a front-page story in the New York Times November 23. [P 15] ARABIC | GERMAN |  JAPANESE TEXT VERSION PDF | MALAY

The Threat or Use of Nuclear Weapons Violates the Right to Life, Warns a UN Committee

GENEVA (IDN) – The threat or use of nuclear weapons is "incompatible with respect for the right to life" and "may amount to a crime under international law," warns the UN Human Rights Committee's new General comment No. 36 (2018) on Article 6 of the International Covenant on Civil and Political Rights (ICCPR), on the right to life, adopted on October 30, 2018. [P 14] BHASA | HINDI | JAPANESE TEXT VERSION PDF | NORWEGIAN | SWEDISH NEW YORK (IDN) – "If one had to pick a single word to describe this year's First Committee, contentious would be a reasonable contender. The increased volume – in all senses of the word – of accusations and denials has descended as close to name calling as diplomatic forums get," says Ray Acheson, the Director of Reaching Critical Will in an editorial in November 5 issue of The First Committee Monitor 2018. [P 13] ARABIC | GERMAN | JAPANESE TEXT VERSION PDF 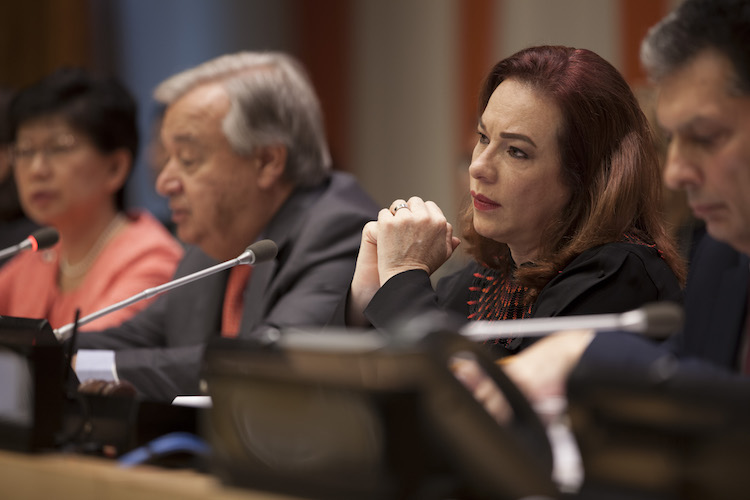 NEW YORK (IDN) – The United Nations has pursued the goal of nuclear disarmament since the adoption of the very first General Assembly resolution in 1946. But aware that countries possessing nuclear weapons have well-funded, long-term plans to modernize their nuclear arsenals, in 2013 the UN declared September 26 as the International Day for the Total Elimination of Nuclear Weapons. [P 11] JAPANESE TEXT VERSION PDF | SPANISH | THAI TOKYO (IDN) – Japan's profound interest in the international community's efforts to help usher in a world free of nuclear weapons was underlined in the run-up to the commemoration of the International Day for the Total Elimination of Nuclear Weapons on September 26, which was observed first time in 2014 in accordance with a decision of the UN General Assembly. [P 10] ITALIAN | JAPANESE TEXT VERSION PDF | SPANISH