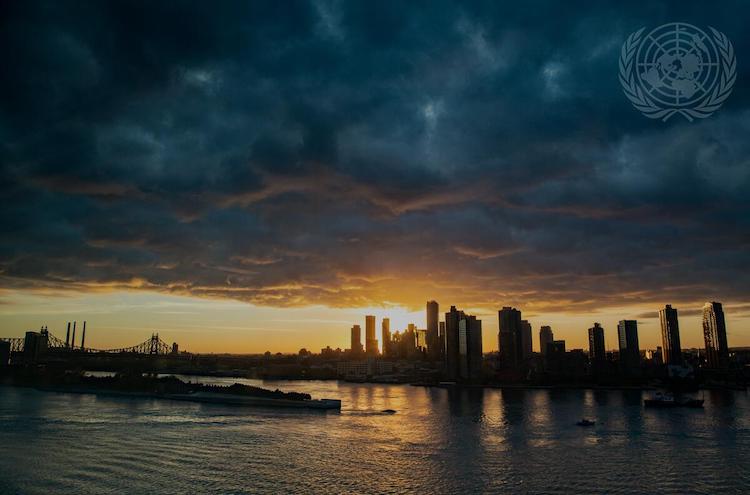 Photo: The Sun rises behind Long Island City skyscrapers at dawn of the first day of the general debate of the General Assembly's seventy-sixth session (2021). UN Photo/Mark Garten

UNITED NATIONS (IDN) — The devastating war in Ukraine—now moving towards the third month—has triggered several threats of the “nuclear option”.

The battle, which began with the Russian invasion of Ukraine on February 24, is between one of the world’s major nuclear powers and a neighboring non-nuclear country. [2022-04-27-02] CHINESE | JAPANESE TEXT VERSION PDF | RUSSIAN | SPANISH

The latest implicit threat comes from Russian Foreign Minister Sergei Lavrov who warned April 25 that the possibility of a nuclear conflict “should not be underestimated”.

“Everyone is reciting incantations that in no case can we allow World War III,” he was quoted as saying in a Russian television interview. “The danger is serious," he said. "It is real.”

The crisis in Ukraine has also revealed the UN's limitations in the "maintenance of international peace and security” as spelled out in the UN charter.

As the conflict continues to spiral out of control, the United Nations has come under heavy fire for its inability to bring the crisis to an end or even help negotiate a cease-fire—despite Secretary-General Antonio Guterres’ one-on-one meeting with Russian President Vladimir Putin in Moscow on April 26.

Judging by these developments, there is a related question that cries out for an answer: Can the UN ever bring about a nuclear-weapons-free world as foreseen in dozens of resolutions and international conferences?

Dr M.V. Ramana, Professor and Simons Chair in Disarmament, Global and Human Security and Director, Liu Institute for Global Issues at the School of Public Policy and Global Affairs, University of British Columbia, Vancouver, told IDN the United Nations, by itself, can never bring about a nuclear-weapons-free world, regardless of the number of resolutions and conferences.

However, the United Nations can act as a meeting place where countries around the world that are interested in this goal can get to express their collective will, he pointed out.

But such countries by themselves, even as a combined grouping at the UN, might not be able to force powerful countries like the United States or Russia or China to give up their nuclear weapons, he argued.

"It would have to be combined with the power of social movements within these countries. Of course, at this moment, such movements are very weak and the likelihood of them being able to change policies is extremely low."

“But we do not have an option, for a continuation of the current nuclear status quo—or worse, an arms race—will almost definitely end in a catastrophe,” he warned.

Henriette Westhrin, secretary-general of Norwegian People’s Aid said: “The war in Ukraine and Vladimir Putin’s nuclear threats are yet another stark reminders of the profound dangers of living in a world where some states insist their security must rest on the capacity for massive and indiscriminate nuclear violence.”

“We have ended up trusting luck rather than the supposed stabilizing effects of nuclear deterrence. It is deeply concerning that the global stockpile of nuclear weapons available for use is now increasing,” said Westhrin, secretary-general of Norwegian People’s Aid, which published its annual Nuclear Weapons Ban Monitor report on April 11, 2022.

Medea Benjamin, a co-founder of CODEPINK, a women-led grassroots organization working to end U.S. wars and militarism, told IDN this is certainly not the first time the UN has failed to stop a war.

“But the war in Ukraine has actually given people a heightened sense of the danger of nuclear war. This is especially true for the younger generation, as they have not grown up with such a looming possibility as we are experiencing right now. We must build on this.”

According to the UN ban treaty, she said, “nuclear weapons are now illegal, and we have to keep working to get the nuclear States to sign”.

The first task is to end the war in Ukraine, without triggering a nuclear confrontation and without allowing it to drag on for years, the way the US wars in Iraq and Afghanistan did.

“But we can use this time to educate people about the existential threat of nuclear war and build support for the UN treaty.”

Asked whether nuclear disarmament was a good try in a lost cause, Benjamin said: “A lost cause would be a nuclear confrontation between Russia and the United States. It is our obligation to fight for a nuclear-weapons-free world because the future of the planet hangs in the balance”.

Dr Ramesh Thakur, Emeritus Professor, the Australian National University and Senior Research Fellow at the Toda Peace Institute, told IDN: First, there is a common misunderstanding about the UN.

“It was never designed to be able to stop a major power (a P5) from aggression against smaller states: the US and UK against Iraq in 2003 and Russia against Ukraine currently. It gave higher priority to preserving peace by avoiding a full-scale war between the major powers.”

The veto clause ensures both goals, he said.

“This also hints at a crucial factor that the biased Western media is mostly ignoring. In a real sense, the Ukraine war is a proxy Russia-NATO war for which the US and NATO share responsibility.”

The Solomons are 2,000km offshore from Australia's north coast. Russia and the Ukraine share land border and Kyiv is under 800km from Moscow. Yet the US refuses to concede that NATO's continual eastward expansion crossed an understandable Russian red line, he noted.

Second, on the nuclear question, the issue is again slightly less clearcut than your question implies, said Dr Thakur, whose most recent book is The Nuclear Ban Treaty: A Transformational Reframing of the Global Nuclear Order (Routledge, 2022).

He pointed out it's possible to argue three positions. Firstly, the hard return of geopolitics has pushed the cause of nuclear disarmament back quite severely by highlighting the role of nuclear weapons and leading to increased interest from some US allies, both in Europe and in the Pacific, in entering into nuclear-sharing arrangements with NATO and the US.

Secondly, and alternatively, the crisis highlights the critical importance of actually doing something about the threats posed by the very existence of nuclear weapons, instead of forever pushing it into the future because the present time is never the right time to pursue this goal.

Thirdly, in light of the Ukraine crisis, can the world afford to continue with a virtual civil war between the nuclear arms control and disarmament community between the NPT and TPNW camps, instead of pooling efforts towards credible and practical steps to reduce nuclear dangers? asked Dr Thakur.

Meanwhile, according to the latest figures from the Nuclear Weapons Ban Monitor, the nine nuclear-armed states had a combined arsenal of 12,705 nuclear warheads at the beginning of 2022.

Of these, an estimated 9,440 warheads—with a collective yield equivalent to approximately 138,000 Hiroshima bombs—constituted usable stockpiles, available for use by the nuclear-armed states on their missiles, aircraft, submarines and ships.

The number of nuclear warheads in usable stockpiles is now on the rise, warns the Nuclear Weapons Ban Monitor.

In addition to the 9,440 nuclear warheads in global usable stockpiles, at the beginning of 2022 an estimated 3,265 retired, older warheads were awaiting dismantlement in Russia, the United Kingdom, and the United States. [IDN-InDepthNews – 27 April 2022]

Photo: The Sun rises behind Long Island City skyscrapers at the dawn of the first day of the general debate of the General Assembly's seventy-sixth session (2021). UN Photo/Mark Garten