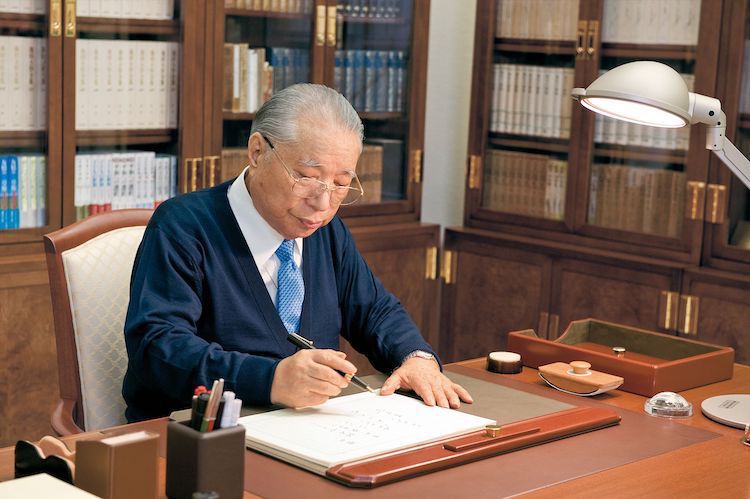 BERLIN | TOKYO (IDN) — Along with the United Nations, the community-based Buddhist organisation Soka Gakkai International (SGI) offers a beacon of hope particularly when the world is plagued by crises threatening the survival of humankind.

Every year since 1983, SGI President Daisaku Ikeda, a Buddhist philosopher, peacebuilder and educator, has issued a peace proposal. His latest—and the 40th—titled "Transforming Human History: The Light of Peace and Dignity"—was released on January 26. [2022-02-21-27] ARABIC | HINDI | JAPANESE TEXT VERSION PDF

SGI comprises 192 countries and territories and is an NGO in consultative status with the United Nations Economic and Social Council (ECOSOC).

Dr Ikeda points out: "Even in the midst of the COVID-19 crisis, the world’s military expenditures have continued to grow. There are more than 13,000 nuclear warheads in current stockpiles, and modernization continues with no end in sight. There is grave concern that we may see a further buildup of the global nuclear arsenal."

The pandemic has also brought to light, he adds, new risks surrounding nuclear weapons by creating situations that could disrupt the chain of command: political leaders of nuclear-weapon states have had to temporarily transfer power to their deputies due to COVID-19 infection. There were also major outbreaks aboard a nuclear-powered aircraft carrier and a guided missile destroyer.

Dr Ikeda warns against "the danger of continuing to embrace an overconfidence that we will be spared the catastrophe of nuclear weapons use". He adds: "It is only thanks to a combination of good luck and certain individuals preventing incidents from escalating disastrously that we have not seen another instance of the use of nuclear weapons since the bombings of Hiroshima and Nagasaki."

In "a fluid international environment, where guardrails have either
been eroded or are completely absent," Dr Ikeda continues, "we can no longer afford to rely solely on such human factors or good luck".

At present, the only remaining bilateral framework for nuclear disarmament is the New Strategic Arms Reduction Treaty (New START), which Russia and the United States agreed to extend in February 2021.

The Conference to the review the Treaty on the Non-Proliferation of Nuclear Weapons (NPT) every five years—NPT Review Conference—previously scheduled for January has been postponed due to the impact of the pandemic. A rescheduled meeting to be held this coming August is now being considered. The last Review Conference, held in 2015, failed to adopt a final document, and this failure must not be repeated, he declares.

Dr Ikeda urges the parties to agree on concrete measures to comply with the pledge in the preamble of the NPT: "to make every effort to avert the danger of such a war".

The NPT is often seen to be based on a central bargain: the NPT non-nuclear-weapon states agree never to acquire nuclear weapons and the NPT nuclear-weapon states in exchange agree to share the benefits of peaceful nuclear technology and to pursue nuclear disarmament aimed at the ultimate elimination of their nuclear arsenals.

Dr Ikeda maintains that the spirit reaffirmed by the joint statement of the five nuclear-weapon states—that "a nuclear war cannot be won and must never be fought"—was first enunciated during the Cold War when US President Ronald Reagan (1911–2004) and Soviet General Secretary Mikhail Gorbachev met in Geneva in November 1985. The importance of the spirit that animated the 1985 Geneva summit was also referenced in the statement issued after the US-Russia summit held in June 2021.

SGI President Ikeda urges the UN Security Council "to create an opportunity to discuss the steps needed to bring the era of nuclear weapons to an end, adopting the outcome of those deliberations in a resolution, thereby initiating a process of fundamental transformation".

To break out the current impasse, marked by the heightened risk that nuclear weapons will be used, Dr Ikeda believes that it is most urgent to find a way of "detoxifying" ourselves from current nuclear-dependent security doctrines.

National security may be a concern of overriding importance to nuclear weapon states. But what meaning can there possibly be in continued dependence on nuclear weapons, he argues, when they are capable of causing such devastating damage to both the opposing country and one’s own, and can irrevocably undermine the very foundations of humanity’s survival?

From this standpoint, he says, there is compelling need for beginning the process of detoxification by redirecting our focus from the actions of other countries to those of our own. In this way, all states can start to fulfill the pledge in the preamble of the NPT and truly "make every effort to avert the danger of such a war".

With an eye on the Summit of the Group of Seven (G7)—comprising Canada, France, Germany, Italy, Japan, the United Kingdom, and the United States—that will take place in Japan in 2023, President Ikeda proposes concurrently a high-level meeting in Hiroshima on reducing the role of nuclear weapons, with the participation of the leaders of non-G7 countries.

Hiroshima and Nagasaki are the two cities over which the U.S. dropped two atomic bombs on August 6 and 9, 1945, respectively.

SGI President Ikeda notes that this past January 21, Japan and the United States issued a joint statement on the NPT. In it, the two governments declare: "The atomic bombings of Hiroshima and Nagasaki, forever ingrained in the world’s memory, serve as stark reminders that the 76-year record of non-use of nuclear weapons must be maintained."

Significantly, they also call on political leaders, youth and others to visit Hiroshima and Nagasaki to increase awareness of the horrors of nuclear weapons use.

He recalls that on January 3, the leaders of the five nuclear-weapon states issued a statement on preventing nuclear war and avoiding arms races. He calls on the UN Security Council to use this joint statement as the basis for a resolution urging the five nuclear-weapon states—the United States, Russia, the United Kingdom, China, and France, the five permanent members of the UN Security Council often known as the P5—to take concrete measures to fulfil their obligations to nuclear disarmament stipulated by Article VI of the NPT.

The SGI President's second proposal relates to the Treaty on the Prohibition of Nuclear Weapons (TPNW): he strongly urges the participation of both Japan and other nuclear-dependent states and the nuclear-weapon states as observers in the first meeting of states parties to the TPNW when it is held.

He also suggests that a commitment be made at this meeting to create a permanent secretariat to ensure fulfilment of the obligations and international cooperation stipulated in the TPNW.

The crucial stage has now been reached in efforts to abolish nuclear weapons, and completing this task is how we can fulfil our responsibility to the future. "Firm in this belief," Dr Ikeda pledges, "the SGI will continue to advance, growing the solidarity of civil society with a special focus on youth, toward the creation of a culture of peace where all can enjoy the right to live in authentic security". [IDN-InDepthNews – 21 February 2022]