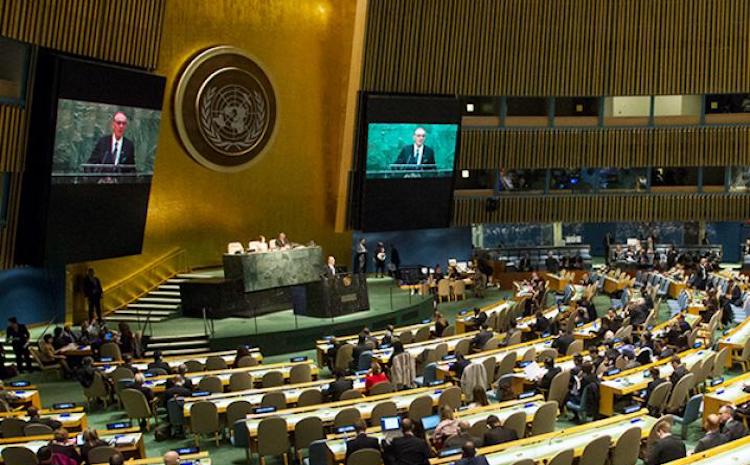 Photo: The UN General Assembly Hall will have to wait until August 2022 or beyond to host the delayed 2020 NPT Review Conference. Credit Sophia Paris/UN.

NEW YORK (IDN)— The United Nations, which has been brought to a virtual standstill because of an upsurge in coronavirus infections in New York City, has been forced to postpone a long-awaited 10th review conference (REVCON) of the Nuclear Non-Proliferation Treaty (NPT), scheduled to take place 4-28 January.

Diane Barnes, NGO Liaison Office at the UN Office for Disarmament Affairs (UNODA), was explicit: "There will be no Review Conference in January 2022, in any format". [2022-01-01-23] HINDI | JAPANESE TEXT VERSION PDF | RUSSIAN

This is the third postponement of the REVCON, the last two in January 2021 and August 2021. The UN went into a lockdown mode in March 2020.

The review conference on the NPT Treaty is held every five years.

In a letter to delegates, Gustavo Zlauvinen, President-designate of REVCON, said: "I realize that it is deeply disappointing for States Parties not to be able to carry out the important work of the Review Conference, but the present circumstances do not leave us any choice".

One delegate jokingly said: "In the battle between the spreading pandemic and nuclear weapons, it’s the pandemic that keeps winning," a virus which has claimed over 5.4 million lives worldwide since December 2019.

On 27 December, the Chef de Cabinet wrote to the President-designate of REVCON to advise him that, considering the latest developments regarding the COVID-19 pandemic, the Secretariat will not be able to service an in-person meeting of the tenth NPT Review Conference in January 2022.

The primary reason is the UN staffers numbering over 9,900 are working mostly from home. The temporary "return to office" (RTO) was suspended last month and the "flexible arrangement" of working from home will continue through 9 January—and until further notice.

Following the Secretariat’s advice regarding the availability of facilities and services at UNHQ in 2022, the President-designate asked for a tentative hold to be placed on the dates of 1 to 26 August 2022 for the Review Conference. Those dates are subject to formal confirmation by States Parties later.

Asked if there were any expectations of a breakthrough in the postponed four-week long conference, Joseph Gerson, President of the Campaign for Peace, Disarmament and Common Security, and Vice-President of the International Peace Bureau, told IDN expectations for the outcome of the NPT Review Conference have been extremely low, and this postponement does nothing to raise the hopes of nuclear weapons abolitionists and arms controllers around the world.

"The refusal by the nuclear weapons states to fulfil their Article VI obligations, their failure to fulfil the agreements of the 1995, 2000 and 2010 Review Conferences, the reality of their increasingly dangerous arms races, and the confrontations over Taiwan, Ukraine and Kashmir which could trigger a catastrophic nuclear war by accident or miscalculation," he added.

Here in the United States, said Gerson, it appears that among the reasons that the Biden Administration will not adopt a "No First Use" doctrine in its Nuclear Posture Review, is the fear that China would interpret such a doctrinal change as an invitation to repossess Taiwan.

That, plus the continued commitment to spending nearly two trillion dollars to upgrade the U.S. nuclear arsenal are reasons for profound concern and for popular actions to insist on changes in U.S. policies, he pointed out.

Short of a breakthrough when the Review Conference is finally held, Gerson argued, it is possible that language addressing the need to fulfil the obligation to make progress toward the creation of a Middle East Nuclear Weapons and WMD Free-Zone can be found to avoid what is termed a "failure" of the RevCon.

And, hardly a breakthrough, something approximating credible commitments to take meaningful steps toward the fulfilment of previous RevCon agreements is to be hoped for.

In a statement on 20 December, the Comprehensive Nuclear-Test-Ban Treaty Organization (CTBTO) said "set against a backdrop of a global pandemic, uncertainty surrounding the Iran nuclear talks, and countries upgrading or increasing their nuclear weapons stockpiles, there might not seem to be much room for consensus on the many contentious issues that will be discussed".

One area on which many States agree is the Comprehensive Nuclear-Test-Ban Treaty (CTBT) and the monitoring system the CTBTO has built to detect nuclear explosions anywhere by anyone. This state-of-the-art system is unique in the world and is critical for achieving universal, non-discriminatory, and verifiable nuclear disarmament, the statement said.

Asked about the areas of contention which may elude consensus in the upcoming REVCON in 2022, Gerson said the greatest area of contention will ikely be over language that requires nuclear powers to take credible steps toward fulfilment of their Article VI nuclear weapons obligations.

"There is every reason to believe that the nuclear powers remain committed to preserving the nuclear apartheid disorder. This is unlikely to change until we find a means to mobilize international understanding of the urgency of the continuing nuclear dangers, and forceful popular actions to change governmental policies," Gerson declared.

U.S. embrace of language requiring progress toward the creation of a Middle East Nuclear and WMD-Free Zone will be difficult to achieve, he warned.

President Biden and the Democratic Party are increasingly on the defensive in the face of the undemocratic U.S. electoral college system, right-wing campaigns to disenfranchise voters of colour, and the seizing of control of state and local election offices, Gerson added.

"In this circumstance, the Biden Administration will be unlikely to risk offending voters who are uncritical of Israeli policies," he noted.

Meanwhile, in its statement, the CTBTO said the CTBT bans all nuclear explosions everywhere, by everyone, and for all time. Adherence to the Treaty is nearly universal—185 States have signed and 170 have ratified—but it has not yet entered into force. To do so, it must be ratified by all 44 States listed in the Treaty’s Annex 2, of which eight are still missing.

The CTBTO has established an International Monitoring System (IMS) to ensure that no nuclear explosion goes undetected. Currently, 302 certified facilities—of a total of 337 when complete—are operating around the world, using four main technologies: seismic, hydroacoustic, infrasound and radionuclide.

The data registered by the IMS can also be used for disaster mitigation such as earthquake monitoring, tsunami warning, and tracking radioactivity from nuclear accidents, as well as research into fields as diverse as whale migration, climate change or the prediction of monsoon rains. [IDN-InDepthNews – 01 January 2022]

Photo: The UN General Assembly Hall will have to wait until August 2022 or beyond to host the delayed 2020 NPT Review Conference. Credit Sophia Paris/UN.