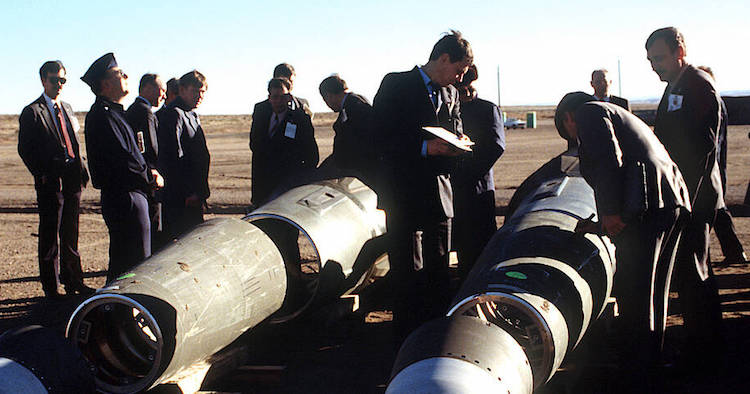 Next year, over 190 States Parties will gather in New York for the 2020 Review Conference of the Treaty on the Non-Proliferation of Nuclear Weapons (NPT) and mark 50 years of this cornerstone of nuclear disarmament. According to experts, there are significant challenges to be overcome if this conference is to be successful – in spite of unceasingly deteriorating international security climate which does not bode well.

“Withdrawing from this landmark treaty is short-sighted and will ultimately undermine the security of the United States and its allies," warned physicist David Wright, co-director of the Global Security Program at the Union of Concerned Scientists (UCS), in the run-up to August 2, the day of U.S. withdrawal from Intermediate-Range Nuclear Forces (INF) Treaty taking effect.

Signed by President Ronald Reagan and Soviet leader Mikhail Gorbachev in 1987, the treaty prohibits short- and medium-range ground-launched missiles carrying nuclear or conventional warheads, and the launchers of such missiles.

Dumping the INF Treaty, Wright cautioned further, "will increase tensions between the United States and Russia and open the door to a competition in conventionally armed missiles that will undermine stability".

He drew attention to the fact that the landmark Treaty, which President Donald Trump ill-advisedly decided to scrap, resulted in the elimination of 2,692 U.S. and Soviet nuclear and conventional ground-launched ballistic and cruise missiles with ranges between 500 and 5,500 kilometers.

Experts concede that there appears to be evidence of Russia having violated the Treaty by testing a new ground-launched cruise missile. But Russian complaints about U.S. missile defence systems in Poland and Romania “also have merit”, they say.

These systems are intended to launch interceptor missiles but appear to be capable of launching cruise missiles as well – and deploying the launchers violates the treaty. The U.S. has apparently not been willing to discuss this issue with Russia in an effort to resolve the concerns of both nations and preserve the treaty. To claim that the U.S. is justified in pulling out of the treaty because of Russian violations does not, therefore, take the full picture into account, experts argue.

According to Kingston Reif, director for disarmament policy at the Arms Control Association (ACA), the fact is that in February, the Trump administration "recklessly announced" its intent to withdraw the United States from the INF Treaty without a viable diplomatic, economic, or military strategy to prevent Russia from deploying additional and new types of prohibited missiles in the absence of the treaty. "Rushing to build our own INF-range missiles in the absence of such a strategy and without a place to put them doesn't make sense,” Reif stressed.

ACA experts said, the U.S. Defense Department has requested nearly $100 million in fiscal year 2020 to develop three new missile systems that would exceed the range limits of the INF Treaty. The Democratic-led House of Representatives has expressed concern about the rationale for the missiles. The House versions of the fiscal year 2020 National Defense Authorization Act and defense appropriations bill zeroed out the Pentagon’s funding request for the missiles.

“Without the INF treaty, there needs to be a more serious U.S. and NATO arms control plan to avoid a new Euromissile race," says Daryl Kimball, executive director of the Arms Control Association. NATO, he adds, could declare as a bloc that no alliance members will field any INF Treaty-prohibited missiles or any equivalent new nuclear capabilities in Europe so long as Russia does not deploy treaty-prohibited systems where they could hit NATO territory.

UCS’s Wright says, what apparently underlies Trump's decision is the administration’s aversion to negotiated agreements that in any way constrain U.S. weapons systems. "But what we’ve gotten from this treaty is the destruction of 1,846 Soviet missiles, in exchange for 846 U.S. missiles, and an agreement that has prevented a buildup of these missiles for more than three decades. Working to resolve the issues around the treaty is a better move for U.S. security than ending it."

Walking out of the INF Treaty leaves New START (Strategic Arms Reduction Treaty) as the only bilateral nuclear arms agreement between the U.S and Russia. If President Trump pulls out of that treaty as well or allows it to lapse, it will be the first time since 1972 that the two countries will be operating without any mutual constraints on their nuclear forces, cautions Wright.

"Without the INF Treaty, as well as the soon expiring New START (Strategic Arms Reduction Treaty), there would be no legally binding, verifiable limits on the world’s two largest nuclear arsenals for the first time in nearly half a century," warns Thomas Countryman, former assistant secretary of state for international security and nonproliferation and chair of the Arms Control Association's board of directors.

Swiss disarmament expert Oliver Thränert points out that the New START agreement on the limitation of deployed strategic nuclear weapons expires on February 5, 2021. The parties could agree to an extension for up to five years.

"But this would be like putting a band-aid on the gaping bullet wound that is rapidly growing nuclear proliferation. To apply a really effective bandage, we would need a completely new concept for nuclear arms control," adds Thränert who heads the think tank at the Center for Security Studies (CSS) at ETH Zurich.

There are two key reasons as to why a new concept for nuclear arms control is necessary, explains the Swiss expert.

First, nuclear arms control must be multilateral rather than just bilateral in the future. The reason: Unlike during the Cold War, Europe no longer plays a central role in today’s global conflicts. Asia’s importance has increased exponentially. And this also applies to nuclear arms. Although China, India, and Pakistan are still some way behind the U.S. and Russia when it comes to the size of their nuclear arsenal, they are steadily catching up and can therefore no longer be ignored.

"In this sense, the Trump administration’s deliberations about the inclusion of China (at the very least) in future treaties are certainly not misguided. From Washington’s perspective, such a step is, in fact, almost mandatory, since Beijing has superseded Moscow as the big challenge of the 21st century," opines Thränert.

Second, he argues, future arms control will no longer be able to focus solely on nuclear weapons. Other technologies are increasingly influencing strategic stability. These include missile defence; long-range, conventional precision weapons; antisubmarine defence; systems to detect and track mobile intercontinental ballistic missiles. The whole gamut of cyber-related challenges and the role of space is also growing in importance. [IDN-InDepthNews – 31 July 2019]