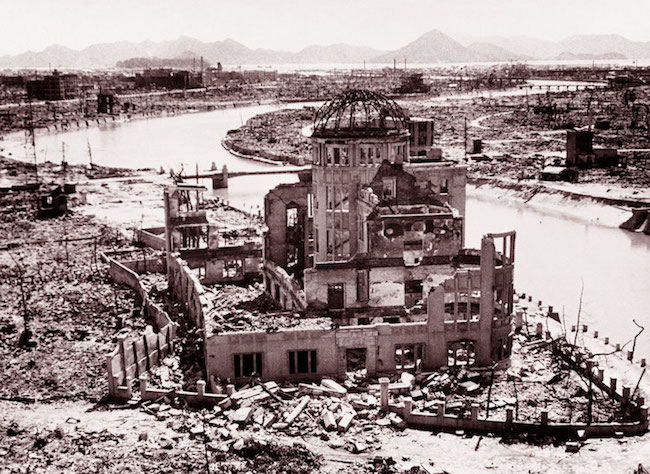 KANDY, Sri Lanka (IDN) – On July 7 2017, seventy two years after the most inhumanely destructive weapon was invented and used on hapless Hiroshima and Nagasaki, a Conference of the majority of member states in the United Nations decided – by a vote of 122 for; one abstention: and one against – to adopt a Treaty for the Prohibition of Nuclear Weapons.

It had been a long journey from January 1946 when the newly established United Nations Organization, located temporarily in London, adopted its very first resolution calling for nuclear disarmament signifying the undisputed priority of this issue. Since then, at every session of the UN General Assembly, resolutions with various nuances on nuclear disarmament were adopted with varying majorities. [P 12]  SPANISH | JAPANESE TEXT VERSON PDF｜

Meanwhile the number of nuclear weapon armed countries grew to nine – of which only five were recognized as nuclear weapon states in terms of the 1968 Treaty for the Non-proliferation of Nuclear Weapons. Many other states huddled under their nuclear umbrellas the main one being the North Atlantic Treaty Organization (NATO). For these states and the concept of deterrence and extended deterrence there is the specific prohibition contained in the new Treaty to host nuclear weapons belonging to some other country. For the NPT as a whole, belying the fears of the opponents, the norm of non-proliferation has been greatly strengthened in the new Treaty.

Three clearly discernible strands merged in the final thrust of the nuclear disarmament movement to achieve the adoption of the July 7 Treaty text. They were: (a) the process over seven decades in the UN itself led by a dedicated group of countries; (b) the work of civil society; and (c) the “Humanitarian initiative” which has made an indelible stamp on the disarmament field and influenced the Preambular paragraphs of the July 7 treaty especially.

Historic landmarks at the UN included the 1978 first Special Session of the UN General Assembly devoted to Disarmament (SSODI) the Final Document of which remains the high watermark of the international consensus reached on disarmament clearly identifying as a priority the goal of the elimination of nuclear weapons.

A group of parallel treaties both global and regional upheld this objective. These include the most widely subscribed to disarmament treaty - the 1968 Treaty for the Non-proliferation of Nuclear Weapons (NPT) which under Article VI provides, ineffectively, for negotiations “in good faith” for nuclear disarmament and the Comprehensive Nuclear Test Ban Treaty (CTBT) which remains unratified by eight nations before it can enter into force.

On the international legal front, the 1996 Advisory Opinion of the International Court of Justice was a major success in calling for the declaration of the illegality of the possession and use of nuclear weapons but the feasibility of its implementation was questioned. A series of distinguished international commissions such as the Canberra Commission also called for the elimination of nuclear weapons in their cogently argued reports with significant impact on global public opinion.

Broadly speaking the debate between the Nuclear Weapon States (NWS) and their allies on the one hand, and the Non Nuclear Weapons States (NNWS) on the other, was around the wisdom of achieving the seemingly common objective of a nuclear weapon free world through a “step by step” process of achieving security before disarmament or by agreeing on an outright nuclear weapon ban followed by it gradual implementation under credible international verification procedures.

The latter school of thought supported politically by the Non-aligned Movement (NAM) countries in the UN and the Non-Governmental Organizations (NGOs) and civil society faced rising levels of frustration by the obstructionism of the NWS and their supporters. The precedent established by the outright ban on the two other categories of weapons of mass destruction – Biological Weapons through the Biological Weapons Convention (BWC) of 1972 and Chemical Weapons by the Chemicals Weapons Convention (CWC) of 1993 – as legal norms was relevant.

Article VI of the NPT had long been the banner under which NNWS had fought its battle for nuclear disarmament. After the indefinite extension of the NPT in 1995 that appeared an increasingly frustrating avenue when agreements reached by consensus at the NPT Review Conferences in 1995, 2000 and 2010 were brazenly violated by the NWS. Nuclear weapon proliferation by India and Pakistan, who stayed out of the NPT, seemed to be rewarded by their NWS friends while the Democratic People’s Republic of Korea (DPRK) remains under increasingly tough sanctions in a tense stand off with the NWS in the UN Security Council.

In that context, Austria and Switzerland, supported by the ICRC with its impeccable humanitarian credentials, initiated the “Humanitarian Initiative” from within the NPT with growing support in the UN behind a series of resolutions highlighting the catastrophic humanitarian consequences of the use of nuclear weapons. This grew into a broad campaign with conferences in Oslo (March 2013), Nayarit (February 2014) and Vienna (December 2014) the logical conclusion of which led to the 2016 resolution at the UNGA calling for the decisive 2017 Conference.

In the buildup of frustration over failed and unimplemented NPT Review Conferences and decisions, civil society grew more strident and bold in its demands. Initiatives adopted by NGOs like the International Campaign to Ban Landmines (ICBL) and the move to abolish Cluster Munitions led to treaties outside the UN framework at first before they were brought within the UN confirming their legitimacy and enlarging their circle of adherents.

On nuclear weapons where the stakes were higher and the opposition of the NWS more formidable the International Campaign for the Abolition of Nuclear Weapons (ICAN) led a coalition of NGOs energetically succeeding first with the adoption of the UNGA resolution in 2016 and then the 2017 Conference.

The holding of the conference was met with opposition and a boycott from the NWS and their allies including Australia and, surprisingly, Canada. Only the Netherlands from NATO participated in the Conference – if only to vote against the final resolution adopting the text of the Treaty

The election of Ambassador Elayne Whyte-Gomez – the able woman diplomat from Costa Rica – as President was significant. Her country – one of the very few without a standing army and with former President Oscar Arias as a Nobel Laureate – had laudable credentials quite apart from her own diplomatic skills.

The conclusion of the Conference coincided with the G20 meeting in Hamburg with its stormy protests and the media focus on the first Trump-Putin meeting and the dissonance of Trump’s policies with the rest of the G20 especially on climate change. International media attention, which, at the best of times, is niggardly when it comes to the question of nuclear disarmament, was even more so in reporting on the July 7 climax of the conference.

In favour of the Treaty

The sparse commentary was largely skeptical with regards to the implementability of the Treaty, which comes before the UNGA for adoption in September. Several factors operate in favour of the future of the Treaty.

First it has set a modest target of 50 ratifying states for entry into force rather than the 44 specifically named states in the CTBT including the USA. Second a history of comparable treaties shows that the lapse of time between the first surge of signatories and the totally inclusive nature of the Treaty may be long but the validity of the treaty as international law is undisputed.

In the particular case of the NPT when the UN General Assembly adopted Resolution 2373 in 1968, endorsing the draft text of the Nuclear Nonproliferation Treaty (NPT), the vote was 95 to 4 with 21 abstentions. The 122 countries that voted for the adoption of the Treaty for the Prohibition of Nuclear Weapons are thus pioneers on a bold and exciting path combining security concerns with humanitarian interests.

We are at a transformational moment. Violence and conflict triggered by extremist ideologies and an arms race among great powers has resulted in a total of $1676 billion of military expenditure in 2016. Nine nuclear weapon armed states with a total arsenal of 15,395 warheads, 4120 of them operationally deployed, threaten the catastrophe of nuclear war declared intentionally or by accidents like computer error or hacking. Nuclear weapon arsenals are being modernized all the time with reckless nuclear doctrines increasing the danger of actual use.

Populism – a counterfeit brand of democracy – is being enthroned in the West and other parts of the world while increasing economic disparities and growing intolerance of minorities is spreading, triggered by the largest wave of human migration of refugees and displaced people since World War II. In contrast the Treaty for the Prohibition of Nuclear Weapons is a ray of hope for our troubled times.

*Jayantha Dhanapala is a former UN Under-Secretary-General for Disarmament Affairs 1998-2003 and a former Ambassador of Sri Lanka to the USA 1995-97 and to the UN in Geneva 1984-87. He is currently the President of the Pugwash Conferences on Science & World Affairs. The views expressed are his own. [IDN-InDepthNews – 12 July 2017]