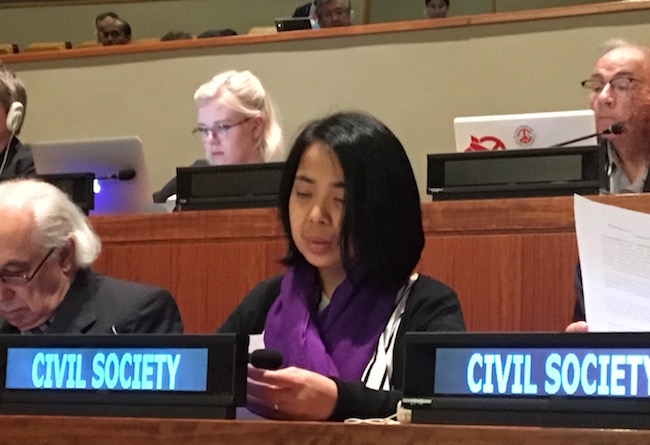 NEW YORK (IDN) – Faith communities have called for heeding the voices of the world's Hibakusha (atomic bomb survivors) and stressed the need for the five-day United Nations Conference at the UN headquarters in New York to negotiate "a legally binding instrument to prohibit nuclear weapons, leading towards their total elimination".

A statement on March 28, second day of the conference, endorsed by more than 20 organizations and individuals, pleaded for developing "a treaty text that clearly and explicitly" prohibits the use, possession, development, production, acquisition, transfer and deployment of nuclear weapons, as well as any inducement, encouragement, investment or assistance with those prohibited acts. "The new instrument should also provide for an obligation for the complete elimination of nuclear weapons, and a framework to achieve it." [P Extra]  JAPANESE

The statement explained that "the fundamental justification for this new legal instrument is the prevention of the humanitarian harm caused by any use of nuclear weapons".

"The clear justification" for this new legal instrument is to ensure that suffering experienced by people in Hiroshima and Nagasaki "is never visited on any other individual, family or society". The humanitarian impact of nuclear weapons remains at the core of all nuclear disarmament efforts, the statement declared.

Faith communities further stressed the need of continuing to call upon all states to participate in the UN negotiations "in order to fulfil their obligation to pursue in good faith and bring to a conclusion negotiations leading to nuclear disarmament".

While 120 countries are participating in the conference, President Donald Trump's UN envoy, Nikki Haley, held on March 27 a protest together with two of the five permanent (P5) veto-wielding members of the Security Council – the UK and France – and a number of Eastern European allies who feel threatened by Russia.

A statement titled 'Faith Communities Concerned about Nuclear Weapons' said: "Since the first attack with atomic weapons, in August 1945, when the cities of Hiroshima and Nagasaki were bombed, the terrible consequences of nuclear weapons have demanded their abolition. Since 1945 humankind has been forced to live in the shadow of apocalyptic destruction. Any use of nuclear weapons would not only destroy the past fruits of human civilization, it would disfigure the present and consign future generations to a grim fate."

"Our respective faith traditions advocate for the right of people to live in security and dignity. We believe in the commands of conscience and justice; we seek to honour our duty to protect the vulnerable and to exercise the stewardship that will safeguard the planet for future generations," the statement said.

Faith communities are convinced that nuclear weapons manifest a total disregard for all these values and commitments. There is no countervailing imperative – whether of national security, stability in international power relations, or the difficulty of overcoming political inertia – that justifies their continued existence, much less their use. Their catastrophic humanitarian consequences demand that nuclear weapons never be used again, under any circumstances.

Faith communities are raising their voices in the name of sanity and the shared values of humanity. They welcome the negotiations, necessary to prohibit the worst weapon ever invented. They reject the immorality of holding whole populations hostage, threatened with a cruel and miserable death. They applaud the world’s political leaders that have demonstrated the courage to begin these negotiations. And, they urge those not present to re-examine their positions and, at the very least, make a commitment to join the second session of the conference from June 15 to July 7, 2017.  [IDN-InDepthNews – 29 March 2017]

Photo: Jasmin Nario-Galace of Pax Christi Philippines reading out public statement on behalf of the faith communities on March 28 at the United Nations Conference in New York to negotiate "a legally binding instrument to prohibit nuclear weapons, leading towards their total elimination". Credit: Soka Gakkai.