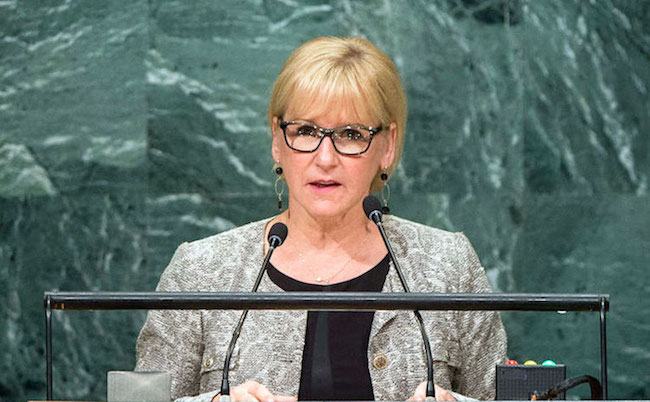 REYKJAVIK (IDN) – When asked what Sweden thought the Trump Administration should do by way of contributing to nuclear disarmament, the Swedish ambassador in Iceland, Bosse Hedberg, replied: “At this point in time, I am not aware of any common Nordic position being prepared in response to the new U.S. administration’s view on this issue. As one can gather from the media, the new president seems rather inclined to invest more in U.S. nuclear capacities than in scrapping part of U.S. weapons.”

Sweden was the only Nordic country to attend the UNOG Conference on Disarmament held March 21-22 in Geneva, although Finland and Norway are also members. [P41]  JAPANESE TEXT VERSON PDF |  KOREAN TEXT VERSON PDF

On March 27, historic negotiations will begin at the United Nations in New York on a treaty to prohibit nuclear weapons, with the ultimate goal of eliminating them. These are the result of previous meetings of the UN General Assembly First Committee (Disarmament and International Security), including one on October 27, 2016, at which a number of texts relating to nuclear disarmament were approved.

Of the Nordic countries, only neutral Sweden voted Yes to resolution L.41, the key text calling for the ultimate elimination of nuclear weapons globally.

Speaking at the Geneva disarmament conference, Sweden’s Foreign Affairs Minister Margot Wallström, pointed out that a new review cycle of the Treaty on the Non-Proliferation of Nuclear Weapons (NPT) starts in May.

“No doubt, this treaty is the cornerstone for nuclear disarmament and non-proliferation. But it has not lived up to its full potential. There are serious flaws in the implementation of nuclear disarmament commitments, and the responsibility falls heavily on the nuclear powers. They cannot continue to ignore the promise to disarm their nuclear arsenals. Russia and the United States must take the lead in restarting the reduction of nuclear weapons," she said.

“There are also many other important measures the nuclear weapon states could commit to in connection with the NPT Review Conference. Measures such as legally binding negative security guarantees, a ban on nuclear-armed cruise missiles, negotiations on tactical nuclear weapons. And maybe more important, risk reduction including de-alerting," the Swedish Foreign Affairs Minister added.

According to Pia Nordberg, a counsellor with the Unit for Arms Control, Disarmament and Non-Proliferation at the Finnish Ministry of Foreign Affairs, “… the Nordic countries discuss regularly about arms control and disarmament questions, including nuclear disarmament. We have been delivering common statements, for example in the UN First Committee. We share the same goal of a world free of nuclear weapons. For Finland, the Nuclear Non-Proliferation Treaty (NPT) is a cornerstone in international security and nuclear disarmament.”

Nordberg says that Finland also wants to underline the role of the nuclear weapon states in promoting concrete nuclear disarmament, adding: “The New START Treaty between the Russian Federation and the United States is a good example of this. We urge both countries to continue implementing this and to go even further and seek for further reductions."

“When it comes to the United States, it is important that our good and constructive dialogue and practical cooperation continues. We need to respect and implement the existing arms control and disarmament framework and agreements, and to build confidence for further cooperation. No one wants a new arms race. Ensuring the viability of the NPT is of utmost importance. Even small steps in nuclear disarmament increase security globally,” Nordberg adds.

Norway has not yet addressed the issue. “To my knowledge there have not been any discussions in the Norwegian Parliament on the Trump Administration's nuclear policies, probably because it is still early days in terms of what they will be,” says Bård Ludvig Thorheim, political adviser to Børge Brende, Minister of Foreign Affairs.

The situation in Denmark is similar. “I’m not aware of the Danish Parliament having discussed the Trump administration’s contribution to nuclear disarmament. … the Defence Committee had summoned the foreign minister and the defence minister to discuss the Trump administration’s views on torture and water boarding but nuclear disarmament was not discussed,” says Jesper Thinghuus, Secretary of the Defence Committee.

Iceland had a change of government in January 2017, not long before Donald Trump was inaugurated as U.S. president. “The issue hasn’t been discussed,” according to Foreign Affairs official Urdar Gunnarsdottir.

Left-Green MP Steinunn Thora Arnadottir, who is also on the foreign affairs parliamentary committee, has been trying to bring up the subject since January in a question to Foreign Affairs Minister Gudlaugur Thor Thordarson on whether Iceland would take part in UN negotiations about banning nuclear weapons. “I know that NATO countries want to boycott these negotiations,” she says. “But the Minister is never available,” she adds in a despairing tone.

Uffe Ellemann-Jensen is a former Foreign Affairs Minister from Denmark and is still active and vocal in public affairs. Speaking "strictly on a personal level", he says: “I’m worried because Trump has made the nuclear deterrence conditional – and it is only valid when it is unconditional. At the same time he has suggested that some non-nuclear countries should develop their own nuclear deterrence. The best he [Trump] could do is to try his best to eliminate any doubt that the security guarantee the United States has been giving Europe through NATO is totally unconditional – and that the treaties on limitations in nuclear weapons should be defended.”

In a Reuters interview in February, Trump was quoted as saying: “I am the first one that would like to see ... nobody have nukes, but we’re never going to fall behind any country even if it’s a friendly country … It would be wonderful, a dream would be that no country would have nukes, but if countries are going to have nukes, we’re going to be at the top of the pack."

However, Icelander Magnus Sveinn Helgason, adjunct lecturer in economic history and American politics at the University of Bifrost, believes that the budget is unlikely to be approved. “There’s a difference between what he says and what he does. It’s not Trump who makes the decisions, it’s Congress,” he says.

Secretary of State Rex Tillerson and Defence Minister James Mattis could both be involved in decisions regarding nuclear disarmament. Tillerson mentioned the importance of nuclear non-proliferation when interrogated by Senators on his nomination hearing and Mattis told the Senate Armed Services Committee: “The nuclear stockpile must be tended to and fundamental questions must be asked and answered.”

But Helgason does not agree, saying “Tillerson is probably the weakest Secretary of State in modern American history. I would not pay much attention to either him or Mattis. Study Steve Bannon [Trump’s chief political strategist] instead – he’s the brains behind Trump.” [IDN-InDepthNews – 23 March 2017]