Relationship Between the CTBTO and OPANAL 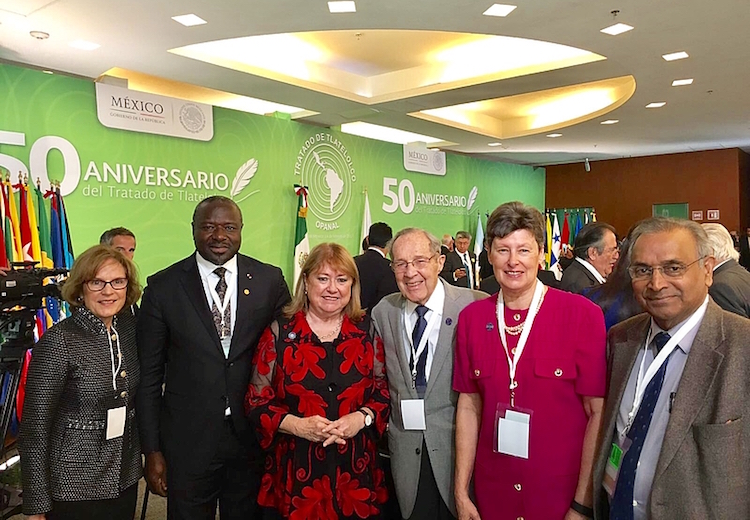 Lassina Zerbo is the Executive Secretary of Preparatory Commission for the Vienna-based Comprehensive Nuclear-Test-Ban Treaty Organization (CTBTO). Following are excerpts from his statement at the XXV Session of the General Conference of the Agency for the Prohibition of Nuclear Weapons in Latin America and the Caribbean (OPANAL) in Mexico City on 14 February 2017.

VIENNA (IDN) - Mexico’s historical role in advancing non-proliferation and disarmament is well recognized, not least through the work of Nobel peace prize laureate Alfonso García Robles in the creation and adoption of the Treaty of Tlatelolco.

Let me also highlight the excellent relationship between the CTBTO and OPANAL in the context of the agreement that both entities concluded in 2002.

In fact, several elements bring together the Comprehensive Nuclear-Test-Ban Treaty and the Treaty of Tlatelolco. Both instruments are verification-based, and both make an invaluable contribution to nuclear non-proliferation and disarmament – and thus to regional and global peace and security.

The Treaty of Tlatelolco was the first instrument to establish a nuclear-weapon-free zone in a densely populated area. It was also the first to require a full-scope safeguards agreement – a year before a similar provision was incorporated into the Treaty on the Non-Proliferation of Nuclear Weapons. Of course, it was also the first to prohibit the testing of nuclear weapons in a specific, inhabited region.

Today, all 33 States in Latin America and the Caribbean are party to the Treaty of Tlatelolco. This is an unprecedented achievement.

After decades of diplomatic effort and technical advancements, States around the world – regardless of their nuclear status – were given the opportunity to join a treaty banning all nuclear explosions, by anyone, anywhere, for all time.

In the case of States that had already positioned themselves against nuclear-weapons testing – like those party to the Treaty of Tlatelolco –, not only were they able to renew their commitment towards the discontinuance of nuclear tests, but they were also given a state-of-the-art monitoring system that would make their commitment verifiable.

The most expansive monitoring system ever designed

Designed to detect any nuclear explosion conducted on Earth, whether underground, underwater or in the atmosphere, the CTBT verification regime comprises 337 monitoring facilities around the world. It represents the most expansive monitoring system ever designed and adds significant value to the Treaty of Tlatelolco.

This value, in fact, goes even beyond verification of State’s undertaking not to test. Member States have identified a wide range of civil, scientific and industrial applications of CTBT data in areas such as disaster risk reduction and environmental monitoring.

Whether it is to detect earthquakes and provide real time warnings of tsunamis, track severe storm systems or radiation dispersal from nuclear accidents, or advance the study of meteorology, climate change and ocean life, CTBT data potentially offers a unique and invaluable contribution to the development of human well-being.

Thirty-one States in Latin America and the Caribbean have access to these benefits by having signed on to the CTBT. I do hope that the remaining two will soon be in a position to join our 183 Signatory and 166 ratifying States, and consolidate the region’s resolve against nuclear test explosions.

Latin American and Caribbean countries have always been at the forefront of discussions on how to advance toward a nuclear-weapon-free world . . . (and) have spearheaded a number of praiseworthy initiatives and been attentive to diverse yet equally commendable opinions. The final objective . . . remains . . . the inception of a safer and more secure world.

CTBT high on the multilateral agenda

In doing so, you have recognized that the CTBT is an essential component of this quest. Whether in Vienna, New York or Geneva, you have kept the CTBT high on the multilateral agenda. You have joined me in calling upon the eight remaining Annex 2 States to ratify the Treaty without delay. You have celebrated each additional signature and ratification as a meaningful step toward universality. And you have condemned those actions that undermine the de facto norm against nuclear testing.

You have also volunteered your collaboration through a number of other channels. The now well-established Group of Eminent Persons counts several distinguished members from this region among its ranks – many of whom are present in this audience. Their value has been incalculable in identifying and pursuing opportunities to promote the Treaty at a high level.

Another valuable channel has been based on the central role that the academic community, civil society and youth can play in raising awareness about the CTBT. In this context, I congratulate the CTBTO Youth Group on its first anniversary. Made up of almost 150 young people across the globe, many from the remaining Annex 2 States, these students and young professionals actively advocate for the Treaty and its benefits, often through self-starting initiatives.

A meeting of the Group was held on February 13 on the margins of the International Seminar, which I hope will encourage talented and motivated young people from this region to join ranks in support of the Treaty.

The support that you give us stems from facts – not fiction: a near-universal treaty with a clear mandate and sound objectives; a verification system fully capable of fulfilling its purpose; an integrated capacity-building and training structure that helps you to make full use of CTBT data.

As we move beyond our own 20th anniversary, I call upon those represented here to renew your commitment to the entry into force and universality of the CTBT, as well as to the build-up of its verification regime. This is the time to demonstrate the same resolve that has turned the Treaty of Tlatelolco into a model of accomplishment and progress through successful multilateralism.

In our efforts to build a better and safer future for the next generations, I am confident that those who succeeded in making their region nuclear-weapon-free will continue to exercise their leadership by building on a very tangible reality: that of a treaty whose entry into force should be the next step towards achieving a world free from nuclear weapons. [IDN-InDepthNews – 20 February 2017]