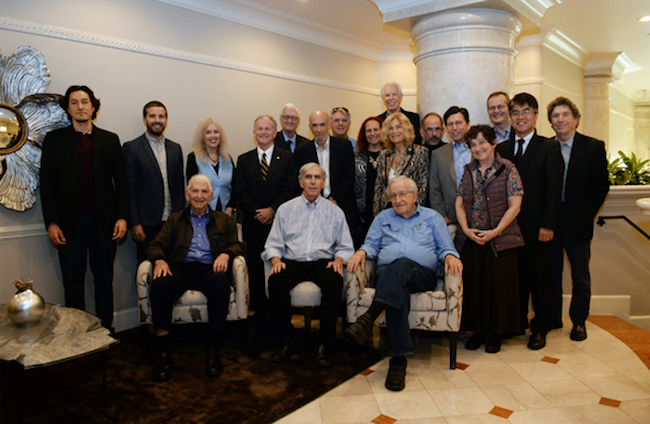 SANTA BARBARA, CA, USA (IDN) - October 24-25, 2016, the Nuclear Age Peace Foundation brought together a small group of academics, activists and thought leaders to discuss how to shift the global discourse toward nuclear disarmament. The symposium, entitled “The Fierce Urgency of Nuclear Zero: Changing the Discourse,” discussed the current state of nuclear threats, geopolitical and psychological obstacles to nuclear zero, and the path forward.

The symposium’s final statement was delayed in order to incorporate the new political realities following the election of Donald Trump as President of the United States, which took place just two weeks after the symposium. [P36] JAPANESE TEXT VERSON PDF

Catastrophic nuclear threats abound. The most destructive threat comes from the United States and Russia, which together possess 93% of the world’s 14,900 nuclear weapons. The use of these arsenals would undoubtedly result in a nuclear winter, putting the future of human civilization into serious jeopardy. A nuclear exchange between other nuclear powers – India and Pakistan, for example – would very likely result in significant global cooling, leading to widespread famine and the deaths of two billion people worldwide.

The symposium’s final statement points out numerous highly volatile situations, including the multi-sided conflict in Syria, the U.S. military’s pivot to the Pacific, NATO’s war games, U.S. missile defense in Eastern Europe, and continued tensions with North Korea. Since the publication of the statement on January 21, 2017, the urgency of nuclear zero has become even clearer.

After Iran tested a medium-range ballistic missile in late January, President Trump announced on twitter that “Iran has been formally PUT ON NOTICE.” Meanwhile, the U.S. Air Force (USAF) has scheduled a test of its Minuteman III Intercontinental Ballistic Missile for February 7. The U.S. deploys around 400 nuclear-armed Minuteman III missiles in silos scattered across five states.

Following U.S. intercontinental ballistic missile tests, USAF officials regularly boast of “the messages we send to our allies who seek protection from aggression and to adversaries who threaten peace.” The double standard of this week’s launch not be lost on the rest of the world.

The Clock Is Ticking

On January 26, the Bulletin of the Atomic Scientists moved its Doomsday Clock to two-and-a-half minutes to midnight – the closest it has been since the 1950s. Despite this, and the many terrifying situations described above, there are positive efforts that require public support in order to bring us back from the brink.

Senator Ed Markey of Massachusetts and Representative Ted Lieu of California have introduced legislation in the U.S. Congress to restrict the President’s power to unilaterally order the first use of nuclear weapons. The bills are insufficient because, even if they are adopted, the U.S. could still use nuclear weapons first if Congress declared war against an adversary.

The fact that President Trump behaves erratically and is prone to irrational retribution, however, makes it clear that the legislation is necessary. Nuclear weapons have always been incompatible with democracy. From Truman to Trump, every U.S. President has held this vast, unaccountable power to himself.

On March 15, the U.S. Ninth Circuit Court of Appeals will hear oral arguments in the lawsuit filed by the Republic of the Marshall Islands (RMI) against the United States. The RMI is seeking U.S. compliance with Article VI of the nuclear Non-Proliferation Treaty, which states:

Specifically, the Marshall Islands believes that the U.S. must “call for and pursue the negotiations that have never begun – namely negotiations in good faith relating to cessation of the nuclear arms race and nuclear disarmament.” While the lawsuit against the United States was originally filed in 2014 against the Obama administration, the process continues in U.S. court, now against the Trump administration.

Then, on March 27, historic negotiations will begin at the United Nations on a treaty prohibiting nuclear weapons. This effort, supported by 113 nations at the United Nations General Assembly in December 2016, will likely lead to a treaty prohibiting “a range of activities relating to nuclear weapons, including their use, development, production, acquisition, stockpiling, retention and transfer, as well as assistance, encouragement or inducement of anyone to engage in any of these prohibited activities.”

On December 22, 2016, then-President-elect Donald Trump tweeted, “The United States must greatly strengthen and expand its nuclear capability until such time as the world comes to its senses regarding nukes.” In reality, the majority of the world’s countries have indeed come to their senses about the urgent need to achieve nuclear zero. Meanwhile, the world’s nine nuclear-armed nations and their enablers continue to threaten us all.

As the final statement of the NAPF symposium said: “There exists an ethical imperative to work for the elimination of nuclear weapons. The survival of the human species and other forms of complex life requires acting upon this imperative.”