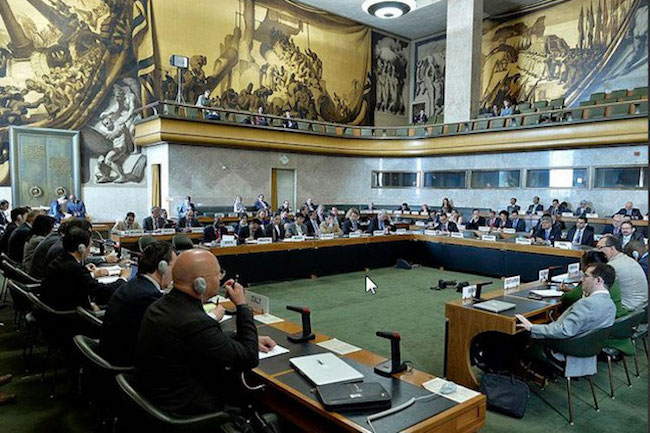 GENEVA (IDN) - Within less than four weeks of taking office, United Nations Secretary-General António Guterres has pledged to "actively pursue the abolition of all weapons of mass destruction and the strict regulation of conventional weapons", arguing that disarmament can play an important role in ending existing conflicts and preventing the outbreak of new.

“I am committed to achieving a world free of nuclear weapons,” Guterres declared in a video message to the Geneva-based Conference on Disarmament, which opened the first segment of its three-part 2017 session on January 23.

Recalling that upon taking office he had described a world of new and old conflicts woven in a complex, interconnected web, Guterres said today that those conflicts have precipitated gross violations of international humanitarian and human rights law.

As such, while disarmament can play an important role in ending existing conflicts and preventing the outbreak of new strife, disarmament and arms control processes provide the breathing space for confidence to be built, stability to be strengthened and trust to be established.

“This was true during the Cold War and it is true now,” continued the UN chief, adding: "The need for a breathing space is urgent. Global tensions are rising, sabres have been rattled and dangerous words spoken about the use of nuclear weapons."

As the sole multilateral disarmament negotiating body, “the world looks to the Conference to provide rationality and diplomatic solutions, to promote security through peaceful action, and to create the instruments we need to develop confidence, trust and international stability,” Guterres told the 65-member panel, adding: “You have a responsibility to all States and all peoples. Now is the time to live up to it.”

“I encourage you to work hard to find compromise and to make the most of your partners in civil society and academia. The United Nations will be your ally and assist however we can,” he concluded.

The Conference on Disarmament, established in 1979 as the single multilateral disarmament negotiating forum of the international community, is not formally a UN body but reports annually, or more frequently as appropriate, to the UN General Assembly.

Michael Møller, the Director-General of the UN Office at Geneva, serves as Secretary-General of the Conference, as well as Guterres’ personal representative to the body.

Currently, the consensus-based body focuses primarily on the following issues: cessation of the nuclear arms race and nuclear disarmament; prevention of nuclear war, including all related matters; prevention of an arms race in outer space; effective international arrangements to assure non-nuclear-weapon States against the use or threat of use of nuclear weapons; new types of weapons of mass destruction and new systems of such weapons including radiological weapons; comprehensive programme of disarmament and transparency in armaments. [IDN-InDepthNews – 26 January 2017]