Youth Campaign for a Nuke-Free World at Nagasaki Conference 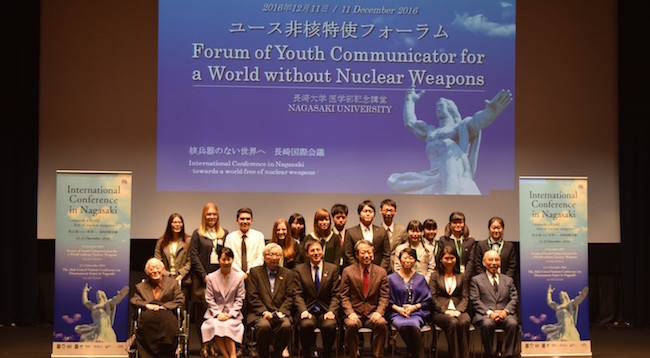 NAGASAKI (IDN) – A Forum of Youth Communicators, launched by Japanese Foreign Minister Fumio Kishida in 2013, has urged people around the world to realize that nuclear weapons do not only absorb huge amounts of money but also pose a serious threat to international peace and security, global environment, and the very survival of humankind.

The Youth Communicators met in the Japanese city of Nagasaki, which suffered atomic bombings along with Hiroshima seventy-one years ago. They pledged to communicate the pressing need to move toward a nuclear-weapons-free world, and proposed a series of steps to achieve the objective. [P31] ARABIC (PDF) | BAHASA |  GERMAN | ITALIAN |   JAPANESE TEXT VERSION PDF | KOREAN TEXT VERSION PDF | MALAY | PERSIAN (PDF) | SWEDISH | THAI |URDU

"We are convinced that human beings cannot peacefully coexist with nuclear weapons as they threaten people, cities and the environment. 'Hibakusha', who managed to survive the atomic bombs dropped on Hiroshima and Nagasaki but suffered physically through aftereffects of radiation and mentally through discrimination, should serve as a warning for the whole world of the dangers of possessing nuclear weapons," the Youth Communicators said in a statement.

The statement added: "Japan, as the sole nation attacked by nuclear bombs, should reject the 'nuclear umbrella', send a strong message to the international community about the horrifying effects and inhumanity of nuclear weapons, and contribute proactively to the negotiation of a legally binding treaty to prohibit nuclear weapons."

The meeting took place during an international conference that included two events: a Forum of Youth Communicators for a World without Nuclear Weapons on December 11 and the 26th United Nations Conference on Disarmament Issues from December 12 to 14.

"We recognize that nuclear weapon issues are at a crossroad. This year, G7 Foreign Ministers met in Hiroshima, and President Obama of the United States visited Hiroshima Peace Memorial Park, where he delivered a historical speech. Next year, the negotiation of a legally binding treaty to prohibit nuclear weapons will start, following the adoption of a resolution at the United Nations General Assembly," the statement added.

Japanese Foreign Minister Kishida launched the Forum with the aim of passing on the realities of atomic bombings to future generations at a time when A-Bomb survivors (Hibakushas) are aging. Since its launch, 174 young people have served as Youth Communicators. In March 2016, Japan held the 1st Youth forum in Hiroshima where Youth Communicators shared their experiences and exchanged their ideas.

The UN Conference on Disarmament Issues (UNCDI) has been held almost every year since 1989 in various cities in Japan, with government officials and experts from around the world discussing ways towards a world free of nuclear weapons. UNCDI is co-organized by the United Nations Regional Centre for Peace and Disarmament in Asia and the Pacific (UNRCPD) and the Government of Japan.

At the 25th UNCDI, held in Hiroshima in August 2015, participants focussed on stocktaking of the 2015 NPT Review Conference, humanitarian consequences of nuclear weapons, Nuclear-Weapons-Free-Zones, and the role of civil society. The conference contributed to revitalizing a global momentum for realizing a world free of nuclear weapons.

"The issue of nuclear ban treaty was taken up at every break out sessions showing the difficulties of dealing this issue in the international society. This conference provided us with a good opportunity to prepare for a NPT preparatory committee to be held next year," Kazutoshi Aikawa, Director General for Disarmament, Non-Proliferation and Science Department, Ministry of Foreign Affairs of Japan, said summing up the Nagasaki international conference.

Earlier, in opening remarks, Kim Won-soo, UN High Representative for Disarmament Affairs said: "This year . . . marks the seventieth anniversary of the first ever General Assembly resolution. As you know, it called for the elimination of all weapons of mass destruction, including nuclear weapons – the weapon to pose an existential danger to humanity. Seventy years later we have yet to achieve that goal. Worse, our efforts to eliminate nuclear weapons have faltered."

The Youth Forum urged all states to "fully reaffirm" their commitments to nuclear nonproliferation and disarmament, in particular promises specified in the Nuclear Non-Proliferation Treaty (NPT), and "strengthen the international legal framework to accelerate nuclear disarmament, including improving enforcement of the NPT and negotiating a legally-binding treaty to prohibit nuclear weapons".

All states in possession of nuclear weapons, the statement said, should "reconsider the necessity to possess nuclear weapons from security, political, and economic perspectives, and to find other means of maintaining national security and international prestige", and take "concrete actions to decrease the number of their nuclear weapons, thereby fulfilling their responsibilities under the NPT".

The statement also urged nuclear states not party to the NPT to join the treaty, and at least one state with nuclear weapons to set an example by disbanding its nuclear program and by joining the efforts of a nuclear free world.

"Stop upgrading nuclear arsenals, as they will not stabilize global security environment," said the statement, adding: "Take all warheads off hair trigger alert status, as it poses unnecessary risk and danger to the existence of the world, and will prevent an accidental launch."

Nuclear weapon state should "further secure nuclear arsenals to decrease nuclear mishaps by dispatching experienced personnel to monitor them and maintain weapon-usable materials out of reach of those who wish to obtain them, such as terrorists", the statement added.

States without nuclear weapons, including states under “nuclear umbrella” should continue their commitment to remain a non-nuclear weapon state, and take a leadership role in achieving a world free from nuclear weapons.

States under the “nuclear umbrella” in particular should reject their policy, especially in light of risks, effectiveness and credibility, and make efforts to build a security scheme that does not rely on nuclear weapons, including establishing a nuclear weapon free zone.

Commenting the deliberations of the Communicators Forum, Hiroyasu Tagawa (83) who lost his parents by an atom bombing in Nagasaki, said: “The time during which I can convey my experience as Hibakusha is increasingly limited. I was touched to encounter thoughts of youth today. I have a high expectation on their activities.”

The average age of the surviving atomic bomb victims is now over 80. With that in view, Nagasaki Mayor Tomihisa Taue said it was important to find new ways to promote the anti-nuclear message without relying on survivors of the bombings.

The Hibakusha have launched a global appeal for a nuclear ban treaty arguing: “So that the people of future generations will not have to experience hell on earth, we want to realize a world free of nuclear weapons while we are still alive.” They have launched a signature campaign calling for an international treaty to ban and eliminate nuclear weapons, in the hope that no one will ever have to suffer as they have.

They plan to continue to collect signatures until a nuclear ban treaty is concluded. The first batch of 564,240 signatures collected in August and September 2016 was submitted to the chair of the United Nations General Assembly’s disarmament committee. (Visit: https://www.change.org/p/join-the-hibakusha-appeal-for-a-nuclear-ban-treaty) [IDN-InDepthNews – 24 December 2016]