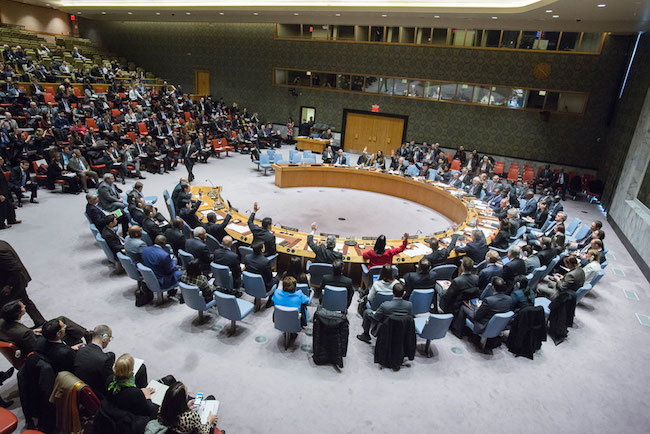 NEW YORK (IDN-INPS) - Expressing concern over the threat of terrorism and the risk that non-State actors may acquire or use nuclear, biological or chemical weapons, the United Nations Security Council has called on all countries to establish national controls to prevent proliferation of such weapons as well as their means of delivery, according to UN News.

In a resolution adopted on December 15, 2016 the 15-member Council also reiterated the need to continue to strengthen ongoing cooperation among various intergovernmental bodies and entities concerning terrorist groups such as Al-Qaida, the Islamic State of Iraq and the Levant (ISIL/Da’esh), as well as counter-terrorism, through enhanced information sharing, coordination and technical assistance.

The Council further called on all UN Member States to ensure the full implementation of its resolution 1540 (2004) on non-proliferation of weapons of mass destruction.

It also called for strengthening the UN Trust Fund for Global and Regional Disarmament Activities through additional funding so that it is able to better assist countries in implementing their obligations under resolution 1540.

Prior to the adoption of resolution by the Council, Deputy-Secretary-General Jan Eliasson underlined the threats posed by weapons of mass destruction in the wrong hands and called on the international community to “take advantage of every opportunity to strengthen our collective defences […] that are nimble and flexible.”

Stressing the threats of biological, chemical and nuclear weapons as well as of the “growing nexus” between such weapons, terrorism and cyber security, he added: “The nightmare scenario of a hack on a nuclear power plant causing uncontrolled release of ionizing radiation is growing.”

He further underlined the importance strengthening the capacities of all countries to combat such threats and called on them to fulfil their commitment to build a world that is free of all weapons of mass destruction. [IDN-InDepthNews – 16 December 2016]