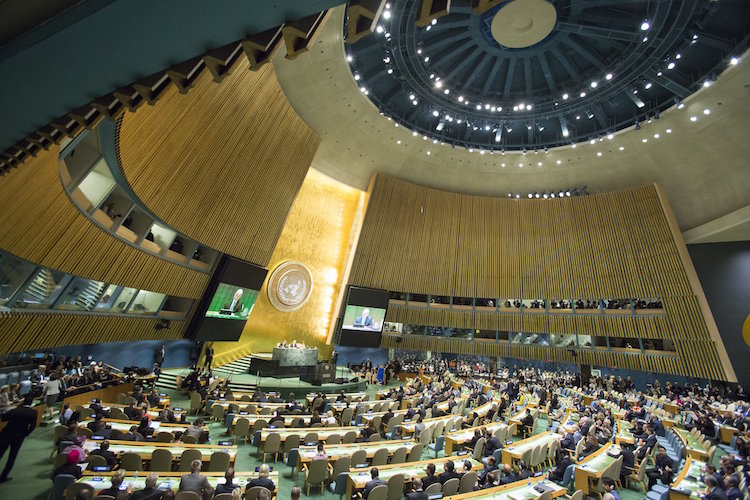 "This was the most acrimonious UN General Assembly I have seen in the nearly 30 years I have been observing the Disarmament and International Security Committee at the UN." - Alyn Ware, PNND Global Coordinator.

The resolution establishes a UN conference in 2017 ‘to negotiate a legally binding instrument to prohibit nuclear weapons, leading towards their total elimination.’

The negotiating conference will be held at the UN in New York from March 27-31 and from June 15 – July 7, 2017. It will be open for the participation of all UN member states as well as international organisations and civil society.

The UN was split on the decision (123 in favour, 38 against, 16 abstaining) with only non-nuclear countries and North Korea supporting. The other nuclear-armed states and those under extended-nuclear-deterrence relationships (NATO countries, Japan, South Korea and Australia) either opposed or abstained on the decision. This reflects their unwillingness to abandon nuclear deterrence and join a comprehensive nuclear prohibition treaty.

It also reflects the increased tensions between nuclear reliant states, especially in North East Asia (North Korea v Japan and South Korea), and between Russia and the West (including over Ukraine and Syria). See, for example, Mikhail Gorbachev warns world is at 'dangerous point' amid US-Russian face off over Syria.

"These tensions spilled over into the deliberations in New York," says Alyn Ware, PNND Global Coordinator. "This was the most acrimonious UN General Assembly I have seen in the nearly 30 years I have been observing the Disarmament and International Security Committee at the UN."

However, the nuclear reliant countries will not be able to block the negotiations, or the adoption of a prohibition treaty. The negotiating conference will be run according to UNGA rules which allow for a vote, rather than CD rules which require consensus. And the majority vote in the UNGA means that there will also be majority support at the negotiating conference for the adoption of a nuclear prohibition agreement, which will apply to those countries that sign and ratify.

The UN also adopted a number of other resolutions including one supporting a Middle East Nuclear Weapon Free Zone (adopted by consensus), one to de-alert all nuclear weapons systems to reduce the risk of nuclear weapons use (174 in favour, four against and four abstentions), and one to hold a UN High Level Conference on Nuclear Disarmament no later than 2018 to advance a nuclear weapons convention, i.e. a global treaty for the prohibition of nuclear weapons that would include the nuclear-reliant countries.

The support for the resolution on the UN High Level Conference  (143 in favour, 28 against, 15 abstaining) includes a number of nuclear reliant states (e.g. China, India, Pakistan and DPRK). The conference - and its preparatory process - will provide opportunities to increase political pressure on the nuclear reliant states to undertake nuclear disarmament measures. However, at the moment it does not have a negotiating mandate nor an agenda.

Parliamentarians and inter-parliamentary bodies have been supporting these four initiatives, as well as the NPT Review Process, which resumes in 2017, meeting for two weeks in Vienna from April 3-14, 2017.

The Inter-Parliamentary Union, whose 170 member parliaments include nearly all of the nuclear-reliant countries, adopted a resolution in 2014 promoting a Middle East NWFZ and negotiations for a nuclear weapons convention or package of agreements.

More recently, in July this year, the Parliamentary Assembly for the Organisation for Security and Cooperation in Europe adopted the Tbilisi Declaration which called for de-alerting nuclear weapons systems and the adoption of no-first-use policies, as well as supporting multilateral nuclear disarmament negotiations in 2017 and the UN High Level Conference in 2018.

Just last week, the European Parliament adopted a resolution calling on nuclear-armed states to reduce all types of nuclear weapons, diminish their role in military doctrines, reduce their operational status and move them away from deployment into storage.  The resolution also welcomes the proposal to convene a UN conference in 2017 to negotiate a legally-binding instrument to prohibit nuclear weapons. See MEPs sound wake-up call on nuclear threats.

Parliamentarians in many countries - including in nuclear reliant states such as Norway, Netherlands and Japan – also promoted the draft UN resolution on negotiations for a prohibition treaty. (See Norway and Japan parliaments – on a ban, the pledge and the role of nukes and Japan legislators’ letter to Foreign Minister Kuchida). They will likely continue to push their governments to participate in the negotiations even though their governments did not support the resolution.