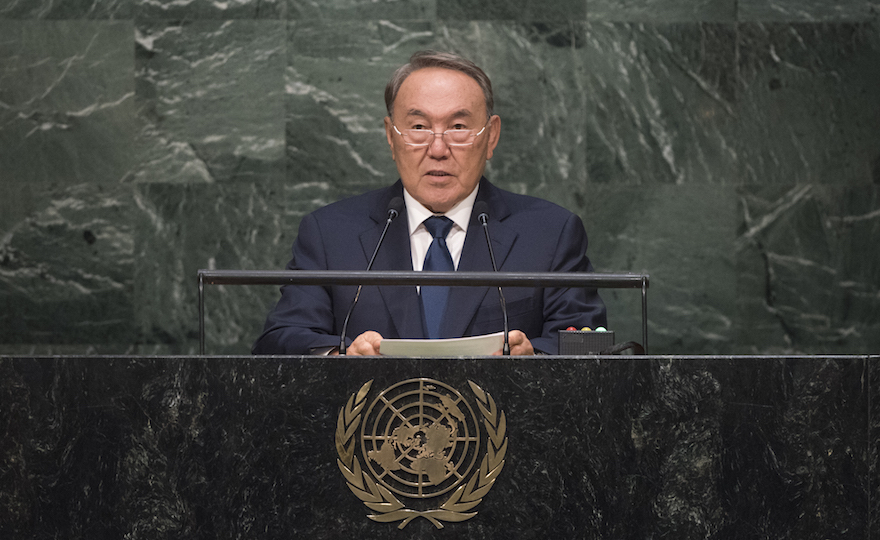 NEW YORK (IDN) – "At a time when the international community is seeing a renewal of big-power rivalry and debating the pros and cons of nuclear technology, the initiative of Kazakhstan President Nursultan Nazarbayev in establishing the Nazarbayev Prize for a Nuclear-Weapons-Free World and Global Security is both prescient and timely," says Ong Keng Yong, Ambassador-at-Large at the Singapore Ministry of Foreign Affairs.

He is referring to the decision to award the Nazarbayev Prize for a Nuclear-Weapons-Free World and Global Security to King Abdullah II of Jordan who has worked tirelessly to secure peace and stability in the Middle East where efforts to declare the region free of weapons of mass destruction including nuclear weapons failed in 2015.

Ong Keng Yong rightly points out that the care and concern King Abdullah II has shown for the innocent civilians displaced by armed conflicts deserves international recognition, and this is what the award conferred on him does.

Paying tribute to Kazakhstan's commitment, he says in an opinion piece for the Astana Times: "It will be an excellent contribution to global peace and stability. The nations of the world must continue to engage in meaningful dialogue, strengthen lasting cooperation and work for the well being of all peoples."

As widely known, Kazakhstan has long been a champion of nuclear disarmament and world peace. During the 70th session of the UN General Assembly in 2015-16, President Nazarbayev repeatedly pointed to the need for ushering in a nuclear-weapons free world.

A feather was added to President Nazarbayev's cap, when he received a letter from Deputy of the State Duma of the Federal Assembly of VI convocation of the Russian Federation, Member of the Defence Committee Maxim Shingarkin, in which he noted Kazakhstan’s leadership in the field of nuclear disarmament and non-proliferation concerns and the important issue of denuclearisation of Europe.

The letter, made public by the Akorda press service, notes the increased scale of the nuclear threat, including terrorism in today’s troubled world and the danger of a conflict with nuclear weapons.

“Kazakhstan, thanks to your (Nazarbayev's) efforts is a recognised leader in the field of combating challenges of the time and in the global movement for a nuclear weapons-free world," notes the letter, adding that in 1991, the Central Asian state showed exceptional vision and leadership by closing the Semipalatinsk nuclear test site.

Then in 1994, the last nuclear warheads were removed. "Citizens of the state headed by you, showed courage and determination and defied the world, which is being concerted by nuclear phantoms, and were able to give their children and future generations in the country a life free of the nuclear threat,” said Shingarkin.

He added that such steps, which provided a non-nuclear-weapon status to the country, had shown "not only the ability for non-dangerous nuclear weapons technology in a single advanced and confidently developing country to be beneficial, but also hope for a peaceful nuclear weapons-free future for all mankind".

The establishment of the Central Asian zone free of nuclear weapons is an historical merit of Nursultan Nazarbayev, having the key to ensuring global stability, Shingarkin added.

These words of commendation need to be viewed against the backdrop that the decision to close the test site and remove all nuclear weapons reflected a strong political will, the courage to translate it into reality, and put a series of follow-up measures in place which, as Foreign Minister Erlan Idrissov says, give Kazakhstan "the moral right to push for nuclear disarmament and non-proliferation, both globally and regionally".

Besides, it was at the initiative of the Republic of Kazakhstan, together with a large number of sponsors and co-sponsors that the 64th session of the United Nations General Assembly (UNGA) on December 2, 2009 unanimously adopted a resolution 64/35 declaring August 29 the International Day against Nuclear Tests.

Closing the testing site and ridding Kazakhstan of nuclear weapons, working "meticulously" with the Soviet Union was only a first step. Both soft- and hardware were involved in ensuring the safe disposal of the weapons and materials.

The persistent need to prevent nuclear material from falling into the hands of terrorists called for unprecedented – and at the time secret – cooperation between Kazakhstan, Russia and the United States, as well as other countries and organizations, over several years.

Kazakhstan's foreign policy, emphasizing peace, dialogue and international cooperation has been guided by the recognition of the "immorality" of nuclear weapons, "the vision of security", and "ensuring a healthy environment", according to Idrissov.

It is with this in view that the Central Asian republic has been in the forefront of the global campaign to end nuclear testing and to warn against the dangers of nuclear weapons.

"We have also shown that international influence and stature do not depend on nuclear firepower," Idrissov adds. Kazakhstan's election as non-permanent member of the UN Security Council for 2017-2018 – and good relations with a wide range of countries – is evidence of the country's standing in the world, he says.

"We would bring our perspective to contribute to the work of the Security Council and the UN for the cause of peace and development," he told IDN in a briefing during an international conference in the Kazakh capital Astana in August. The focus will be on ensuring global nuclear, water, food and energy security.

Kazakhstan will serve on the Council beginning January 1, 2017 as one of the 10 non-permanent members along with Sweden, Bolivia and Ethiopia. The newly-elected countries will replace Spain, Malaysia, New Zealand, Angola and Venezuela.

Together with Japan's Foreign Minister Fumio Kishida, Idrissov chaired the Ministerial-level Conference on September 29, 2015 in New York for Facilitating the Entry into force of the Comprehensive Nuclear-Test-Ban Treaty (CTBT), which was adopted by the UNGA in 1996.

Kazakh President Nazarbayev and Prime Miniser Shinzo Abe of Japan reiterated in a statement issued on October 27, 2015 in Astana the reasons behind their commitment to the Comprehensive Nuclear-Test-Ban Treaty (CTBT) becoming a law.

Altogether 183 member states of the UN have signed the Treaty and 164 have ratified. But it will enter into force only when 44 countries complete their ratification procedures. Particular attention is being paid to eight countries – China, Egypt, Iran, Israel and the U.S., which have signed the Treaty, and North Korea, India and Pakistan that have until now refused to put their signature on the CTBT.

Kazakhstan's global status is also underlined by the country's choice to host the international low enriched uranium bank under the auspices of the International Atomic Energy Agency (IAEA), which will start operating next year. The 'bank' will ensure supply of uranium for civilian purposes such as building nuclear power plants.

Of equally great importance is the Universal Declaration for the Achievement of a Nuclear-Weapons-Free World tabled by Kazakhstan and co-sponsored by 35 countries. President Nazarbayev initiated the proposal at the first Nuclear Security Summit in Washington, D.C. in April 2010. He reiterated it on September 28, 2015 at the general debate of the 70th session of the UNGA in New York.

The Kazakh Ministry of Foreign Affairs worked hard from 2010 to 2015 with all interested parties to agree on the text of the Declaration, which was finalised at the session of the UNGA First Committee held in October and November 2015.

Third: the redirection of the investment of human and economic resources that now go toward the development, maintenance and modernisation of nuclear weapons into strengthening sustainable development, peace and security, as well as saving millions of people from poverty.

The world has also seen a reduction in the global threat to human lives from nuclear weapons. But there are still 15,000 in existence – enough to destroy humanity many times over. Still, there has been progress.

"We have seen the growth of nuclear weapons-free zones as we now have in Central Asia. The number of weapons, too, has been reduced." But the threat from nuclear weapons has scarcely ever been as great, because violent extremist groups are actively trying to get their hands on nuclear weapons and technology. If they succeed, they would not hesitate to use them. In their view, the greater the loss of life and destruction the better.

With this in view, President Nazarbayev has called for the mankind to set, as its main goal for this century, ridding our world of nuclear weapons by 2045, the centenary of the United Nations. With his Manifesto: The World. The 21st century, he has produced a blueprint to show how this goal could be achieved.

The last 25 years have shown this won’t be easy. But, as Idrissov rightly points out, "we must step up our efforts to rebuild the trust needed". The example of Kazakhstan shows both the price to be paid in case of failure and also what can be achieved with vision.

This is underlined by the Declaration adopted by conference on 'Building a Nuclear-Free World' 'The Astana Vision: From a Radioactive Haze to a Nuclear-Weapon Free World'. The Declaration recalls that closure of the Semipalatinsk nuclear test site was "the first such step in the world history of disarmament". [IDN-InDepthNews – 28 October 2016]