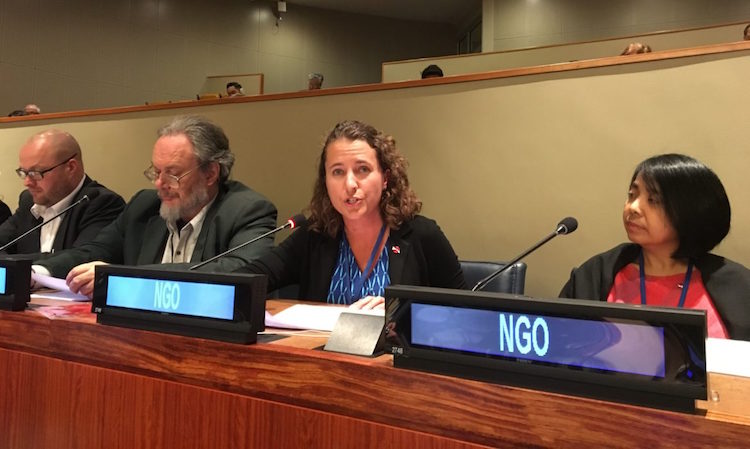 NEW YORK (IDN) – Faith groups have called on the United Nations General Assembly to heed the voices of the survivors of atomic bombings 71 years ago (hibakusha) urging the abolition of nuclear weapons, and vote in favour of the resolution submitted by Austria, Brazil, Ireland, Mexico, Nigeria and South Africa.

Dr. Emily Welty, Vice Moderator of the World Council of Churches Commission on International Affairs, introduced the joint statement during the civil society presentations at the UN General Assembly First Committee on Disarmament and International Security on October 12.

The statement reads in part: “Nuclear weapons are incompatible with the values upheld by our respective faith traditions which are also foundational elements in the development of international law – the right of people to live in security and dignity; the commands of conscience and justice; the duty to protect the vulnerable and to exercise the stewardship that will safeguard the planet for current and future generations… ”

This is the fifth time the group, calling itself 'Faith Communities Concerned about the Humanitarian Consequences of Nuclear Weapons', has issued such a statement. Representatives of 11 faith-based organizations from the Christian, Buddhist and Islamic traditions have signed the statement.

It draws attention to the fact that Article 26 of the United Nations Charter envisages the "establishment and maintenance of international peace and security with the least diversion for armaments of the world's human and economic resources."

However, in the decades since the adoption of the Charter, the world has diverted immense stores of material, economic, technical and intellectual resources to the production and maintenance of a vast and growing array of armaments.

Far from ensuring peace and security, these preparations for war and violence have locked states into the "security dilemma" of escalating mistrust and fear, says the statement.

What is more, they have inflamed and entrenched conflicts throughout world, bringing unimaginable suffering to vast numbers of people. These armaments have diverted precious resources from human needs, hampered human development and human rights, and undermined the cause of human security. They have not made the world safer.

The joint statement adds: The diversion of resources for armaments is also a diversion of the world's cooperative and normative resources. To its enduring credit, the UN has proven itself as a forum for building new norms and treaties in arms control and disarmament. Recent examples include the Arms Trade Treaty (ATT) and expert groups examining the growing use of unmanned and increasingly autonomous weapons systems.

"Such processes demand sustained international commitment. The difficult infancy of the ATT is making clear the need to improve compliance, capacity and transparency all the way along the chain from where arms are made to where they are put to use, says the statement.

"Multilateral forums on drones and lethal autonomous weapons are essential because new technologies cannot be allowed to outpace ethical responsibility and collective commitment to the rule of law. The Article 26 requirement of conscientious limitations on armaments in the service of peace is as holistic as always and more timely than ever."

Kazuo Ishiwatari, Executive Director of Peace and Global Issues for Soka Gakkai International (SGI), which has been involved in this group from the start, explained: “The challenge of abolishing nuclear weapons is a truly global enterprise. It is our sincere hope that the negotiations for the prohibition of nuclear weapons will begin in 2017, and we will continue to make every effort to contribute to a constructive discussion particularly from a moral and ethical perspective, as Buddhists upholding the value and dignity of life.”

Soka Gakkai International (SGI) is a community-based Buddhist organization with over 12 million members around the world. As an NGO in consultative status with the UN ECOSOC, SGI and its members have been engaged in awareness-raising and advocacy calling for the abolition of nuclear weapons for over 50 years.

Dr. Welty added: “Despite the rich differences in our faith traditions, it is extremely significant that we are united in our clear denouncement of nuclear weapons and our fervent belief that banning nuclear weapons is a prophetic step towards making the world a safer place for all humanity. As people of faith, we must act with courage and a clear moral drive to call on all people of conscience to speak out against the forces of violence that divide us.”

Susi Snyder, Nuclear Disarmament Programme Manager for Pax, stated, “The broad support for the start and conclusion of negotiations on a new legally binding instrument on nuclear weapons is reflected in this statement. This is a once in a lifetime opportunity for all governments to be on the right side of history.” [IDN-InDepthNews – 16 October 2016]