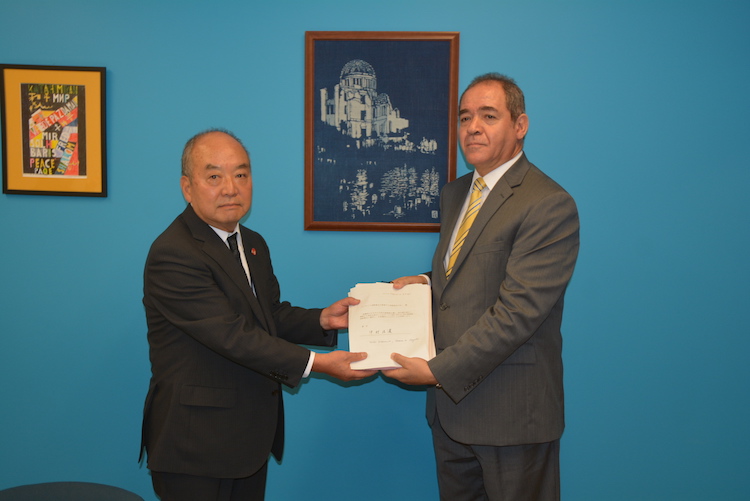 NEW YORK (IDN) - The 'International Hibakusha Appeal Signature Campaign', launched early 2016, aims to collect hundreds of millions of signatures by 2020 in the hope that a treaty to prohibit and eliminate nuclear weapons will be achieved in their lifetime.

As of October 1, 2016, the Campaign had gathered 564,260 signatures in Japan and in several other countries around the world.

The Campaign was initiated on the eve of the 60th anniversary of the founding of the Japan Confederation of A-and H-Bomb Sufferers' Organizations (Nihon Hidankyo).

It is being carried out at the grass-roots level by a broad range of organizations and individuals in the name of the representatives of the survivors of atomic bombings of Hiroshima and Nagasaki 71 years ago.

Toshiki Fujimori, Deputy Secretary-General of Nihon Hidankyo, submitted the signatures in support of the “Appeal of the Hibakusha” to Ambassador Sabri Boukadoum, Chairperson of the First Committee,
71st Session of the United Nations General Assembly, on October 6, 2016.

Fujimori said in Japan, the only A-bombed nation, aging Hibakusha has actively joined the signature collection on the streets despite the heat in August.

"More than 30 civil society organizations, beyond the difference of thought and creed, jointly formed a promotion committee of the signature campaign, which is working to gather supports and solicit endorsements rapidly.  We are greatly encouraged by a growing support from mayors and assembly members of local municipalities across the country," he added.

The two A-bomb attacks on Hiroshima and Nagasaki in August 1945 killed 210,000 people by the end of that year, and are still tormenting the mind and body of the 170,000 surviving Hibakusha, he stressed.

The Nihon Hidankyo Deputy Secretary-General pointed out that since 2012, the joint statements and international conferences on the humanitarian consequences of nuclear weapons had made it clear that a nuclear weapon explosion, whether used intentionally or accidentally, would cause catastrophic damage beyond borders and no nations or international organizations have means to carry out adequate relief operations.

"Thus it is in the interest of humanity for nuclear weapons not to be used, and the only guarantee to prevent the catastrophe is the elimination of nuclear weapons. This conclusion corresponds to the desire of the Hibakusha who have constantly appealed, 'No more Hibakusha'.”

Fujimori explained that the Open-ended Working Group on Nuclear Disarmament set up by the resolution adopted in the 70th UN General Assembly, had held sessions during 2016 and issued recommendations which among others call on, “the General Assembly to convene a conference in 2017 … to negotiate a legally-binding instrument to prohibit nuclear weapons, leading towards their total elimination”.

This falls in line with the spirit of the UN Charter, the first Assembly resolution upholding the elimination of atomic weapons, and the aspiration of the peoples of the world.

Ambassador Boukadoum, on behalf of the members of the First Committee, offered his sincere thanks and the thanks of the international community for continued quest to rid the world of nuclear weapons by the Hibakusha.

He cited the outgoing Secretary-General Ban Ki-moon’s recent quote that the Hibakusha have “transformed their tragedy into a message of hope”. He also recognised their commitment and contribution to the elimination of nuclear weapons.

Ambassador Boukadoum said: “The hundreds of thousands of signatures you have collected are testament to the ability of the Hibakusha to appeal to human morality and social responsibility.” [IDN-InDepthNews – 11 October 2016]