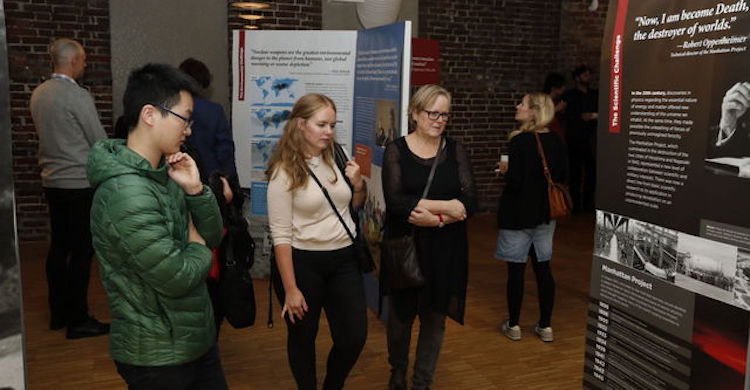 BERGEN (IDN) – Norway is a founding member of the North Atlantic Treaty Organization (NATO), enjoying the Alliance's protection as a nuclear umbrella state and yet widely known for its association with peace issues: not only for hosting the first international Conference on the Humanitarian Impact of Nuclear Weapons in Oslo in March 2013.

SGI joined hands with three Norwegian peace organizations – ICAN Norway, No to Nuclear Weapons (NNW) and the Norwegian Peace Association (NPA) – to arrange an event in Bergen, Norway's second largest city with a population of 260,000.

The event on September 5 consisted of an exhibition titled Everything You Treasure – For a World Free From Nuclear Weapons and a symposium titled, 'Conversation: A way forward to eliminate nuclear weapons – Perspectives of Norwegian and Japanese peace movements'.

The exhibition was first set up in cooperation with the International Campaign to Abolish Nuclear Weapons (ICAN), in August 2012 in Hiroshima, the target of first-ever atomic bombings along with Nagasaki in 1945.

The exhibition has meanwhile been shown in 62 cities in 15 countries – and more cities and countries for display are in planning. Each time the exhibition is shown in a different city, SGI organizes an event similar to that in Bergen, in order to create a platform for dialogue as well as to expand the grassroots network of groups and individuals around the world who want to abolish nuclear weapons.

The goal of the exhibition that looks at the nuclear weapons issue from 12 different perspectives is to create linkages to other people’s areas of interest in order to increase global awareness, said Kimiaki Kawai, SGI’s director of peace and human rights. "All of us should be involved.”

Kawai added: “In our day-to-day life, we don’t see nuclear weapons and it is easy for people to lose interest in the question. So one of the things we emphasize is that if money spent on nuclear weapons is spent on health and other crucial questions, life would be better.”

SGI is a Tokyo-based lay Buddhist organization, which has a strong tradition for peace work and official ties with the United Nations. Along with other groups, including faith-based groups, SGI has been calling for action on disarmament since 1957, when the Declaration Calling for the Abolition of Nuclear Weapons was issued at the height of the Cold War by Josei Toda, then president of Soka Gakkai.

“It’s very important now more than ever that civil society organizations work together on this issue in order to avoid any political deadlock,” Terasaki told IDN.

The Bergen event followed in the footsteps of the UN Open Ended Working group on nuclear disarmament (OEWG) that wrapped up in Geneva on August 19 the third series of sessions, convened since February, by adopting a recommendation to the United Nations General Assembly to initiate negotiations on a legal instrument to prohibit nuclear weapons, leading to their elimination.

“At different points in time during the 71-year period (since the atomic bombings of Hiroshima and Nagasaki) the global movement (against nuclear weapons) has been stagnant while other times saw a more positive outlook,” said Terasaki. “However, we are in the final years of being able to listen directly to the experiences of hibakusha [survivors of the atomic bombings] who are raising their voices to abolish nuclear weapons,“ he added.

In the 'Conversation: A way forward to eliminate nuclear weapons', Frode Ersfjord from 'No to Nuclear Weapons', who spent time in Japan this summer, and visited Hiroshima, stressed the need for grassroots actions as well as political activity. A combination of good organizers and institutional memory is crucial for getting people out on the streets – demonstrations on a particular issue often start off small but attendance swells as time goes on.

Representatives from three Opposition parties – the Socialist Left, Greens and Reds – who joined the Conversation said they all agreed that the campaign to abolish nuclear weapons had to be carried out on a national basis as well as internationally.

In a short interview with IDN, Urban observed that the nuclear threat is very close. “We‘re very interrelated and connected: we can’t harm others without harming ourselves,” she said. This point is also stressed in one of the exhibition panels.

Strand pointed out that “we’re quite good at looking at new conflicts and the changing world situation, but we overlook the old issue of nuclear disarmament because it’s been around for such a long time that we’re used to it. But there are certain things happening now, like between the U.S. and Russia, that should be of concern to us, and also whether terrorist groups could get access to nuclear weapons.”

Fredrik Heldal, director of the Norwegian Peace Association, said: “Instead of concentrating on the political side – the pros and cons of bans, lobbying and such like – we need to make it more into an ethical issue. A discussion on ethics and morals ... will resonate more and it will be easier to sell the issue.” [IDN-InDepthNews – 09 September 2016]

Photo: Visitors to the exhibition Everything You Treasure – For a World Free From Nuclear Weapons. Credit: IDN-INPS.