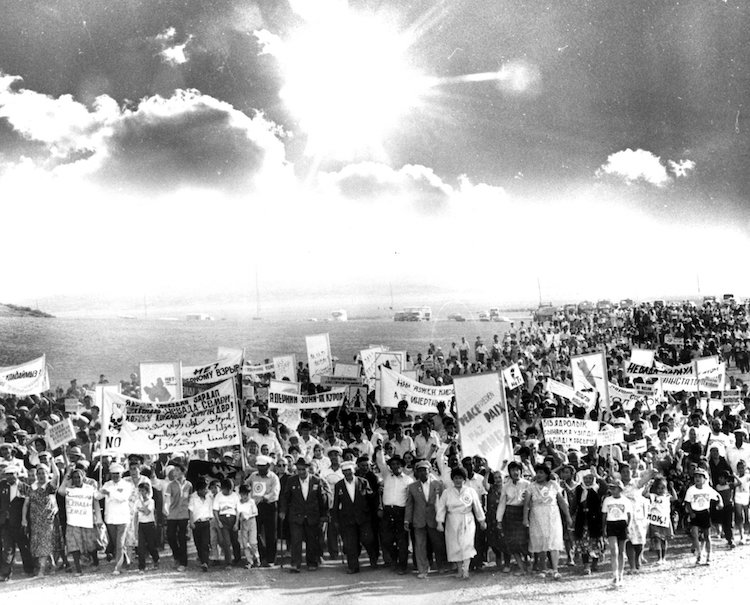 This article appears in cooperation with the Comprehensive Nuclear-Test-Ban Treaty Organization (CTBTO), as part of the initiative ‘Youth for CTBTO’. The views expressed are those of the author and do not necessarily reflect those of the CTBTO. - Editor

WASHINGTON. D.C. (IDN) - Following mass protests against Soviet nuclear weapons testing in Kazakhstan, on August 29, 1991, the Kremlin was forced to close the Semipalatinsk nuclear test site, where over 400 nuclear tests were conducted, and declare a moratorium on nuclear testing. This, in turn, opened the way for the United States to halt testing and for negotiations on a global, verifiable Comprehensive Nuclear-Test-Ban Treaty (CTBT), which were concluded in 1996.

August 29 is now recognized by the United Nations as the International Day against Nuclear Tests to raise awareness about the devastating health and environmental effects of the over 2,000 nuclear tests since 1945, the value of a global ban on all nuclear testing to curb the development of new types of nuclear weapons, and the pursuit of a world free of nuclear weapons.

But the door to the possible resumption of nuclear testing remains open because the CTBT still has not entered into force. Although 183 states have signed and 164 have ratified the treaty, there are still eight key states that need to ratify it to trigger the treaty’s formal entry into force.

The longer the CTBT’s entry into force is delayed, the higher the odds that one or more states will try to conduct a nuclear test explosion, openly or in secret, which would trigger a new round of nuclear testing and arms racing.

At the biannual Article XIV Conference of the Comprehensive Nuclear-Test-Ban Treaty Organization (CTBTO) in 2015 to encourage the early entry into force of the CTBT, Kazakhstan’s Foreign Minister and Co-Chair of the conference Erlan Idrissov declared that “business as usual” would not do. He emphasized that after nearly 20 years of this treaty, creative and “more aggressive” approaches were necessary to stimulate action by key holdout states – China, Egypt, India, Iran, Israel, North Korea, Pakistan, and the United States.

Now, ahead of the September UN Security Council meeting and the 20th anniversary of the opening for signature of the CTBT on September 24, we have that opportunity.

The United States and other UN Security Council member states are considering a resolution designed to reinforce the global norm against nuclear testing and stigmatize those who continue to test, as well as call for continued support for the International Monitoring System, which is designed to detect and deter prohibited nuclear test explosions.

Also under consideration is a statement from the permanent five (P5) members – China, France, Russia, the United Kingdom, and the United States – that would declare that a nuclear test explosion would defeat “the object and purpose” of the CTBT.

Contrary to some reports, neither the resolution nor the statement will impose any new legally binding limitation. All signatories to the CTBT are bound by customary international law not to take actions that would defeat the purpose of the treaty, which is clearly to bar nuclear test explosions.

Nevertheless, this high-level reaffirmation of national commitments in support of the CTBT and the global norm against nuclear testing is an important insurance policy against renewed nuclear testing pending the formal entry into force of the CTBT.

By reaffirming the value of the CTBT and support for the de facto global nuclear test moratorium, the resolution can also provide a strong impetus for the eight holdout states to ratify and accelerate entry into force.

In the Middle East, for example, ratification of the CTBT by Egypt, Israel, and Iran would build confidence in a troubled region and contribute to the realization of the elusive goal of a Middle East zone free of nuclear and other weapons of mass destruction.

India and Pakistan, each of which have declared unilateral national nuclear testing moratoria, should also welcome the resolution and actively consider joining the international nuclear nonproliferation mainstream by signing the CTBT.

Russia, which has signed and ratified the treaty, should welcome the resolution and a P5 joint statement against nuclear testing as a reaffirmation of their position and a lever on moving the United States and China to finally ratify the treaty.

Finally, the resolution, without naming North Korea’s specifically, would reinforce the international community’s push for Pyongyang to end to nuclear testing, which could allow it to perfect smaller nuclear warheads that could be delivered on ballistic missiles.

The resolution will also help bolster support for the maintenance and operation of the CTBTO's global network of more than 300 monitoring stations, which verifies compliance with the treaty.

Today, the International Monitoring System is over 90% complete. The CTBT has successfully carried out two on-site inspection exercises to demonstrate one of the most invasive verification measures allowed by the CTBT, which will only be available when the treaty enters into force.

However, there is still much more to be done to improve the test monitoring system. For example, Iran has yet to begin sending its data from its International monitoring stations to CTBTO's International Data Centre. This action would be a key confidence-building step towards its eventual ratification of the treaty. Pakistan and India could begin building their monitoring stations so they can begin to provide data useful to detect and deter nuclear tests.

The UN Security Council resolution could also guard against the possibility of erosion of support for the CTBTO, which would adversely affect the maintenance and effective operation of the IMS and IDC. Dr. Lassina Zerbo, executive secretary of the CTBTO, has stated numerous times that he fears states will suffer from “treaty fatigue".

“My issue is the risk that the longer the entry into force of the CTBT is, the more risk we have with regard to treaty fatigue that could lead to people saying, ‘Why are we investing in something if we don’t know when the treaty will come into force?’ That’s the biggest risk for this treaty,” he said in an IDN-INPS interview in February.

The proposed UN Security Council resolution on nuclear testing and the test ban is a win-win for the international community. It will help refocus international attention on the value of the CTBT, the importance of the de facto test moratorium, and recommit states to continue to support the CTBTO’s international monitoring regime.

Shervin Taheran is the Program Associate with the Washington-based Arms Control Association and Project for the CTBT (www.projectforthectbt.org) and is also a member of the CTBTO Youth Initiative. [IDN-InDepthNews – 26 August 2016]