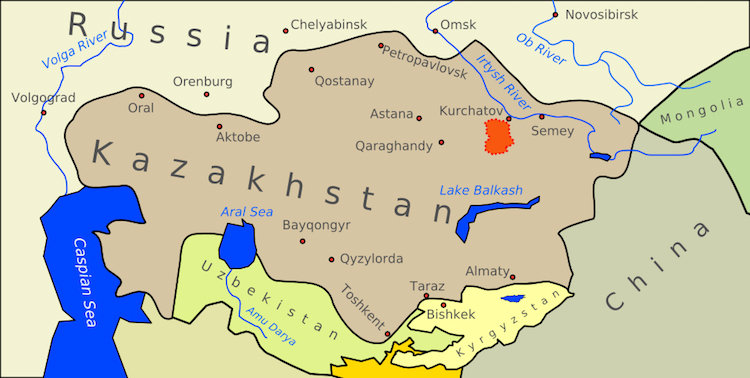 BERLIN (IDN) - For the seventh year in succession, the world would commemorate on August 29 the International Day against Nuclear Tests, which would coincide with the 25th anniversary of the closure of the Semipalatinsk Nuclear Test site the central Asian republic inherited from the Soviet Union in the aftermath of its breakup.

The ATOM Project initiated a global moment of silence on that day to honour all victims of nuclear weapons testing. Kazakhstan suffered more than 450 Soviet nuclear weapons tests at the Semipalatinsk site beginning August 29, 1949 and ending on that date in 1991 when the country's first and current President Nursultan Nazarbayev, responding to a civil society campaign, shut down the site.

It was at the initiative of the Republic of Kazakhstan, together with a large number of sponsors and cosponsors that the 64th session of the United Nations General Assembly on December 2, 2009 unanimously adopted resolution 64/35 declaring August 29 the International Day against Nuclear Tests.

The resolution calls for increasing awareness and education “about the effects of nuclear weapon test explosions or any other nuclear explosions and the need for their cessation as one of the means of achieving the goal of a nuclear-weapon-free world".

This year's commemoration would be accompanied, among others, by the international conference 'Building a Nuclear Weapon Free World' in Astana, the capital of Kazakhstan. It is being co-hosted by Kazakhstan Foreign Minister Erlan Idrissov, Senate President Kasym-Zhomart Tokayev and Parliamentarians for Nuclear Non-Proliferation and Disarmament (PNND).

The conference will be addressed by Kazakhstan President Nazarbayev, and will gather leading parliamentarians, prominent political leaders, diplomats and disarmament experts as well as religious leaders and civil society representatives from around the world to discuss further steps towards global nuclear nonproliferation and disarmament.

The conference comes within days of the UN Open Ended Working Group concluding its sessions on August 19 on Taking Forward Multilateral Nuclear Disarmament Negotiations with a group of non-nuclear countries pushing through a proposal to initiate negotiations in 2017 to prohibit nuclear weapons. (Read: Wide Support for UN Talks on a Legal Ban-the-Bomb Tool)

Also, the PNND conference is taking place a few weeks before governments meet at the UN headquarters in New York for the General Assembly where they would consider a proposal to initiate negotiations on a legal instrument to prohibit nuclear weapons.

A compelling reason to observe the International Day against Nuclear Tests – a day on which educational events, activities and messages aim to capture the world’s attention and underscore the need for a unified attempt in preventing further nuclear weapons testing – is that the international instrument to put an end to all forms of nuclear testing, the 1996 Comprehensive Nuclear-Test-Ban Treaty (CTBT), has yet to come into force.

According to the UN, since the establishment of the International Day against Nuclear Tests, many bilateral and multilateral governmental level developments as well as broad movements in civil society and efforts of the Secretary-General himself have helped to advance the cause of banning nuclear tests.

First proposed in October 2013, resolution A/RES/ 68/32 was a follow-up to the high-level meeting on nuclear disarmament on September 26, 2013 in the UN General Assembly. The International Day for the Total Elimination of Nuclear Weapons was observed for the first time in September 2014.

UN Secretary-General Ban Ki-moon stated with great clarity: “A world free of nuclear weapons would be a global public good of the highest order.” Defining a ban on nuclear weapons as “vital”, in May of 2010, all the States Parties to the Treaty on the Non-proliferation of Nuclear Weapons, committed themselves to aim to “achieve the peace and security of a world without nuclear weapons”.

The International Day against Nuclear Tests, together with other events and actions, has fostered a global environment with more optimistic prospects towards a world free of nuclear weapons. There have been visible signs of progress on various fronts but, equally, challenges remain.

This was most apparent at the 2015 Review Conference on the Treaty of Non-Proliferation of Nuclear Weapons (NPT) held at the United Nations in New York from April 27 to May 22. Parties to the Treaty failed to come to an agreement on the substantive part of the draft Final Document.

In a Statement to the Conference on Disarmament (CD) on 7 July 2015, Kim Won-soo, Acting High Representative for Disarmament Affairs, said: “The failure of the NPT Review Conference to reach a consensus outcome – and the frustration felt by States parties – makes the imperative for the CD to break the two decade-long stalemate even more urgent.” [IDN-InDepthNews – 22 August 2016]

Image: The 18,000 sq. km expanse of the Semipalatinsk Test Site (indicated in red), attached to Kurchatov (along the Irtysh river), and near Semey as well as Karagandy and Astana. The site comprised an area the size of Wales. Credit: Wikimedia Commons