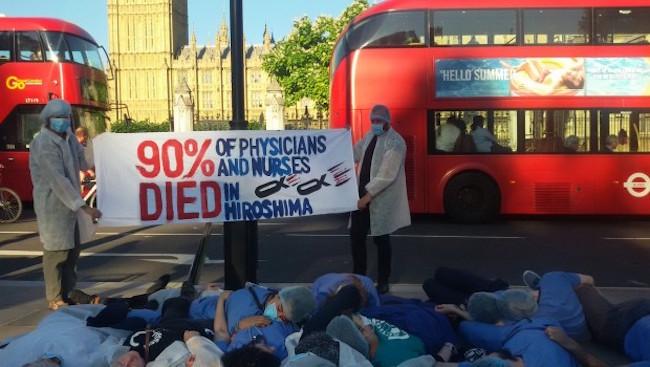 LONDON (ICAN) - Late on Monday 18 July, the British parliament voted in favour of building four new nuclear-powered submarines to carry US Trident missiles armed with modernized nuclear warheads for the next half century.

The vote gives permission to the government to sign multi-billion pound contracts with the aim of ensuring that the UK will continue to possess and deploy an enormously dangerous arsenal of weapons of mass destruction, threatening other countries and exposing its people to serious risks of nuclear accidents, use or attacks for a further generation.

Earlier in the day, UK Defence Secretary Michael Fallon claimed that nuclear weapons are needed to deter all threats, including from IS, North Korea and terrorists, and that since the UK could not predict what security threats it would face in 2040-2050, it had to continue to possess its own weapons of mass destruction.

Opposition MPs from the Scottish National Party (SNP), the Labour Party and the Green Party pointed out that these kinds of arguments only serve to encourage proliferation of nuclear weapons and seriously undermine the UK’s commitments to the nuclear Non-Proliferation Treaty (NPT).

Yet, 48 years on, the UK is boycotting new UN nuclear disarmament talks, established on the basis of new evidence about the humanitarian consequences of nuclear weapons and the risk of their use, be it accidental or intentional.

The fact that a majority of British MPs voted to possess and deploy nuclear weapons for at least another 45 years highlights the UK’s dishonest stance on nuclear disarmament and non-proliferation.

“Nuclear weapons are not a source of pride or an insurance policy,” said Beatrice Fihn, Executive Director of ICAN, “they are deeply immoral, inhumane and indiscriminate weapons designed to cause as much death and destruction as possible.

It was shocking to hear the new Prime Minister Theresa May declare with such pride that she would not hesitate to fire Trident at cities full of civilian men, women and children. No government that claims to be committed to humanitarian law and the protection of civilians should deem it acceptable to possess and use nuclear weapons.”.

Despite the UK parliament voting to renew their Trident nuclear weapons programme, opinion polls show that the United Kingdom is not unified in this view. There is overwhelming opposition in Scotland, where the UK’s nuclear missiles are actually stored and deployed, and opinion polls in the rest of the UK show strong support for getting rid of the hugely expensive nuclear weapons programme through a multilaterally negotiated process.

The British decision to continue its reliance on weapons of mass destruction comes at a time when the rest of the world is moving towards prohibiting these weapons outright. Over 120 states have endorsed the international “humanitarian pledge”, in which they commit to fill the legal gap for the prohibition and elimination of nuclear weapons.

Several proposals for starting negotiations on a treaty banning nuclear weapons in 2017 were made at the UN working group on multilateral nuclear disarmament in May, and it’s possible that the UN General Assembly will vote on taking forward such negotiations later this year in October.

The UN working group on taking forward multilateral nuclear disarmament negotiations will conclude its work and make recommendations to the General Assembly on a treaty banning nuclear weapons in August. The United Kingdom decided to boycott this working group after being denied the right to veto the conclusions of the discussions and the recommendations. [INPS – 20 July 2016]