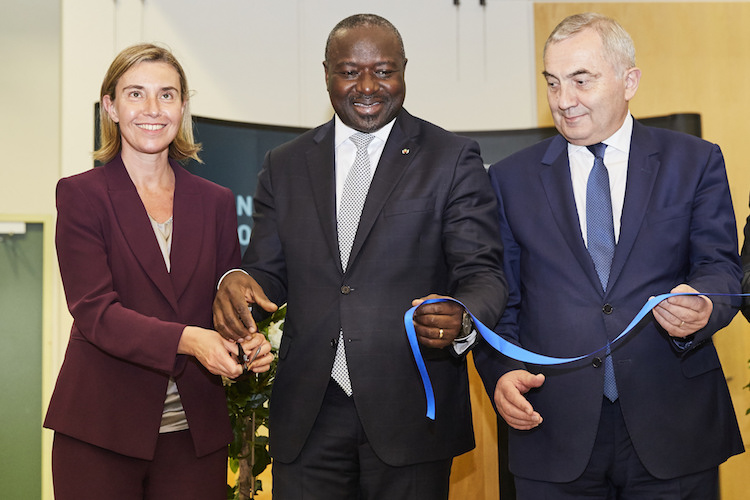 BERLIN | VIENNA (IDN | INPS) – If it were for Dr. Lassina Zerbo, Executive Secretary of the Comprehensive Nuclear-Test-Ban Treaty Organization (CTBTO), the treaty banning all nuclear tests would have entered into force “yesterday”.

This view not only reflects what he terms in a lighter vein his “notoriously optimistic” perspective. It is also grounded in a series of signals underlining that “the discussion about ratification has moved to a new level” so that the Comprehensive Nuclear-Test-Ban Treaty, better known by its acronym CTBT, should not remain an “unfinished business”. [P14] JAPANESE TEXT VERSION PDF | SPANISH

In an exclusive email interview with IDN-InDepthNews, flagship of the International Press Syndicate (INPS), he spells out the reasons for his ‘optimism’, adding: A UN Security Council resolution banning nuclear tests, as President Obama is reported to be contemplating, might be a good thing. “But what really counts is the ratification of the remaining eight countries.” These are China, DPRK (North Korea), Egypt, India, Iran, Israel, Pakistan, and the United States.

China, Egypt, Iran, Israel and the United States are among 183 that have signed the CTBT since it was opened for signature in 1996. But these do not count among 164 States that have ratified.

Some of the reasons underlying Dr. Zerbo’s optimism are: It is the first time that the head of the CTBTO was received by an Israeli Prime Minister in June 2016. European Parliament and Federica Mogherini, European Union’s High Representative for Foreign and Security Policy, also a member of CTBTO’s Group of Eminent Persons, are demonstrating “creative leadership”.

Kazakhstan, which has voluntarily relinquished nuclear weapons, and Japan that commemorated in 2015 the 70th anniversary of the ruthless atomic bombing of Hiroshima and Nagasaki, are staunch supporters of early entry into force of the Treaty.

Besides, Chinese authorities have told the CTBTO chief that their ratification is not conditional upon U.S. ratification. “We do have supporters on both sides of the Senate aisle,” says Dr. Zerbo. Senior U.S. officials, including Undersecretary Rose Gottemoeller have stated that the United States is considering “ways to affirm the international norm against nuclear testing”.

Following is the full text of the email interview: (Read also transcript of a video interview during the symposium 'Science and Diplomacy for Peace and Security: the CTBT@20' from January 25 to February 4, 2016 at the Vienna International Centre in Austria.)

IDN | INPS: Your remarks after the meeting with Prime Minister Netanyahu (in Jerusalem on June 20) indicated that sometime in the not-too-distant future we might celebrate the first anniversary of the CTBT’s entry into force. Should we expect that not-too-distant future before the end of the year or a bit later?

CTBTO Executive Secretary Dr. Lassina Zerbo: You know that I am notoriously optimistic. But the CTBT will enter into force only 180 days after the last ratification has been deposited. So even if China, Egypt, India, Iran, Israel, North Korea, Pakistan, and the United States were to ratify later today, I’m afraid we would not make it in 2016.

So when will the CTBT enter into force? Yesterday, if it were up to me.

But let me be serious: we are seeing quite a lot of positive signs in this 20th anniversary year. There is a lot of support from our Member States and the fact that the head of the CTBTO was received for the first time by an Israeli Prime Minster shows that the country is in favour of this Treaty, and that the discussion about ratification has moved to a new level.

IDN | INPS: EU Foreign Affairs and Security Policy High Representative Federica Mogherini said in her remarks at the 20th anniversary ministerial meeting in June: “We have not given up our goal. But to achieve it, we need a stronger push and more unity from all of us.” Also Rose Gottemoeller said: “We cannot, and must not, give up.” How do you think can such a “stronger push and more unity” be achieved?

Dr. Zerbo: If CTBT Member States are serious about achieving entry into force – and I believe they are – then they must be willing to expend political capital. What we need is political leadership: governments willing to engage with their own legislators, ratifying countries working with non-ratifiers to address concern and create incentives, working with civil society and thinking outside the box.

As Kazakhstan’s Foreign Minister said last fall (September 29, 2015) in New York at the Article XIV Conference on Facilitating Entry into Force, “business-as-usual” efforts will not suffice.

Together with my friend High Representative Federica Mogherini, a member of our Group of Eminent Persons, we briefed the European Union’s Foreign Affairs Committee on July 7, 2016.

One of the suggestions the parliamentarians made was to include the CTBT in any future third country trade agreements. This is exactly the kind of creative leadership approach I am talking about. Or take India’s desire to join the NSG (Nuclear Suppliers Group) – why not include opening discussions on the CTBT in the equation?

IDN | INPS: Despite President Obama’s strong support for the Treaty, its ratification has been blocked by the Senate, with Republicans insisting the CTBT will hamper the efficacy of the U.S. nuclear arsenal. China’s reluctance to ratify the treaty is said to be linked to the American failure to do so. What prospects do you see for the Treaty’s ratification after Obama finishes his term?

Dr. Zerbo: In the United States, ratification has not been “blocked” by the Senate so much as there simply has not been renewed consideration and sustained discussion about the Treaty. Most Republicans and Democrats in the Senate, I am told, simply have not focused on the subject, and are not familiar with some of the technical advances that address key concerns that led to the negative Senate vote back in 1999.

We do have supporters on both sides of the Senate aisle. Former Secretary of State George Shultz once said that his fellow Republicans “might have been right voting against [the CTBT back in 1999] but they would be right voting for it now, based on these new facts”.

These facts are the proven efficiency of our verification regime, which was not much more than a blueprint in 1999, and the success of the U.S. Stockpile Stewardship Program that enables the U.S. lab directors to certify the safety and reliability of the arsenal without explosive testing.

On China, we have been told by the authorities that their ratification is not conditional upon U.S. ratification. Again, this is an opportunity to show leadership and move forward.

IDN | INPS: Do you see a possibility to have India emulating the example of the U.S., China and Pakistan and halting its boycott of CTBTO meetings? I understand that you are trying to build a pro-CTBT lobby in India.

Dr. Zerbo: India and the CTBTO have a lot to offer each other – I am thinking of the spin-off applications of our monitoring data for disaster early warning and scientific research on the Earth’s processes. Vice-versa, the expertise of Indian scientists would help us further enhance our monitoring system.

On the other hand, no serious Indian nuclear scientist or political force wants a return to nuclear testing. So, again, I am optimistic that the country that launched the idea of a nuclear test ban – four decades before the CTBT was negotiated – will eventually join the family of CTBT Member States.

IDN | INPS: There are reports off and on that if CTBT continues to remain an ‘unfinished business’ the Preparatory Commission might find political and financial support eroding? How do you evaluate such reports?

Dr. Zerbo: While we are very grateful for the level of political and financial support we receive from our Member States at the moment, this certainly remains a mid-term risk. Some countries have clearly stated that they will not indefinitely continue to support the test-ban and its organization if the few hold-out states continue to block entry into force.

This is why it is so important to get the entry into force process back on track, especially in this 20th anniversary year. To sum it up: it is time to finish what we started!

IDN | INPS: According to reports, Obama plans to pursue a UN Security Council resolution affirming a ban on the testing of nuclear weapons – as an alternative to the U.S. ratifying the CTBT. What do you think of that?

Dr. Zerbo: I very much welcome the strong support shown to the CTBT and the CTBTO by President Obama and his administration, and I am grateful for his efforts. Senior U.S. officials, including Undersecretary Rose Gottemoeller on June 13 in Vienna, have stated that the United States is considering “ways to affirm the international norm against nuclear testing”.

I also believe that any step reaffirming not just the United States’ commitment to a nuclear test ban, but that of the international community is a step in the right direction, and a resolution by the Security Council would clearly send a strong signal.

Nevertheless, we should not allow this to divert our attention from the real unfinished business: the fact that we have a Treaty which is operational, yet still not in force, after 20 years. A Security Council resolution might be a good thing, but what really counts is the ratification of the remaining eight countries. [IDN-InDepthNews – 18 July 2016]