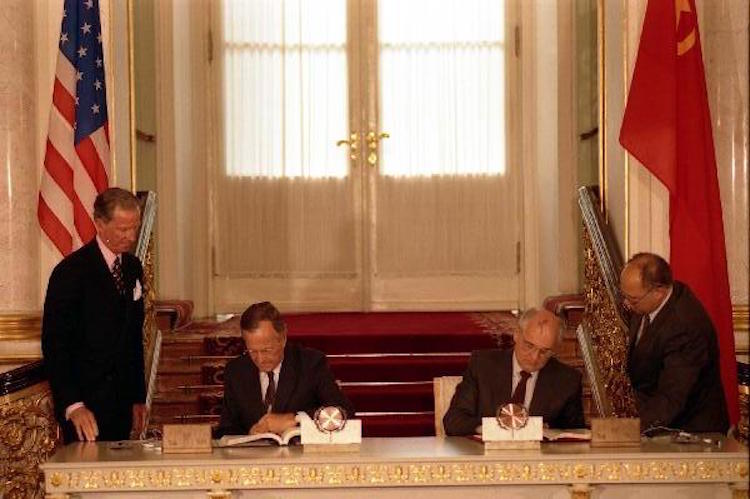 LUND, Sweden (IDN-INPS) - During the Cold War barely a week went by without some reportage or debate on nuclear weapons. Not today. Yet most of the nuclear weapons around then are still around.

It would be alright if they were left to quietly rust in their silos. But they are not. When in 2010 President Barack Obama made a deal with Russian President Dimitri Medvedev to cut their respective arsenals of strategic missiles by one-third the Republican-dominated U.S. Congress, as the price for its ratification of the deal, decreed that Obama and future presidents be made to spend a trillion dollars on updating and modernizing America’s massive arsenal.

Now that chicken is coming home to roost – and a few other chickens too.

President Barack Obama’s unexpected legacy is that he has presided over an America that has been at war longer than any previous president. Moreover, of recent presidents, apart from Bill Clinton, he has cut the U.S. nuclear weapon stockpile at the slowest rate.

The Republican’s extreme right clipped Obama’s wings. Of that there is no doubt, making it impossible thus far, to negotiate with Russia any further cuts. At the same time the counterproductive U.S.-EU confrontation with Russia over Ukraine pushed President Vladimir Putin into the foolish tactic of talking about the possible use of nuclear weapons and deploying intimidating flights over the airspace of the Baltic Sea. When Putin was asked a year ago if Russia was prepared to bring nuclear weapons into play in the confrontation over Crimea, he replied: ”We were ready.”

Yet not all can be pinned on Congress or Putin. Obama’s vision of a nuclear-free world outlined in his famous speech in Prague in April 2009 has come to naught. “The Prague vision has been empty of calories,” says Bruce Blair, the former Air Force nuclear launch officer who revealed the tenuous controls on launching that exists in the underground silos that contain long-range ballistic missiles.

Why for example has Obama set about cutting the proposed budget for nuclear security? Yet (according to some figures) there are a 200,000 putative nuclear weapons in the world in the form of highly enriched uranium and plutonium, as well as those already in service. The cuts will affect the Global Material Security Program which has the task of improving the security of nuclear materials around the world, securing orphaned or disused radiological sources and strengthening nuclear smuggling detection.

Why is Obama building the Ballistic Missile Defence System, based in Romania and Poland? It is meant to fire “a bullet at a bullet”, supposedly to defend Europe and the U.S. against a nuclear attack by Iran. (Dutch and Danish warships are also being fitted with sensors that plug into the system.) But one of Obama’s greatest achievements is the nuclear defanging of Iran – an effort that was strongly helped by Russia’s contribution to the negotiations.

Obama and the Pentagon say this is not about Russia. But Russia believes it is. NATO’s Secretary-General Jens Stolenberg, says that “many countries are seeking to develop or acquire their own ballistic missiles”. But which ones? North Korea? It would not use this flight-path. Or Pakistan and India which only aim at each other and in India’s case at China. Richard Burt, who negotiated the path-breaking Strategic Arms Reduction Treaty with Russia at the time of President George H. W. Bush says: “It is debatable whether other countries will go nuclear.”

Stoltenberg also defends the Ballistic Missile System, arguing that “the interceptors are too few and located too far south to intercept Russian intercontinental missiles”. Yet once the system is fully in place it can be upgraded relatively easily and this is what perturbs Russia. Even now it could probably take out in flight Russian short and medium range missiles.

Jonathan Beale, the BBC’s defence correspondent, recently broadcast an analysis of the System. He concludes that “NATO and the U.S. may risk being accused of not telling the whole truth”.

Recently a dozen Democratic senators wrote to Obama asking him to “redouble” his efforts to reduce nuclear threats”. They went on to say that Washington should propose again that the U.S. and Russia reduce their nuclear arsenals to 1,000 weapons and 500 delivery systems apiece. That is less than half of what they currently have deployed. Richard Burt believes that Washington could be doing more to engage Moscow. “I don’t think we are trying hard enough to bring Putin to the table”.

Obama has only six months left to make his mark. A deal with Russia could not be negotiated in that time even if he wanted to. But he could emulate his predecessor, George W. Bush, who simply announced he was unilaterally putting 1,000 nuclear missiles on the shelf. He could also cancel the Ballistic Missile Defence System. [IDN-INPS – 17 May 2016]

Note: Jonathan Power syndicates his opinion articles. He forwarded this and his previous Viewpoints for publication in IDN-INPS.

Photo: On 31 July 1991, the US President, George Bush (left), and General Secretary of the Communist Party of the Soviet Union, Mikhail Gorbachev (right), sign the START I Agreement for the mutual elimination of the two countries’ strategic nuclear weapons.

Copyright: This email address is being protected from spambots. You need JavaScript enabled to view it.