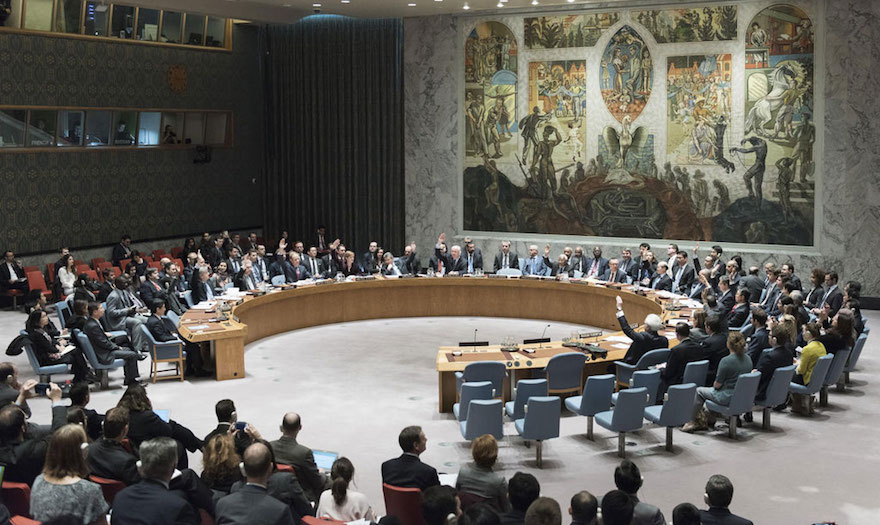 The resolution, adopted unanimously by the UNSC, imposed some of the toughest sanctions on North Korea calling on all UN member states to inspect cargo destined for – and coming from – Pyongyang, in all airport and sea ports.

The sanctions include restrictions on the export of coal, iron, iron ore or other minerals, while prohibiting the supply of aviation fuel, including rocket fuel. The resolution also mandates member states to expel North Korean diplomats involved in Illicit trafficking.

But how far the sanctions will be implemented is left to be seen – particularly by China which is a close ally of the Democratic People’s Republic of Korea (DPRK). Both China and Russia voted in favour of the resolution.

After the vote, U.S. President Barack Obama said: “Today, the international community, speaking with one voice, has sent Pyongyang a simple message: North Korea must abandon these dangerous programmes and choose a better path for its people.”

Rather, the resolution may well propel the DPRK to be even more defiant in continuing with its nuclear and rocket/missile programmes, he noted. He pointed out that sanctions alone have never been successful is reversing States' nuclear weapon programmes.

“It is highly regrettable that no policy of engagement is offered by the Security Council, China and the United States,” said Rauf, the former Head of Verification & Security Policy Coordination at the Office of the Director General at the International Atomic Energy Agency (IAEA) during 2002-2011, where he handled the DPRK nuclear file.

Rauf said China's support for this resolution reflects its unhappiness with the DPRK but also is indicative of its diplomatic vulnerabilities in the face of a declining economy.

Furthermore, China's expansionist activities in the South China Sea including constructing artificial islands hosting military bases is more important and given the hostility and reaction to this policy from the Association of Southeast Asian Nations (ASEAN) and the U.S., China's support for the new DPRK resolution is a smart move to deflect attention, he argued.

Just after the resolution was adopted, UN Secretary-General Ban Ki-moon, a former Foreign Minister of South Korea, said the unanimous action by the Security Council “has sent a clear message that the DPRK must return to full compliance with its international obligations”.

He urged the DPRK to abide by the resolution and called upon all Member States to ensure its implementation. “This firm response by the Security Council should put an end to the cycle of provocation and lead to the resumption of dialogue in accordance with the unified view of the international community,” said Ban.

The Secretary-General reaffirmed his commitment to working with all sides to reduce tensions and achieve the verifiable de-nuclearisation of the Korean Peninsula. He also reiterated the critical role of international assistance in safeguarding the lives of millions in the country.

At the same time, he renewed his call on the DPRK to do more for the lives of its people. Genuine improvement in human rights is a necessary basis for long-term security and stability.

U.S. Ambassador to the UN Samantha Power said DPRK’s obsessive pursuit of weapons of mass destruction not only causes profound suffering for the people of North Korea, but also poses an extraordinary and growing threat to peace and security in the peninsula, the region, and the world.

She said with each nuclear test and launch using ballistic missile technology, the DPRK improves its capability to carry out a nuclear missile attack not only in the region, but also a continent away. “That means having the ability to strike most of the countries sitting on this Council. Think about that.”

It is also the only UN Member State that routinely threatens other countries with nuclear annihilation, including multiple members of this Council on different occasions, Power said.

On the sanctions, she pointed out under the latest resolution, cargo going into and coming out of North Korea will be treated as suspicious, and countries will be required to inspect it, whether it goes by air, land, or sea. This is hugely significant.

For years, she pointed out, the DPRK deployed arms dealers, smugglers, financiers, and other enablers of its illicit weapons programs and claimed that they were diplomats and government representatives around the world.

Despite previous financial sanctions that constrained North Korea’s access to the international financial system, North Korean banks were still able to do business on foreign territory, allowing the government to fund its illicit programs.

Under the new resolution, states around the world will have to shut down DPRK financial institutions in their territory. [IDN-InDepthNews – 3 March 2016]