‘Ratify Treaty to Ban Nuclear Testing Before Fatigue Creeps in’ 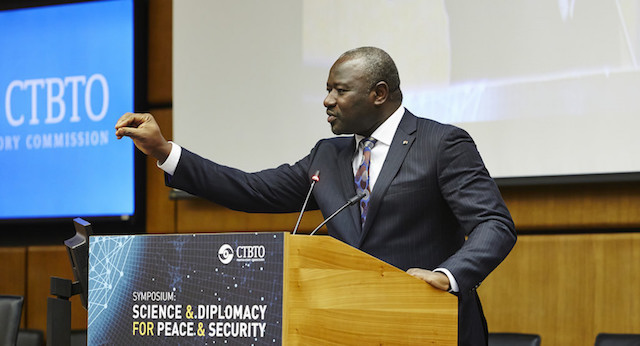 BERLIN | VIENNA (IDN) - Twenty years after it was opened for signature, the CTBT has come to stay as a de facto global treaty banning all nuclear testing – “if we take North Korea outside of the scope” – but Dr Zerbo Lassina wants to see it de jure because he is concerned that the longer it takes for its entry into force, the greater is the risk of a “fatigue” creeping in that could lead to people saying: “Why are we investing in something if we don’t know when the treaty will come into force?”

Dr Zerbo Lassina is Executive Secretary of an organization called the CTBTO, which is meant to facilitate entry into force of the treaty prohibiting all nuclear tests. In an exclusive interview to IDN-InDepthNews, flagship of the International Press Syndicate (INPS), he pleads for urgent action by all the eight remaining countries whose ratification is necessary for CTBT’s entry to force.

The interview was conducted by Ramesh Jaura, Director-General and Editor-in-Chief of INPS and IDN during the symposium 'Science and Diplomacy for Peace and Security: the CTBT@20' from January 25 to February 4, 2016 at the Vienna International Centre in Austria.

The transcription of the interview available as video follows:

Question: Why is the CTBT important? How is it to be distinguished from NPT, the Nuclear Non-Proliferation Treaty?

Dr Zerbo: The CTBT is a part of the NPT, one can say this because in the many articles under the NPT, the CTBT comes higher up, and if we take the last review conference: 2015 review conference, NPT review conference in New York, if there’s one issue that was the consensual issue that was the CTBT, the Comprehensive Test Ban Treaty – for several reasons. I see the test ban treaty in the context of non-proliferation and ultimately disarmament as a low-hanging fruit. Why? Because you’ve 183 that have signed the treaty, 164 that have ratified and in our Annex II framework, there’re 8 remaining countries whose ratification is necessary for its entry to force.

Q: You would call them rogue states?

Q: But why is it that this treaty, as far as its coming into force is concerned, facing such an uphill task? It’s twenty years now that it was opened for signatures – in 1996.

Dr Zerbo: First of all, I don’t think anyone had anticipated that entry into force of the treaty of the CTBT would take that long. They’re basically banking on the experience of the OPCW, the chemical weapon convention, whereby it took two-three years for its entry into force. I think many underestimated the geopolitical situation as things were moving and the fact that it was rejected by the U.S. Senate didn’t help because it brought doubts in many heads with regard to relevance of ratifying the CTBT. If in 1999, the U.S. had ratified the CTBT, it would have been a completely different ballgame today. We know, nevertheless, that the U.S. remains committed to ratifying the CTBT but the administration had its hands tied because they didn’t have the number at the senate.

Q: What makes you optimistic that the numbers would change?

Dr Zerbo: What makes me optimistic is because I don’t see the CTBT as a partisan issue. It’s not Republican against Democrat when you vote for or against the CTBT. It should be a bi-partisan issue whereby both Republican and Democrat see the validity, the importance, the necessity of the CTBT in the US national security framework. That’s what we should work on. Not to say we need more Democrats to get the CTBT ratified or we need more Republicans to not get it ratified. I don’t see it this way. I see it as an effort to get both parties to come together to consider this issue as important for U.S. national security and to do so, I think the administration is on the right track even if . . . people like us who are heading this organisation feel that it’s a bit slow. I think it’s on right track because you’ve to educate people for them to understand before you get into a debate where you can speak the same language, you can be in the same level-playing field where you can talk, debate and then come up with a solution that could lead to the ratification.

Q: On the basis of what you’re saying, it’s obvious that yours is an unflinching commitment to this CTBT and its coming into force. It’s only in 2013 that you became the Executive Secretary and it’s widely known that you’ve undertaken a number of efforts, for example, by setting up a group of eminent persons. Could you briefly explain what are the other activities that you’ve undertaken to create this awareness?

Dr Zerbo: What activities have been undertaken to help to move on the CTBT entry into force. Look, I took over the position as Executive Secretary in 2013. A lot had been done through my predecessors and together with me because I was the director of a key division, the International Data Centre. But, if a lot has been done, we probably haven’t done enough because business is not finished. The CTBT is not in force yet. So now let me to go to what we have done. What we’ve done? We’ve given to the international community the technical and political tools for them to trust what they designed conceptually more than twenty years ago, when nobody believed that there would be a possibility to establish an international monitoring system and a verification regime that would verify compliance of the treaty to that extent.

When I say to that extent, it’s the efficiency, the reliability and the commitment that came with the contribution of talented staff in the secretariat to have detected afore an unusual event in the Korean peninsula and put all the information, the technical specifications under disposal of state signatories in the time frame of entry into force.

This was the key. We’ve proven to everyone that they’ve invested in something that pays off right now because they can tangibly see where the money has gone. It’s gone into building this deterrent in a way where nobody can cheat with regard to nuclear testing, explosive testing without being detected by our international monitoring system together with the national technical means of the state parties.

Q: Where do we go from here?

Dr Zerbo: Where do we go from here? We should bank on what was achieved technically and politically to put in place the monitoring framework and the verification process for the compliance of the Comprehensive Test Ban Treaty. That is a given (situation), if that’s what serves the purpose to convince state parties to ratify and then to move for the entry into force, what we need is leadership. Leadership in acknowledging what hasn’t worked – meaning the frustrations, the concerns of those eight remaining countries, to work on those concerns and work on those frustrations. It’s the only way by sitting around the table that we can address the issues. We cannot keep on saying India and Pakistan have not signed the treaty. North Korea has not signed the treaty. Why bother at this point in time? We can’t let the time pass where and when North Korea is continuing testing because we don’t know who will be the next.

Q: There’s a view one has heard here at the symposium in Vienna that it should not be left only to the United States to ratify the treaty. It can be done independently. For example, India and Pakistan could do that. Israel could do that. Iran could do it. Do you think this is something which is realistic, this approach?

Dr Zerbo: I think it is realistic for a simple reason where, you know, it’s the right timing in everything and right now if you look at the eight countries, which one of them has a situation that we can consider right or conducive for CTBT ratification. If I speak today, I would say Israel and Iran. And you ask me ‘why’. Why? Under the JCPOA, the Joint Consultative Plan Of Action, under the Iran deal, in Iran they are showing that through implementing this deal that they have no intention whatsoever to develop nuclear weapons. If Iran under the implementation of the JCPOA is showing that, the ratification of the CTBT becomes more than relevant to Iran. If that’s the context, Israel has nothing to lose. The threat that they had with regard to Iran developing nuclear weapon is gone. If that threat is gone, let them join forces and consider the CTBT ratification together.

But it hasn’t been sealed or said anywhere in writing. It’s a gentleman’s agreement. You just heard India said they would not stop the entry into force of the CTBT. They would not test. We hear it from China. We hear it from U.S. But shouldn’t we have a framework where this is said, written and sealed, a condition that could lead into their ratification of CTBT. This is what we need. To do that, you need a platform where those can discuss together.

Q: So that would mean that one should consider the CTBT as a de facto  though not a de jure treaty.

Dr Zerbo: The ‘de facto’ term that led to a de facto norm has been used and is being used. I did use it myself but I want to stop using it. Because we don’t need de facto we need the reality. We need de jure. So if you get satisfied with de facto, you never move forward. And this is the risk although having a de facto norm is still good because it is a quick way, and this is what we have right now – if we take North Korea outside of the scope. But more importantly my issue is the risk that the longer the entry into force of the CTBT is, the more risk we have with regard to treaty fatigue that could lead to people saying, ‘Why are we investing in something if we don’t know when the treaty will come into force?’ That’s the biggest risk for this treaty.

Q: Very true. Two brief questions. When are you going to North Korea?

Dr Zerbo: When I am invited. If you give me an invitation, I will get on the next plane to North Korea.

Q: Have you talked to the Chinese about this?

Q: When do you think the treaty will become reality?

Dr Zerbo: Realistically... In this 21st century can we talk about ‘realistically’? That’s the question I have to ask and I’m going to answer the same question by saying, ‘What is realistic today?’ Things can change tomorrow. It takes a huge crisis and the geopolitical context changes drastically and we may find ourselves in a situation where people find the urgency to sit around the table and then to decide on this treaty. That could happen. The same way it happened for the Syria issue in tern of the chemical weapons. I’m not saying we need a detonation before we do that but who knows. What happens in the world that necessitates a situation where people feel the urgency to sit together and then deal with this what I call a low-hanging fruit before the situation gets more complex. And in that sense it could happen any time because I’m optimistic. [IDN-InDepthNews – 11 February 2016]