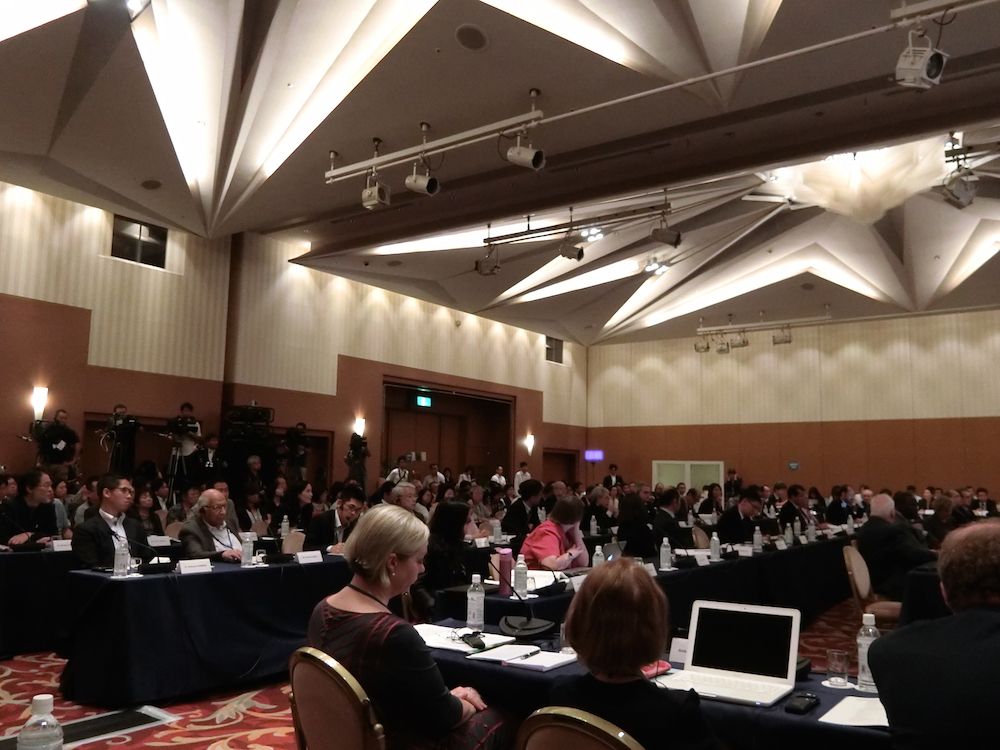 HIROSHIMA (IDN) - Calls are growing for organising a nuclear disarmament summit next year in Hiroshima, one of the only two cities, along with Nagasaki, which have until now suffered the devastating atomic bombings 70 years ago. But indications are that there is only a remote possibility that such a gathering would indeed take place.

The move gathered momentum during a three-day UN Conference on Disarmament Issues in Hiroshima that concluded on August 28. Several participants from the academia and civil society organisations stressed the need for such a gathering with a view to ushering in a world free of nuclear weapons.

The conference was organised by the Bangkok-based United Nations Regional Centre for Peace and Disarmament in Asia and the Pacific (UNRCPD) in cooperation with the Ministry of Foreign Affairs (MOFA) of Japan and the city and Prefecture of Hiroshima. More than 80 government officials and experts, also from beyond the region, attended the deliberations.

It was the twenty-fifth annual meet of its kind held in Japan, which acquired a particular importance against the backdrop of the 70th anniversary of the atomic bombings of Hiroshima and Nagasaki, and of the founding of the UN.

Hiroshima Prefecture Governor Hidehiko Yuzaki, the city’s Mayor Karzumi Matsui – son of a hibakusha father and president of the Mayors for Peace organisation comprising 6,779 cities in 161 countries and regions – as well as his counterpart from Nagasaki, Tomihisa Taue, pleaded for strengthening a concerted campaign for a nuclear free world. Taue is also the president of the National Council of Japan’s Nuclear-Free Local Authorities.

Hiroshima and Nagasaki city leaders welcomed suggestions for a nuclear disarmament summit in 2016 in Hiroshima, which they said would lend added thrust to awareness raising for a world free of nuclear weapons.

Though Foreign Ministry officials refrained from expressing public support for the proposal, Japan’s Foreign Minister Fumio Kishida, who hails from Hiroshima, said in a message to the UNRCPD conference: “ . . . the reality of atomic bombings is far from being sufficiently understood worldwide.”

Kishida also emphasized the need for nuclear-weapon and non-nuclear weapon states to “work together in steadily advancing practical and concrete measures in order to make real progress in nuclear disarmament”.

Japan, he said, would submit to the forthcoming 70th session of the UN General Assembly beginning September 15 “a new draft resolution on the total elimination of nuclear weapons”. Such a resolution, he said, was “appropriate to the 70th year since the atomic bombings and could serve as guidelines for the international community for the next five years, on the basis of the Review Conference”. The next NPT Review Conference is expected to be held in 2020.

The NPT (Treaty on the Non-Proliferation of Nuclear Weapons) Review Conference from April 27 to May 22, 2015 at the UN headquarters drew the focus in presentations and panel discussions at the UNRCPD conference in Hiroshima.

Ambassador Taous Feroukhi of Algeria, who presided over the NPT Review Conference, explained at length why the gathering had failed to agree on a universally acceptable draft final text despite a far-reaching consensus on a wide range of crucial issues: refusal of the U.S., Britain and Canada to accept the proposal for convening a conference by March 1, 2016 for a Middle East Zone Free of Weapons of Mass Destruction (WMDs).

Addressing the issue, Japan’s Foreign Minister Kishida joined several government officials and experts in expressing his regrets that the draft final document was not adopted due to the issue of WMDs.

Kishida noted that the failure to establish a new Action Plan at the Review Conference had led to a debate over the viability of the NPT. “However,” he added, “I would like to make one thing crystal clear. The NPT regime has played an extremely important role for peace and stability in the international community; a role that remains unchanged even today.”

The Hiroshima conference not only discussed divergent views on measures to preserve the effective implementation of the NPT, but also the role of the yet to be finalised Comprehensive Test Ban Treaty (CTBT) in achieving the goal of elimination of nuclear weapons, humanitarian consequences of the use of atomic weapons, and the significance of nuclear weapon free zones (NWFZs) for strengthening the non-proliferation regime and nuclear disarmament.

Summing up the deliberations, UNRCPD Director Yuriy Kryvonos said the discussions on “the opportunities and challenges in nuclear disarmament and non-proliferation” had been “candid and dynamic”.

Speakers attached particular attention to the increasing role of local municipalities, civil society and nuclear disarmament education including witnesses of hibakusha (survivors of atomic bombings mostly in their 80s and above) in consolidating common understanding of the threat posed by nuclear weapons for people from all countries around the world regardless whether or not their governments possess nuclear weapons.

Kryvonos said the Hiroshima conference had given “a good start for searching new fresh ideas on how we should move towards our goal – protecting our planet from a risk of using nuclear weapons”. [IDN-InDepthNews – 29 August 2015]