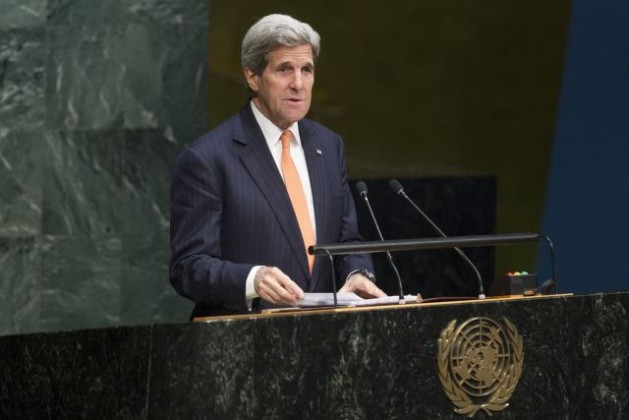 UNITED NATIONS, May 23 2015 (IPS) - After nearly four weeks of negotiations, the Nuclear Non-Proliferation Treaty (NPT) Review Conference ended in a predictable outcome: a text overwhelmingly reflecting the views and interests of the nuclear-armed states and some of their nuclear-dependent allies. [P11] GERMAN | JAPANESE TEXT VERSION PDF

She said it contained no meaningful progress on nuclear disarmament and even rolled back some previous commitments.

But, according to several diplomats, there was one country that emerged victorious: Israel, the only nuclear-armed Middle Eastern nation, which has never fully supported a long outstanding proposal for an international conference for a Middle East free of weapons of mass destruction (WMDs).

As the Review Conference dragged towards midnight Friday, there were three countries – the United States, UK, and Canada (whose current government has been described as “more pro-Israel than Israel itself”) – that said they cannot accept the draft agreement, contained in the Final Document, on convening of the proposed conference by March 1, 2016.

As Acheson put it: “It is perhaps ironic, then, that three of these states prevented the adoption of this outcome document on behalf of Israel, a country with nuclear weapons, that is not even party to the NPT.”

The Review Conference president’s claim that the NPT belongs to all its states parties has never rung more hollow, she added.

Joseph Gerson, disarmament coordinator at the American Friends Service Committee (AFSC) told IPS the United States was primarily responsible, as in the 2005 review conference, for the failure of this year’s critically important NPT Review Conference.

“The United States and Israel, that is, even if Israel is one of the very few nations that has yet to sign onto the NPT,” he pointed out.

Rather than blame Israel, he said, the U.S., Britain and Canada are blaming the victim, charging that Egypt wrecked the conference with its demands that the Review Conference’s final declaration reiterate the call for creation of a Middle East Nuclear Weapons-Free Zone.

But, the tail was once again wagging the dog, said Gerson, who is also the AFSC’s director of Peace and Economic Security Programme.

He said that Reuters news agency reported on Thursday, the day prior to the conclusion of the NPT Review Conference, that the United States sent “a senior U.S. official” to Israel “to discuss the possibility of a compromise” on the draft text of the Review Conference’s final document.

Coming into the 2015 Review Conference, he said, many non-nuclear weapon states were focused on mechanisms and processes to ensure implementation.

In this vein, the draft, but not adopted Final Document, recommended that the General Assembly establish an open-ended working group to “identify and elaborate” effective disarmament measures, including legal agreements for the achievement and maintenance of a nuclear weapons free world.

Regardless of the lack of an NPT outcome, this initiative can and should be pushed at the next General Assembly session on disarmament and international security, this coming fall, said Burroughs, who is also executive director of the U.N. Office of the International Association of Lawyers Against Nuclear Arms (IALANA).

Acheson told IPS that 107 states— the majority of the world’s countries (and of NPT states parties)—have endorsed a Humanitarian Pledge, committing to fill the legal gap for the prohibition and elimination of nuclear weapons.

The outcome from the 2015 NPT Review Conference is the Humanitarian Pledge, she added.

The states endorsing the Pledge now and after this Conference must use it as the basis for a new process to develop a legally-binding instrument prohibiting nuclear weapons.

“This process should begin without delay, even without the participation of the nuclear-armed states. The 70th anniversary of the atomic bombings of Hiroshima and Nagasaki has already been identified as the appropriate milestone for this process to commence.”

Acheson also said a treaty banning nuclear weapons remains the most feasible course of action for states committed to disarmament.

“This Review Conference has demonstrated beyond any doubt that continuing to rely on the nuclear-armed states or their nuclear-dependent allies for leadership or action is futile,” she said.

“Those who reject nuclear weapons must have the courage of their convictions to move ahead without the nuclear-armed states, to take back ground from the violent few who purport to run the world, and build a new reality of human security and global justice,” Acheson declared.

Gerson told IPS the greater tragedy is that the failure of the Review Conference further undermines the credibility of the NPT, increasing the dangers of nuclear weapons proliferation and doing nothing to stanch new nuclear arms races as the nuclear powers “modernize” their nuclear arsenals and delivery systems for the 21st century continues apace.

He said the failure of the Review Conference increases the dangers of nuclear catastrophe and the likelihood of nuclear winter.

The U.S. veto illustrates the central importance of breaking the silos of single issue popular movements if the people’s power needed to move governments – especially the United States – is to be built.

Had there been more unity between the U.S. nuclear disarmament movement and forces pressing for a just Israeli-Palestinian peace in recent decades, the outcome of the Review Conference could have been different, noted Gerson.

“If we are to prevail, nuclear disarmament movements must make common cause with movements for peace, justice and environmental sustainability.”

Despite commitments made in 1995, when the NPT was indefinitely extended and in subsequent Review Conferences, and reiterated in the 2000 and 2010 Review Conference final documents to work for a nuclear weapons-free zone in the Middle East, Obama was unwilling to say “No” to Israel and “Yes” to an important step to reducing the dangers of nuclear war, said Gerson.

“As we have been reminded by the Conferences on the Human Consequences of Nuclear War held in Norway, Mexico and Austria, between the nuclear threats made by all of the nuclear powers and their histories of nuclear weapons accidents and miscalculations, that we are alive today is more a function of luck than of policy decisions.”

The failure of Review Conference is thus much more than a lost opportunity, it brings us closer to nuclear cataclysms, he declared.

Burroughs told IPS debate in the Review Conference revealed deep divisions over whether the nuclear weapon states have met their commitments to de-alert, reduce, and eliminate their arsenals and whether modernisation of nuclear arsenals is compatible with achieving disarmament.

The nuclear weapon states stonewalled on these matters.

If the nuclear weapons states displayed a business as usual attitude, the approach of non-nuclear weapon states was characterised by a sense of urgency, illustrated by the fact that by the end of the Conference over 100 states had signed the “Humanitarian Pledge” put forward by Austria.

It commits signatories to efforts to “stigmatize, prohibit and eliminate nuclear weapons in light of their unacceptable humanitarian consequences”. (IPS | 23 May 2015)

Photo: United States Secretary of State John Kerry addresses the 2015 Review Conference of the Parties to the Treaty on the Non-Proliferation of Nuclear Weapons (NPT) on April 27. The United States, along with the UK, and Canada, rejected the draft agreement. Credit: UN Photo/Loey Felipe