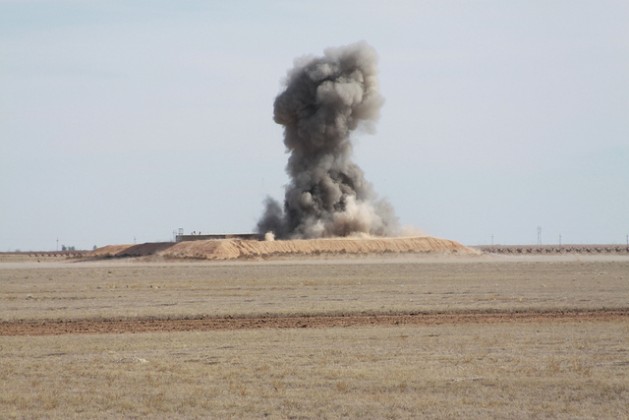 “They’re being fed two competing narratives about nukes,” he said, in a realistic assessment of the current state of play.

“Oracle 1 says everybody’s rushing to acquire them or to perfect them.”

Oracle 2 forecasts a big advance for nuclear disarmament, as the bandwagon for humanitarian disarmament continues to gain momentum, said Dr Ryddel, a former senior counsellor and report director of the Weapons of Mass Destruction (WMD) Commission.

“The irony is that if Oracle 2 is wrong, Oracle 1 will likely win this debate – and we’ll all lose,” he grimly predicted about the nuclear scenario.

In a recent cover story, the London Economist is unequivocally pessimistic: “A quarter of a century after the end of the cold war, the world faces a growing threat of nuclear conflict.”

Twenty-five years after the Soviet collapse, it said, the world is entering a new nuclear age.

“Nuclear strategy has become a cockpit of rogue regimes and regional foes jostling with the five original nuclear weapons powers (the U.S., Britain, France, China and Russia), whose own dealings are infected by suspicion and rivalry.”

Shannon Kile, senior researcher and head of the Nuclear Weapons Project at the Stockholm International Peace Research Institute (SIPRI) told IPS he agrees with the recent piece in The Economist that the world may be entering a “new nuclear age”.

“However, I would not narrowly define this in terms of new spending on nuclear weapons by states possessing them. Rather, I think it must be defined more broadly in terms of the emergence of a multi-polar nuclear world that has replaced the bipolar order of the cold war,” he added.

Kile also pointed out that nuclear weapons have become core elements in the defence and national security policies of countries in East Asia, South Asia and the Middle East, where they complicate calculations of regional stability and deterrence in unpredictable ways.

This in turn raises risks that regional rivalries could lead to nuclear proliferation and even confrontation that did not exist when the nuclear club was smaller.

Meanwhile, the signs are ominous: the negotiations to prevent Iran going nuclear are still deadlocked.

Saudi Arabia has signed a new nuclear cooperation agreement, presumably for “peaceful purposes”, with South Korea; and North Korea has begun to flex its nuclear muscle.

On March 20, Hyun Hak Bong, North Korea’s ambassador to the UK, was quoted by Sky News as saying his country would use its nuclear weapons in response to a nuclear attack by the U.S.

“It is not the United States that has a monopoly on nuclear weapons strikes,” Hyun said.

The Economist also pointed out that every nuclear power is spending “lavishly to upgrade its atomic arsenal.”

Russia’s defence budget has increased by over 50 percent since 2007, a third of it earmarked for nuclear weapons: twice the share of France.

China is investing in submarines and mobile missile batteries while the United States is seeking Congressional approval for 350 billion dollars for the modernization of its nuclear arsenal.

Kile told IPS a subsidiary aspect of the “new nuclear age” is more technical in nature and has to do with the steady erosion of the operational boundary between nuclear and conventional forces.

Specifically, he said, the development of new types of advanced long-range, precision guided missile systems, combined with the increasing capabilities of satellite-based reconnaissance and surveillance systems, means that conventional weapons are now being given roles and missions that were previously assigned to nuclear weapons.

“This trend has been especially strong in the United States but we also see it in [the] South Asian context, where India is adopting conventional strike systems to target Pakistani nuclear forces as part of its emerging limited war doctrine.”

Kile also said many observers have pointed out that this technology trend is driving doctrinal changes that could lead to increased instability in times of crisis and raise the risk of the use of nuclear weapons.

“What these developments suggest to me is that while the overall number of nuclear warheads in the world has significantly decreased since the end of the cold war (with the fall of the Berlin Wall in November 1989), the spectrum of risks and perils arising from nuclear weapons has actually expanded.”

Given that nuclear weapons remain uniquely dangerous because they are uniquely destructive, “I don’t think anyone will dispute that we must redouble our collective efforts aimed at reaching a world in which nuclear arsenals are marginalised and can be eventually prohibited,” he declared. (IPS | 27 March 2015)