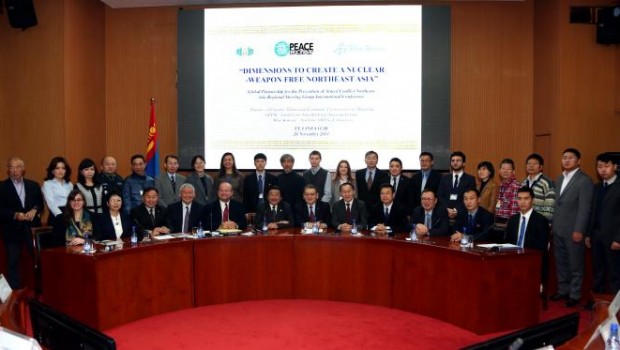 GENEVA (IDN) - While existing tensions in Northeast Asia continue to be a source of concern and urgent action is required to diffuse these and bring about meaningful cooperation, a nuclear-weapon free zone (NWFZ) in the region is possible and should in fact be a priority, according to an international conference held in Ulaanbaatar, Mongolia, on November 26. [P] ARABIC | JAPANESE TEXT VERSION PDF

Mongolia’s single-state NWFZ is a strong illustration of leadership in this area, and should serve as an example to other states wishing to take action against nuclear weapons and the dangers they pose, final document of the international Conference ‘Dimensions to create a Nuclear-Weapon Free Northeast Asia’ stated.

The Global Partnership for the Prevention of Armed Conflict (GPPAC) Northeast Asia and Blue Banner, Ulaanbaatar Focal Point of GPPAC, organized the conference under the auspices of the Ministry of Foreign Affairs and Economic Development of Mongolia.

Over 60 people, including civil society representatives and scholars from Guangzhou, Hong Kong, Kyoto, Pyongyang, Seoul, Taipei, Tokyo, Ulaanbaatar and Vladivostok, as well as representatives of the GPPAC Global Secretariat in The Hague, attended the conference.

The conference considered “Mongolia's nuclear-weapon-free status and the role that the country could play in promoting greater confidence, stability and non-proliferation in the region”. It reaffirmed the participants’ commitment to conflict prevention, peace-building and non-proliferation in the region, as reflected in the previous statements of GPPAC Northeast Asia in the 2005 Tokyo Agenda, the 2006 Mt Kumgang Action Plan, and the 2007 and 2010 Ulaanbaatar statements.

Hence they welcomed the holding of two conferences on the humanitarian impact of nuclear weapons in Oslo, Norway in 2013 and in Nayarit, Mexico in 2014, and the civil society involvement therein.

The Oslo conference addressed the consequences of a nuclear weapon detonation through a humanitarian lens, while the Nayarit conference allowed a deeper understanding of such consequences focusing on long-term effects as well as effects on public health, environment, climate change, food security, displacements and development.

They said that they expected third conference, to be held in Vienna on December 8 and 9, to highlight further the urgency of abolishing nuclear weapons by hearing further testimonies, looking at consequences of nuclear weapon tests, and the risks of human and technical error and would contribute to starting negotiations aimed at eliminating nuclear weapons.

Therefore they called upon civil society organizations to take an active part in both the governmental conference and the civil society forum being organized by ICAN (International Campaign for Abolition of Nuclear Weapons) on December 6 and 7 in Vienna.

Participants reaffirmed their conviction that the only effective guarantee against the use or threat of use of nuclear weapons was their complete prohibition and elimination through conclusion of international legally binding instrument to this effect.

In view of this, they rejected modernization of existing nuclear weapons and development of new types of such weapons as acts inconsistent with the goals and obligations of nuclear disarmament.

They welcomed the decision of the General Assembly of the United Nations to designate September 26 as International Day for the Total Elimination of Nuclear Weapons, the convening in 2013 of a high level meeting on nuclear disarmament and its outcome, and called upon states to convene the second meeting not later than 2018 so as to identify concrete measures and actions to eliminate nuclear weapons in the shortest possible time.

In the interim, they called on the international community to commence negotiations and adopt without delay a universal and legally binding instrument on negative security assurances. The conference also expressed its support for the Republic of the Marshall Islands' Nuclear Zero lawsuits, holding the nine nuclear-armed nations accountable for failing to comply with their obligations under the Non-Proliferation of Nuclear Weapons (NPT).

The participants discussed at length the preparations for the 2015 NPT Review, which was the cornerstone of the disarmament and non-proliferation regime. They called upon nuclear-weapon states to fully comply with their obligations to nuclear disarmament under Article VI of the NPT, and fully implement the 13 practical steps towards nuclear disarmament agreed upon at the 2000 NPT Review Conference as well as the Action Plan adopted at the 2010 Review Conference, in particular Action 5.

The conference reaffirmed the important role that NWFZs play in strengthening regional and international security, and expressed support for strengthening the existing ones. In that respect it expressed concern that despite the agreements reached by the states parties to the NPT in 1995, 2000 and 2010, the international conference on the establishment of a Middle East NWFZ had not been held and expressed the hope that such a conference would be held before the 2015 NPT Review Conference.

According to the final document, the participants expressed concern over the persisting tensions in the Northeast Asian (NEA) region, including on and around the Korean peninsula. They believed that the Six Party Talks (involving South Korea and North Korea, China, Russia, Japan and the U.S.) still could play an important role in addressing some of their causes, and that other forms of dialogue to contribute to a permanent peace regime be sincerely pursued.

“The participants believed that confidence-building measures to improve relations and a broad approach to addressing this issue, including the feasibility of establishing a NEA-NWFZ, were practically useful, and that the nuclear umbrella and extended nuclear deterrence needed to be given up altogether.”

The conference welcomed the Mongolian President's proposal to promote the Ulaanbaatar Dialogue on Northeast Asian Security as an effective way to reduce mistrust and promote mutual understanding and greater confidence.

It expressed the view that civil society needed to play its role in promoting understanding and dialogue in the region and reiterated their commitment to continue cooperation of civil society organizations with a view to developing and strengthening a shared vision for a peaceful and stable Northeast Asia, as the Ulaanbaatar Process proposed by GPPAC Northeast Asia in 2007 and currently in preparation.

The potential agenda for future dialogue sessions was to focus not only on traditional peace and security issues, but also include more comprehensive aspects such as economy, the environment, sustainability, disaster relief, gender, human security and the potential role of civil society.

The participants welcomed Mongolia's nuclear-weapon-free zone policy both as a concrete contribution to regional stability, and as an innovative approach to addressing nuclear threat-related issues. They welcomed the joint declaration of the five nuclear-weapon states whereby the latter pledged to respect Mongolia's status and not to contribute to any act that would violate it. The participants expressed the hope that Mongolia's example would be an inspiring example in addressing similar cases.

Further: The participants reaffirmed their support for global efforts to promote nuclear disarmament and conflict prevention in which civil society could play an important role. They, therefore, supported various civil society led campaigns and efforts such as the ICAN, Mayors for Peace, the various national and international campaigns to end the Korean War, and those to protect and promote Article 9 of the Japanese Constitution. IDN-InDepthNews – 27 November 2014]