NEW YORK (IDN) — When the world’s five major nuclear powers—the US, UK, China, France and Russia—pledged to prevent nuclear wars and abandon the pursuit of more weapons, their joint statement released January 3 explicitly left out several of the demands from anti-nuclear activists, including an end to the upgrading and enhancing of existing arsenals. [2022-01-09-24] CHINESE | GERMAN | JAPANESE TEXT VERSION PDF | SPANISH

Rebecca Johnson, director of the Acronym Institute for Disarmament Diplomacy, told IDN "the weak and inadequate statement" might have been welcomed because few people thought the five major powers—who are also the five permanent members of the UN Security Council—"would manage to agree on anything these days".

"Their nod in the direction of recognizing that nuclear wars should not be fought would have been great if they had followed up with relevant actions."

"Yes, of course, they need to avoid military confrontations and not target each other, but what about signing the UN Treaty on the Prohibition of Nuclear Weapons (TPNW) and eliminating the thousands of weapons in their nuclear arsenals?" she asked.

"But no, after reiterating the 1985 Reagan-Gorbachev statement that 'a nuclear war cannot be won and must never be fought', this statement ignored the TPNW and offered no concrete disarmament actions to give meaning to those words," she pointed out.

This was barely even gesture politics, as they also ignored the fact that there are actually nine nuclear-armed states, not just five, and all of them are busy upgrading and enhancing their nuclear arsenals, said Johnson, who is the founding first president of the Geneva-based International Campaign to Abolish Nuclear Weapons (ICAN).

She also said: "While condemning 'unauthorized or unintended' uses of nuclear weapons, these five proclaimed that nuclear weapons were okay if used for 'defensive purposes only. Was that supposed to reassure the rest of the world?"

Just one unauthorized, unintended, or so-called defensive use of nuclear weapons would cause a humanitarian catastrophe and be likely to spark a nuclear war. Beneath the rhetoric, she argued, there is dangerous arrogance and denial of reality.

"The way things are going, any of the nine nuclear-armed leaders could be foolish enough to launch nuclear weapons—by mistake or intention."

"As long as nuclear weapons continue to be possessed, advertised or brandished by anyone, the whole world is at risk of nuclear war. That is why more and more governments are adhering to the Nuclear Ban Treaty, which aims to end this kind of nuclear posturing and exert greater financial and political costs and pressures on the nuclear programs and ambitions of all the nuclear-armed states, whether they ignore it or not", declared Johnson

And, meanwhile, one of the realities is that the world has nine, not five nuclear powers.

The other four nuclear-weapon states—who are not parties to the Nuclear Non-Proliferation Treaty (NPT)—include India, Pakistan, Israel, and North Korea who collectively possess an estimated 461 nuclear warheads, according to estimates provided by the Stockholm International Peace Research Institute (SIPRI).

But all four were explicitly missing in action (MIAs) even in a follow-up statement by UN Secretary-General António Guterres, which also did not single out any of the nuclear powers by name.

So, they are strictly off-the-record and not for attribution. 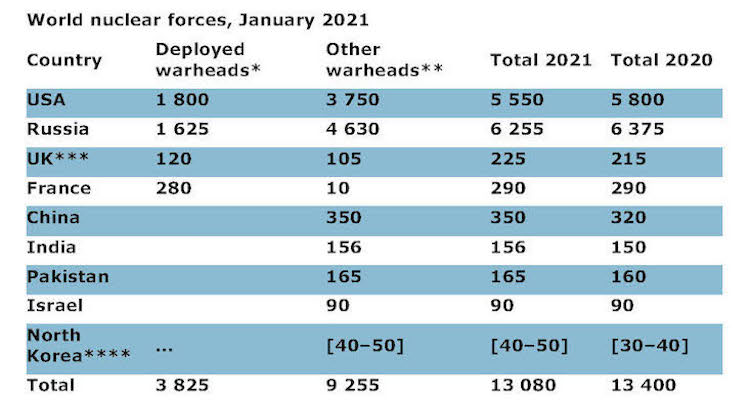 Source: SIPRI Yearbook 2021. All estimates are approximate. SIPRI revises its world nuclear forces data each year based on new information and updates to earlier assessments.

In a report released in 2019, SIPRI said both Russia and the United States were pursuing "extensive and expensive programs to replace and modernize their nuclear arsenals, missiles and delivery systems".

In 2018, the US Department of Defence set out plans to develop new nuclear weapons and modify others to give them expanded military roles and missions, SIPRI said in its briefing. "The nuclear arsenals of the other nuclear-armed states are considerably smaller, but all are either developing or deploying new weapon systems or have announced their intention to do so."

More than 50 years after the NPT entered into force, the behaviour of the NPT Nuclear-Weapon States points in the opposite direction, she noted.

“All of the nuclear-armed states, including the four outside the NPT (India, Israel, Pakistan, and North Korea) are engaged in costly programs to qualitatively upgrade and in some cases quantitively increase their nuclear arsenals”.

Despite these reassuring-sounding words, Cabasso said, the reality is that a new nuclear arms race is already underway.

"This time it is compounded by offensive cyber capabilities, artificial intelligence, developing hypersonic capacities, a return to intermediate-range delivery systems, and the production of delivery systems capable of carrying either conventional or nuclear payloads."

In 2010, she pointed out, the NPT States Parties agreed by consensus to reduce the role of nuclear weapons in security strategies. Twelve years later the opposite is true; that role has been expanded.

"With potential flashpoints over Ukraine and Taiwan, the risk of another use of nuclear weapons is as high as it has ever been. The nuclear disarmament process is stalled, and the five NPT Nuclear-Weapon States cannot credibly claim they are meeting their NPT Article VI obligations."

Obviously, the four nuclear-armed states outside the NPT will have to be involved in negotiations to eliminate nuclear weapons, declared Cabasso.

Dr M.V. Ramana, Professor and Simons Chair in Disarmament, Global and Human Security & Director, Liu Institute for Global Issues at the School of Public Policy and Global Affairs, University of British Columbia, Vancouver, told IDN the statement, by the five major nuclear powers, was evidently prepared for the NPT Review Conference (which was scheduled for the first week of January but postponed to August because of the spreading coronavirus pandemic).

"To me, that explains why the non-parties to the NPT are not part of the statement. Further, the statement implicitly extends to them in the sense that a nuclear war among them, say between India and Pakistan, cannot be won either and should not be fought."

"That said, I have two comments: First, the obligation to disarm applies not just to the nuclear-weapon states under the NPT but also the other four countries. In 1996, the International Court of Justice unanimously stated that 'There exists an obligation to pursue in good faith and bring to a conclusion negotiations leading to nuclear disarmament in all its aspects under strict and effective international control'."

That obligation applies to all states, he noted.

Second, while it is good to reiterate what was said decades ago by Reagan and Gorbachev, the statement is disappointing in not making any commitments to reverse the ongoing nuclear modernization process and continued investment in maintaining their existing arsenals, declared Dr Ramana.

In their joint statement, the leaders of the five major nuclear powers said: “We affirm that a nuclear war cannot be won and must never be fought. As nuclear use would have far-reaching consequences, we also affirm that nuclear weapons—for as long as they continue to exist—should serve defensive purposes, deter aggression, and prevent war. We believe strongly that the further spread of such weapons must be prevented".

"We reaffirm the importance of addressing nuclear threats and emphasize the importance of preserving and complying with our bilateral and multilateral non-proliferation, disarmament, and arms control agreements and commitments. We remain committed to our Nuclear Non-Proliferation Treaty (NPT) obligations, including our Article VI obligation 'to pursue negotiations in good faith on effective measures relating to cessation of the nuclear arms race at an early date and to nuclear disarmament, and on a treaty on general and complete disarmament under strict and effective international control'."

Meanwhile, the Federation of American Scientists (FAS) says despite progress in reducing nuclear weapon arsenals since the Cold War, the world's combined inventory of nuclear warheads remains at a very high level: Nine countries possessed roughly 13,150 warheads as of mid-2021.

Approximately 91 per cent of all nuclear warheads are owned by Russia and the United States who each have around 4,000 warheads in their military stockpiles; no other nuclear-armed state sees a need for more than a few hundred nuclear weapons for national security.

Globally, the overall inventory of nuclear weapons is declining, but the pace of reduction is slowing compared with the past 30 years. Moreover, all of that reduction is happening only because the United States and Russia are still dismantling previously retired warheads, the FAS said. [IDN-InDepthNews – 09 January 2022]