Stockholm Initiative Determined to Achieve the Elimination of Nuclear Weapons 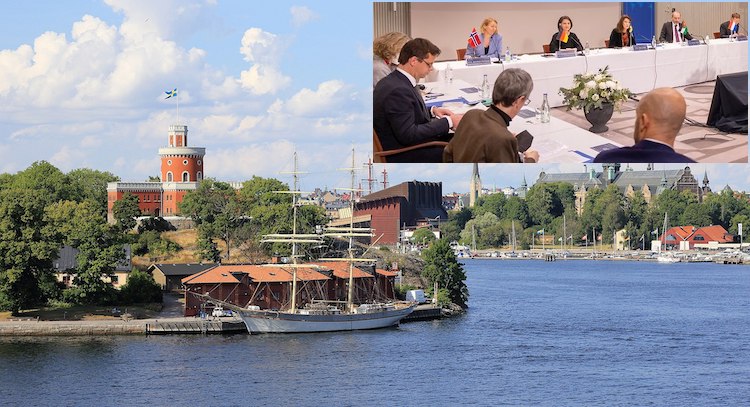 BERLIN | STOCKHOLM (IDN) — The 16-nation Stockholm Initiative for Nuclear Disarmament has urged the upcoming Tenth Review Conference of the Nuclear Non-Proliferation Treaty (NPT) from January 4-28, 2022, "to demonstrate political leadership, honour commitments and achievements made under the Treaty, and set ourselves on a decisive path towards a world free of nuclear weapons, in the interest of preserving humanity". [2021-12-25-22] ITALIAN | JAPANESE TEXT VERSION PDF | NORWEGIAN

Launched by Sweden in 2019, the Stockholm Initiative aims to inject fresh practical impetus into nuclear disarmament and build bridges between nuclear-weapon and non‑nuclear-weapon states.

The Group's fifth ministerial on December 14 in Stockholm further resolved: "We remain united in our resolve to achieve the elimination of nuclear weapons in an irreversible, verifiable, and transparent manner, and to reduce the risks they pose in the interim".

Ms Baerbock was appointed as Germany's Foreign Affairs Minister on December 8. 2021. Before her joining the Fifth Ministerial Conference first time, the Foreign Office in Berlin said: "Germany seeks to take on a leading role in bolstering international disarmament initiatives." This is indeed what the country did with Heiko Maas as Ms Baerbock's predecessor.

At the Berlin Ministerial 2020, Foreign Ministers adopted a declaration on the occasion of the 50th anniversary of the NPT including a set of proposals (“stepping stones”) to advance nuclear disarmament—measures ranging from full transparency on nuclear arsenals, stricter restraint in nuclear doctrines, steps to reduce escalation risks to the extension of the landmark U.S.-Russia New Strategic Arms Reduction Treaty (New START) in January 2021, further stockpile reductions and broader arrangements in the future.  All States parties were invited to sign up to these 22 Stepping Stones for advancing nuclear disarmament.

The Stockholm group gathered this time some three weeks ahead of the Tenth NPT Review Conference scheduled—two years after the Treaty’s 50th anniversary.

The fifth ministerial meeting said: "The upcoming NPT Review Conference is a pivotal opportunity for all states to show high- level commitment to nuclear disarmament. The Stockholm Initiative for Nuclear Disarmament has presented a feasible way forward in this regard. We offer our full support   to the President-designate of the Review Conference, Ambassador Gustavo Zlauvinen, in guiding delegations to secure the continued success of the Treaty."

The gathering welcomed the additional 20 NPT States Parties that have formally aligned themselves with the Initiative’s documents. Expectedly, the Stockholm Peace Initiative encourages all States Parties "to draw upon the language and feasible ideas contained in these documents, notably in the drafting of any outcome to the Review Conference".

The Stockholm Initiative Ministers not only welcomed New START, but also the June 2021 presidential statement announcing a U.S.-Russia Strategic Stability Dialogue, which included a reaffirmation by that "a nuclear war cannot be won and must never be fought".

These are no doubt positive developments that respond to two of the stepping stones for nuclear disarmament of the Stockholm Initiative. Ministers further noted the Summit Meeting between the U.S. and China held on November 16, 2021.

However, despite some progress, there is considerable work that remains to be done. The five NPT-recognized nuclear-weapon states need to reduce their nuclear arsenals, bearing a special responsibility to do so under the Treaty. Also evident is the clear unwillingness to disarm among other nuclear possessing states.

The fifth ministerial meeting noted: "Rebuilding trust and confidence among the nuclear-weapon states will help end the  longstanding stasis in global nuclear disarmament."

They urged all nuclear weapon states to take clear and decisive steps to lay the groundwork for next-generation arms control arrangements, to reduce or further reduce nuclear arsenals, to show leadership in putting a definite end to nuclear weapon test explosions, commencing negotiations on a treaty prohibiting fissile material production, as well as to support efforts to develop multilateral nuclear disarmament verification capacities.

Ministers reiterated their call in the “Stepping Stones for Advancing Nuclear Disarmament” to engage with the young generation, including through dialogue platforms, mentoring, internships, fellowships, scholarships, model events and youth group activities. They also reiterated their call to encourage visits to and interaction with communities affected by nuclear weapons, including Hiroshima and Nagasaki, and former nuclear test sites such as Semipalatinsk and in the Pacific.

Further, they remained resolved to integrate a diverse gender perspective and promote the full and effective participation of women in nuclear disarmament decision-making. [IDN-InDepthNews – 25 December 2021]