The US Builds A 'Systemic' Pact to Counter China's Growing Influence 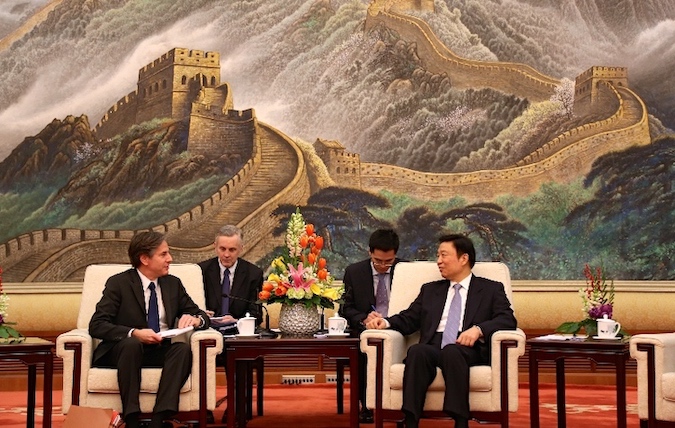 Thirty NATO allies agreed that “[we] will engage China with a view to defending the security interests of the Alliance. … China’s stated ambitions and assertive behaviour present systemic challenges to the rules-based international order and to areas relevant to Alliance security.”

Members of the alliance also called on NATO Secretary-General Jens Stoltenberg to develop a new strategic concept for adoption at the next year’s summit in Madrid. "For Washington, it was a win to have NATO, the cornerstone of the United States’ network of alliances, acknowledge the challenge posed by China and expand its predominantly trans-Atlantic focus," writes Daniel Baer, a senior fellow at the Carnegie Endowment for International Peace and former US ambassador to the Organization for Security and Cooperation in Europe (OSCE) from 2013 to 2017. The OSCE has 57 participating States from Europe, Central Asia, and North America.

The NATO statement was followed by the G-7’s focus (June 11-13 in Cornwall) on China’s human rights failures, in addition to the challenges from Beijing on security and rule of law: “we will promote our values, including by calling on China to respect human rights and fundamental freedoms, especially in relation to Xinjiang and those rights, freedoms and a high degree of autonomy for Hong Kong enshrined in the Sino-British Joint Declaration and the Basic Law,” the summit’s communiqué reads.

That, says Baer, is a step-up from the last G-7 in-person summit in 2019, which merely noted the Joint Declaration and Basic Law and called for violence to be averted, rather than actually calling for rights and freedoms to be respected. And the last summit statement contained no reference to the Chinese campaign against Uyghur Muslims in Xinjiang, which both Biden and U.S. Secretary of State Antony Blinken have said constitutes genocide.

The US-EU summit joint statement included a mutual pledge to coordinate policies and echoed the G-7 in making a direct reference to China’s menacing behaviour in the Taiwan Strait. "That had never before been mentioned in a joint statement between a US president and the EU leadership".

However, as Reuters reported, China on June 16 rejected and deplored the joint statement made by the United States and the European Union criticising China. The Chinese government firmly opposed any country imposing their own demands on other countries, Zhao Lijian, a spokesman from China's foreign ministry, said at a regular news briefing. This was in response to the US and the EU pledging to cooperate on a host of global issues including addressing China.

"The soup is never eaten as hot as it's cooked," remarked an observer. The EU is China's largest trading partner, and in 2020, China overtook the US in becoming the EU's largest trade partner. Most of this trade is in industrial and manufactured goods. Between 2009 and 2010 alone, EU exports to China increased by 38% and China's exports to the EU increased by 31%.

Besides, China came to Italy's aid when the country was at the epicentre of the COVID-19 outbreak this year in Europe when the EU failed to give medical assistance and supplies to Italy.

Against this backdrop, Daryl G. Kimball, Executive Director of the Arms Control Association has warned against "alarmism" and pleaded for engaging China on arms control.

He refers to recently leaked documents pointing out that for more than six decades, the United States has been worried about China's regional influence, military activities—and nuclear potential. For instance, in 1958, US officials considered using nuclear weapons to thwart Chinese artillery strikes on islands controlled by Taiwan. "Then, as now, a nuclear conflict between the United States and China would be devastating."

Also, Adm. Charles Richard, head of U.S. Strategic Command, warned in February: "There is a real possibility that a regional crisis with Russia or China could escalate quickly to a conflict involving nuclear weapons, if they perceived a conventional loss would threaten the regime or state."

Worse yet, adds Kimball, as tensions between the United States and China continue to grow, many members of Congress, along with the U.S. nuclear weapons establishment, are hyping China’s ongoing nuclear weapons modernization effort as a major new threat.

During testimony before Congress in April, Richard claimed that China's military is engaged in a "breathtaking expansion" of its arsenal of some 300 nuclear weapons. He argued that this requires fortifying the US nuclear armory, which is already 10 times larger than China's.

Instead, argues Kimball, US policymakers need to avoid steps that stimulate nuclear competition with China and pursue serious talks designed to prevent miscalculation and reduce the risk of conflict. The United States also needs to develop a realistic strategy for involving China and the other major nuclear-armed states in the nuclear disarmament process.

According to US projections, China could increase the size of its arsenal. It is deploying new solid-fuelled missiles that can be launched more quickly than its older liquid-fuelled missiles, increasing the number of its long-range missiles that are armed with multiple warheads, putting more of its intercontinental ballistic missiles (ICBMs) on mobile trucks, and continuing to improve its sea-based nuclear force.

"These moves, while concerning, do not justify alarmism. China is not seeking to match US nuclear capabilities. Rather, it is clearly seeking to diversify its nuclear forces so it can maintain a nuclear deterrent that can withstand potential US nuclear or conventional strikes," states Kimball.

Although China’s arsenal may be smaller, it is still dangerous. Beijing’s nuclear modernization efforts make it all the more important to pursue meaningful progress on nuclear arms control—particularly as the Chinese leaders claim to support non-discriminatory disarmament and minimum deterrence. "Yet they have said they will engage on arms control only when US and Russian leaders achieve deeper cuts in their much-larger nuclear arsenals."

The United States and Russia can and should do more to cut their bloated nuclear stockpiles. But as a nuclear-weapon state party to the nuclear Nonproliferation Treaty, China is also obligated to help end the arms race and achieve disarmament sooner rather than later, Kimball further argues.

A former Foreign Secretary of India and a former Ambassador to China Vijay Gokhale would appear to have a different perspective. In an OpEd in the eminent daily newspaper The Hindu, on March 20, 2020, Mr. Gokhale argued that Beijing has abandoned the ‘mantra’ of Chinese diplomacy.

He writes: "Chinese diplomats measured their words and kept their dignity. They projected power but rarely blustered. They were masters of their brief because Zhou (Premier Zhou Enlai) had taught them that the real advantage in negotiations was to know more than the other side."

In July of 1971, Premier Zhou Enlai met with Henry Kissinger, the National Security Advisor to US President, who was on a secret mission to China. Both sides made a public announcement that US President Richard Nixon would be invited to visit China soon.

The Zhou policy was continued in the 1980s when Deng Xiaoping took up the reins. "Deng died in 1997. China prospered just as Deng had imagined… A new generation of diplomats, with knowledge of the English language and a careerist mindset, has started to whittle away at the anchors laid down by Zhou and Deng. Arrogance has replaced humility. Persuasion is quickly abandoned in favour of the stick when countries take actions contrary to Chinese wishes," concludes Mr. Gokhale. [IDN-InDepthNews – 27 June 2021]