Mayors for Peace Call for a Common Ground on the NPT 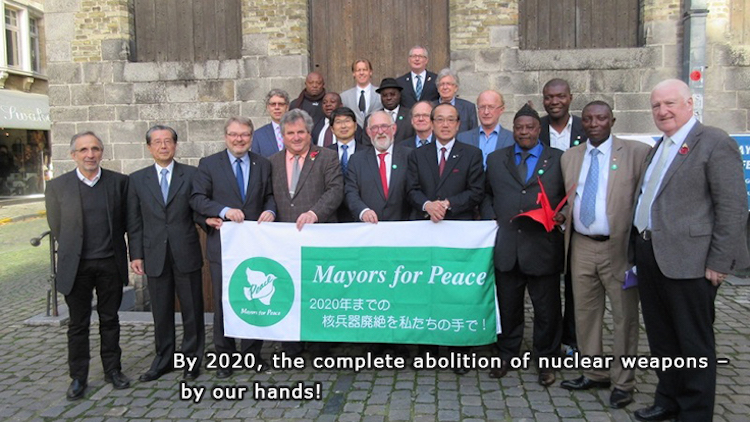 NEW YORK (IDN) – In anticipation of the review conference of the Treaty on the Non-Proliferation of Nuclear Weapons (NPT) in 2020 at the United Nations, the Mayors for Peace have in a Joint Appeal called for finding a "common ground on the NPT"; because the global interest embodied in the NPT is in the national interests of all countries and all peoples worldwide. [2019-05-13]

The Mayors of Hiroshima (Kazumi Matsui) and Nagasaki (Tomihisa Taue) – the only two cities in the world that suffered atomic bombings – issued a joint appeal on behalf of the Mayors for Peace in their capacities as President and Vice President of the worldwide organization campaigning for a world free of nuclear weapons. They were joined by T.M. Franklin Cownie, Vice President of Mayors for Peace and Mayor of Des Moines, Iowa.

"We view the NPT as one of the most important treaties of the post-World War II era.  With a membership just short of the United Nations Charter, this treaty embodies a near-global consensus on the basic proposition that international peace and security would be strengthened in a world free from the existence or proliferation of nuclear weapons," says the appeal on May 10, 2019.

It adds that they recognize the NPT as "the only multilateral instrument binding the recognized nuclear-weapon states to pursue negotiations in good faith on nuclear disarmament".

The Mayors point out that the NPT Review Conference is to be held on the treaty’s fiftieth anniversary. With this in view, they appeal to all delegations to focus their deliberations on expanding their common ground on the fundamental objects and purposes of this treaty.

"The future success of the NPT will depend heavily upon diplomatic bridge-building among delegations, reinforced by a common commitment to ensure the effective implementation and achievement of the treaty’s principal goals," the Mayor emphasise.

They understand that parties to complex multilateral treaties often disagree over such matters as degrees of compliance, appropriate methods for achieving treaty goals, the equity of various treaty commitments, and the never-ending competition from narrow national interests and short-term priorities.

But the Mayors call on all delegations not to allow such divisions erode the great common ground upon which all the states parties stand with respect to the NPT. They urge them to work to expand this common ground by engaging in earnest dialogue that transcends differences and to agree on innovative solutions to advance concrete nuclear disarmament and non-proliferation measures.

"We view the global interest embodied in the NPT as in the national interests of all countries and all peoples worldwide," the Mayors say. They recalli the inspirational words of the Einstein-Russell Manifestation 1955: “We appeal as human beings to human beings: Remember your humanity, and forget the rest.”

This is precisely the message that the hibakusha – the survivors of the tragic atomic bombings – most humbly wish to extend to the world and to future generations. "And we wish to convey their wishes today in this joint appeal and encourage all delegations to make the 2020 NPT Review Conference a success through bold initiatives to turn the confrontational security environment into one of cooperative security," say the Mayors. [IDN-InDepthNews – 13 May 2019]