Kazakhstan Calls for Rigorous Implementation of the NPT 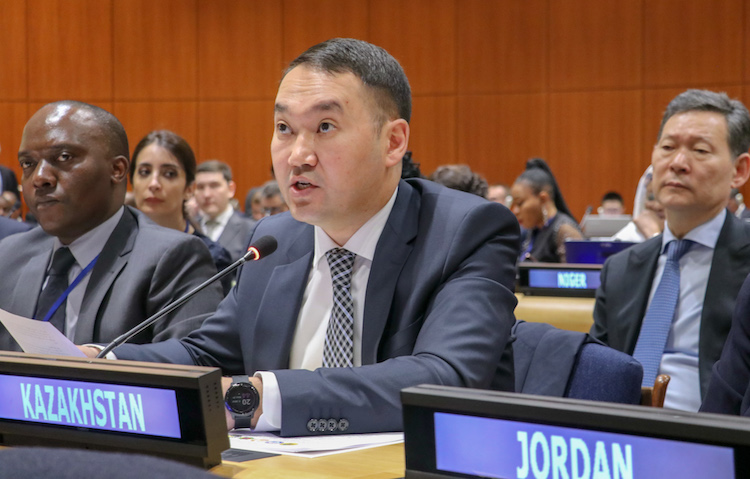 NEW YORK (IDN) – Kazakhstan, an active supporter of nuclear disarmament and strengthening the nuclear non-proliferation regime, has reiterated its firm support for the strict and complete compliance by all parties of the provisions of the Nuclear Non-Proliferation Treaty (NPT). [2019-05-03]

This was stressed by Deputy Minister of Foreign Affairs, Yerzhan Ashikbayev, head of the Kazakh delegation at the opening of the Third Preparatory Session for the 2020 NPT Review Conference on April 29, 2019 at the UN Headquarters in New York.

Ashikbayev opened the general debate with a statement on behalf of the Group of States Parties to the Treaty on a Nuclear-Weapon-Free Zone in Central Asia (the Semipalatinsk Treaty), which this year celebrates the 10th Anniversary of its entry into force. This zone remains the only nuclear-weapon-free zone in the northern hemisphere.

As the Acting Coordinator of the Central Asian zone, the head of the Kazakh delegation urged the United States to ratify the Protocol on negative guarantees (non-use of nuclear weapons) to the Semipalatinsk Treaty, as soon as possible, and expressed hope for the creation of further new nuclear-free zones in the world.

The non-nuclear-weapon States further undertake to accept safeguards administered by the International Atomic Energy Agency on all source or special fissionable materials in all peaceful nuclear activities within their territory or under their jurisdiction or control, with a view to preventing diversion of nuclear energy from peaceful uses to nuclear weapons or other nuclear explosive devices.

The Treaty guarantees the right of all States parties develop research, production and use of nuclear energy for peaceful purposes without discrimination and in conformity with their basic non-proliferation obligations.

The Kazakh delegation is organizing on May 3 a special event dedicated to cooperation between nuclear-free zones and exploring new ones so as to make the world safer and more security for humanity.

Kazakhstan approaches the preparatory session with another equally important anniversary date – the 25th Anniversary of its accession to the NPT. Speaking in his national capacity, Ashikbayev outlined the main milestones of Kazakhstan's activities over the past quarter century. He indicated its historical role in the collective multilateral action to strengthen the global security architecture.

Undoubtedly, as is widely known, all globally recognized achievements of Kazakhstan are based on the successfully implemented anti-nuclear initiatives of the First President, Nursultan Nazarbayev, Deputy Foreign Minister Ashikbayev said.

He pointed out that Kazakhstan, having lived through its unique path of denuclearization, remains firmly convinced that disarmament is the most effective confidence-building measure. In this regard, concern was expressed about the growing distrust both between nuclear powers and the interaction of nuclear and non-nuclear countries, undermining the effectiveness and unconditional implementation of all the provisions of the NPT.

As a significant contribution of Kazakhstan to achieve the common goal of the safe and reliable use of atomic energy for peaceful purposes, the Deputy Minister highlighted the establishment of the IAEA Low-Enriched Uranium Bank, which was inaugurated in 2017.

However, it will host storage material for the first time this year. Such a milestone therefore marks the practical launch of an unprecedented mechanism designed to ensure uninterrupted supply of fuel for nuclear power plants in case of political obstacles.

Diplomatic sources drew attention to Article VIII of the NPT that provides for the convening of a conference of Parties to the Treaty every five years in order to review the operation of this Treaty with a view to assuring that the purposes of the Preamble and the provisions of the Treaty are being realized. In 1995, in connection with the decision to extend the Treaty indefinitely, States parties agreed to strengthen the review process and continue to continue to hold Review Conferences every five years.

The Preparatory Committee normally holds a session of 10 working days in each of the three years leading up to a review conference. As decided by States parties in 2000, the purpose of the first two Preparatory Committee sessions is to consider principles, objectives and ways in order to promote the full implementation of the Treaty, as well as its universality, and to make recommendations thereon to the Review Conference.

To that end, each session should consider specific matters of substance relating to the implementation of the Treaty and Decisions 1 and 2 as well as the Resolution on the Middle East adopted in 1995, and the outcomes of subsequent Review Conferences, including developments affecting the operation and purpose of the Treaty.

The 2000 Review Conference agreed to a substantive final document, including practical steps for the systematic and progressive efforts to implement article VI of the Treaty on nuclear disarmament.

The 2010 Review Conference produced conclusions and recommendations for follow-on actions in the areas of nuclear disarmament, nuclear non-proliferation, peaceful uses of nuclear energy and the Middle East, particularly implementation of the 1995 Resolution on the Middle East. The 2005 and 2015 Review Conferences were unable to reach agreement on any substantive outcome documents. [IDN-InDepthNews – 03 May 2019]