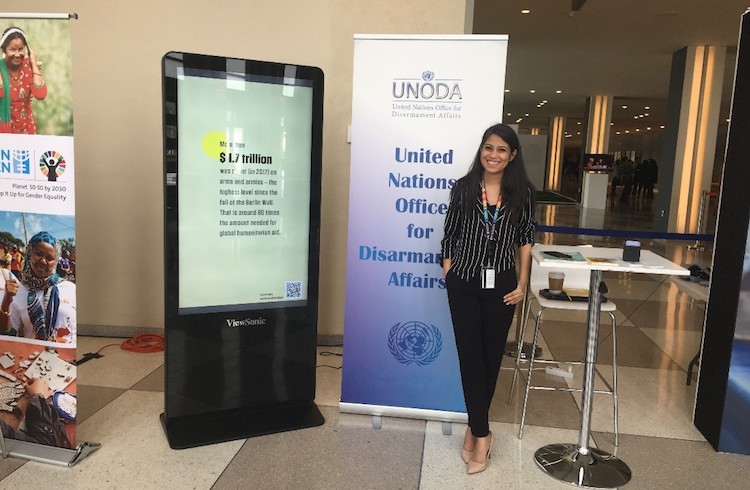 NEW YORK (IDN-INPS) – The United Nations played host to three important events in the month of April, focusing on youth engagement. The first of these witnessed the Office for Disarmament Affairs (UNODA) organizing “knowledge exchange” between young professionals from its offices in New York, Geneva, and UNODA’s three Regional Centres for Peace and Disarmament in Africa, Asia, and Latin America and the Caribbean. They shared inspiring ideas for future projects. [2019-04-24]

As a second event UNODA hosted a discussion with Peace Boat U.S. on the issue of nuclear disarmament. In the third and last event, UNODA interns created an exhibit on military expenditure and the sustainable development goals which an intern presented at the ECOSOC Youth Forum.

The following are extensive excerpts from a wrap-up drafted by Jonah Glick-Unterman, Trine Pejstrup, and Trushaa Castelino for the UNODA website:

On April 4, interns and young professionals from UNODA’s offices in New York, Geneva, Kathmandu, Lomé, and Lima participated in a video conference to share ideas for future projects and discuss strategies for advancing disarmament and engaging youth in the years to come.

Colleagues from the Regional Centre for Peace and Disarmament in Asia and the Pacific shared plans, already in motion, to engage national Model United Nations organizations around issues of disarmament and non-proliferation.

Staff from the Geneva Branch of UNODA reflected on prospects for partnering with educational institutions and developing gaming applications to advance the disarmament cause.

Interns from UNODA’s office at the United Nations Headquarters discussed social media platforms and the role of small states in promoting disarmament, as well as strategies for conveying abstract information, including military expenditure figures, in a manner  easily understandable by the average person.

The final presentation, given by members of the Regional Centre for Peace, Disarmament and Development in Latin America and the Caribbean, focused on constructing a larger database of translated United Nations documents and identifying agents of change for peace to bring attention to disarmament.

Following the presentations, participants discussed measures to reverse the trend of States turning away from disarmament towards military expansion, promote the United Nations Register of Conventional Arms, more explicitly tether disarmament to the Sustainable Development Goals, and coordinate amongst regional centres to reinforce partnerships.

On April 5, Peace Boat US and UNODA organized a luncheon on “Youth Ambassadors Working towards a Nuclear-free Future”. Peace Boat U.S. is an international NGO that has carried (figuratively) the Sustainable Development Goals as “ballast” on close to 70 around-the-world voyages promoting peace, human rights, and sustainability.

Emilie McGlone, the Director of Peace Boat U.S., and Selina Neirok Leem, one of the organization’s Ocean and Climate Youth Ambassadors, joined UNODA in welcoming participants for a free and open discussion on the current issues concerning nuclear disarmament. Selina, having grown up in the Marshall Islands and witnessing the horrible after-effects and consequences of nuclear testing, shared her experiences advocating for peace and disarmament on the Peace Boat.

Between 1946 and 1958, the U.S. tested 67 nuclear bombs in the Marshall Islands. The Marshallese were generally unaware of the potential health dangers that the testing posed to them and their environment, Selina emphasized, as she shared the stories of children playing in the “snow” of radioactive fallout at Rongelap.

Though the testing ended many years ago, the Marshall Islands – including Selina’s own extended family – are still suffering under the radiological legacy of nuclear testing with cases of cancer related to radiation, birth defects, and extreme environmental pollution still being pressing issues.

The discussion enabled participants to gain an insight into the work of the Peace Boat U.S. in their around-the-world quest to raise awareness of nuclear disarmament and the SDGs of the Agenda 2030.

April 8 kicked off the 2019 two-day ECOSOC Youth Forum, including its SDG Media Zone, which served as a platform for youth – including activists, digital media influencers, and media representatives – to discuss the Sustainable Development Goals and spur action on the 2030 Agenda.

As part of the exhibit, conventional arms intern Trushaa Castelino engaged youth participants on trends in military spending, which will be further highlighted during the Global Days of Action on Military Spending April 13 – 9 May 9, 2019. She focused discussions on militarized perceptions of security and the importance of creating alternatives to violence.

“The world spent 1.7 trillion last year on militaries and weapons. That number is so high, it has long left this universe in terms of relatability for most people. We’ve become so numb to it, that we accept it without question,” Castelino said, adding that “[While] states have an inherent right to security, it is important to encourage decision makers to question whether disproportionate military spending is creating more problems than it solves, and to encourage discussions on how this money could be better invested towards building opportunities for the future.”

The exhibit encouraged youth to act on the issue through accessible action steps like informing themselves, starting a club, hosting film screenings, facilitating discussions, voicing their concerns to public officials, and more. [IDN-InDepthNews – 24 April 2019]